Author of the essay On ne naît pas soumise, on le devient (You are not born submissive, you become it) (2018), the philosopher Manon Garcia delves into the work of Simone de Beauvoir to shed light on current feminist movements. She offers a new perspective of the work and personality of the author of Second Sex.

Even though she has undertaken the Art Games World Tour to meet those involved in the world of digital arts and video games, Isabelle Arvers looks at the place of female artists and developers in these domains around the world. She gives her analysis of the situation after having visited more than fifteen countries.

The producer and director Céline Tricart delivers committed messages through her films. For example the virtual reality work The Sun Ladies looks at an entirely female combat unit, “the sun ladies”, made up of women in the Yezidi community which fights Daesh.

Iman Mersal is an internationally renowned Egyptian poet who shows a confident female perspective in her works. In 1986 she launched the feminine journal Bint al-ard (Daughters of the Land) while she was still studying.

The Culottées - Des femmes qui ne font que ce qu'elles veulent (Brazen – women who only do what they want) comic book by Pénélope Bagieu paints portraits of women who have had to fight prejudices and taboos to be recognised and accepted. The work has been adapted into an animated series of 30 episodes.

5 episodes are available for free on IFcinéma on march 8th everywhere in the world (except France). 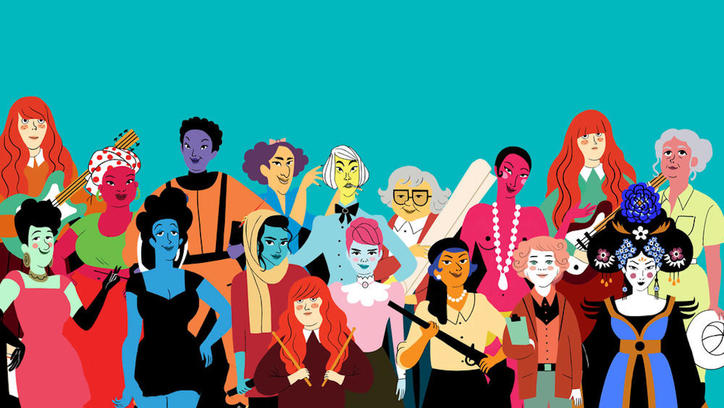 CHEF.FE looks back on the career of conductor Lucie Leguay and follows her as she prepares to lead the prestigious Les Siècles orchestra at the Philharmonie de Paris. This web-series by Camille Ducellier presents the career path of a woman in a male-dominated profession.

In a world of comic books that has been considered masculine for a long time, Catherine Meurisse, the first woman illustrator and comic book author elected to the Académie des Beaux-Arts  in 2020, has made a place for herself thanks to her talent. A look back in images on her career through ten plates exhibited at the Centre Pompidou for the exhibition Catherine Meurisse, a life in drawing.

See the portfolio Catherine Meurisse, a life in drawing