The figure of the octopus is at the heart of Laure Prouvost and Martha Kirszenbaum’s project. With its nine brains, eight of which are located in its tentacles, the octopus feels and thinks at the same time. “The octopus speaks from its limbs, it breaks down barriers. It will allow you to explore all the nooks and crannies of the French Pavilion” explains Laure Prouvost. The installation, entitled Deep See Blue Surrounding You/ Vois ce bleu profond te fondre, will be unveiled on 11th May. 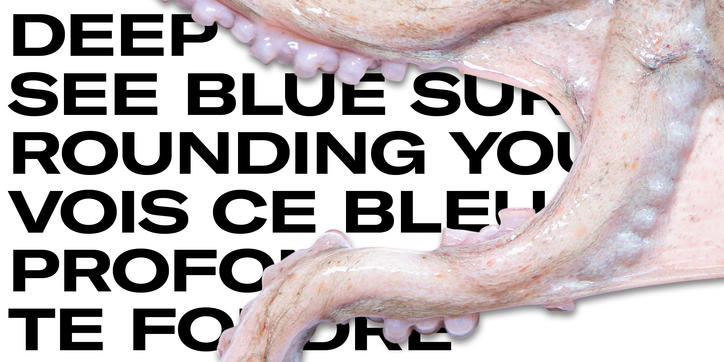 A female duo in the French Pavilion

In the footsteps of Sophie Calle, who transformed intimate moments from her life into artwork in 2007, and Annette Messager, awarded the Lion d’Or for her installation Casino in 2011, Laure Prouvost will be the third woman to make her mark on the history of the French Pavilion.

Born in 1978, a graduate of Central Saint Martins College of Art and Design and Goldsmiths College in London, Laure Prouvost creates immersive installations which examine the connection between cultural and personal history, and combine fiction with reality. The artist plays with words and images, in all kinds of media. Films, drawings, photographs, collages, texts, tapestries, ceramics and glass windows blur the boundaries between her imagination and the outside world. Language, however, remains her preferred medium. “I’m just a big liar”, she told Le Monde after winning the 2013 Turner Prize for her video Wantee, which introduces an imaginary grandmother, so-nicknamed as a result of her repeated question: “Do you want tea? ". Exhibited in London, Miami, Paris and Mexico City, the works of the visual artist thus incorporate the concepts of living together, identity and relationships with the other.

The great journey to Venice

In September 2018, the two women chose Cité Pablo Picasso in Nanterre as the starting point for a journey which aims to examine notions of generation and identity through places, languages and encounters and which would take them all the way to Venice. After leaving the Paris suburbs, Laure Prouvost and her team passed through Roubaix, then Drôme, heading for the Palais Idéal du Facteur Cheval. It is here that, in the night, Laure Prouvost and her team meet a band which follows them to Marseille, that port to the world and to the blue sea of the installation’s title.

As the images follow a retired radio producer, a karate instructor, a storyteller, a flautist, a priest, a rapper, and more – a whole gallery of"outsiders", to use the words of the artist and curator – truth and fiction intertwine. The artist slips in her invented family stories: those of Wantee ("my grandmother, who forced me to bring a tapestry she made to Venice! "), those of her grandfather, who decided to dig a tunnel from his London lounge to Africa, and draws a parallel between the mountainous spoil tips of the North and the pyramids, under which he may be found at this very moment…

Made up of complex and surreal moments, the film takes its immediate environment as its raw material and plays with words to render the invisible visible. A dual question is at the centre of the pair’s thinking: “Where do we come from? Where are we going? ". A question which has awakened in the artist a feeling of liquidity and fluidity, reflecting watery Venice.

The Anatomy of the French Pavilion

The origins of the project reach back to Laure Prouvost’s first visit to the French Pavilion. The artist says that she was inspired particularly by the Giardini, a huge garden where all the Nations exist side by side. Although she is not yet entirely certain of the final form the installation will take, she nevertheless states that she hopes for "an opening up to our neighbours, exchanges, deconstruction of the architecture and in particular the visitors' entrances, exits and movements", and perhaps even a tunnel to the British Pavilion!

A back-and-forth movement which can be found in a few keywords presented by Martha Kirszenbaum: “generations and identity, language and incomprehension, movement and liquidity, marginality, transgression and utopia, connectivity, cultural and commercial exchanges”. Ultimately, what Laure Prouvost wants most of all is “to give and exchange sensations: to become a tentacle ourselves”.

The Venice International Art Biennial will be held from 11th May to 24th November 2019.

The French Pavilion at the Venice International Art and Architecture Biennials is put on by the Institut français.

Image
Portfolio
« The crossing of disaster » by François Andes, in Brazil