The museum is a place of recognition and construction of values that has much confirmed what has come from the market.

Béatrice Joyeux-Prunel is professor in Digital Humanities at Geneva University. She has just published Naissance de l’art contemporain. 1945-1970. Une histoire mondiale (Birth of Contemporary Art. 1945-1970. A World History), the latest volume of her trilogy devoted to the avant-gardes’ transnational history.

Historically, museums have always been prescribers of ideals, both purveyors of a national narrative and key elements of cultural policy intended for an international audience. Is this paradigm changing today?

Museums’ history is intimately connected to that of nations and nationalisms. The greatest museums were founded in several waves. The first one being at the beginning of the 19th century, at a time when the French and English were organising campaigns in Egypt to bring back treasures, and the second at the end of the 19th century, in Germany and Northern Europe. A sort of national identity “kit” was gradually put into place: a museum, a large library, a major writer, and a united language were what was needed. At the end of the 19th century, this kit grew with the need to have a live art museum dedicated to national schools. Another interesting wave intervened in the 1950s, when museums that now took an interest in the avant-gardes were established, in France, Yugoslavia, Brazil, Argentina, and Japan. The museum therefore truly has a long history of mentoring with the constitution of national identities, and a certain number of ideals that are both aesthetic and socio-political. Has that changed today? Yes and no. Museums are still spaces for recognition. They play an almost sanctifying role. The ideal finds itself both strengthened and weakened. It is strengthened because in the end, the same works are almost always exhibited, through imitation. It is weakened by the postcolonial wave, which questioned this ideal by pointing out its ethnocentrism, male view of the world, and subjective progressive ideology.

In your work Les avant-gardes artistiques, 1848-1918. Une histoire transnationale, the first volume in your trilogy, you write that “the avant-gardes’ game was always geopolitical, playing a place off against another”. Is this observation still valid today?

I’m inclined to think so, and more than ever. From the end of the 60s, artist rankings like the Kunstkompass indicate nationality. Nothing has changed much since the Biennales were founded at the end of the 19th century, with their national pavilions set to compete with each other. Today, even if these pavilions sometimes welcome foreign artists, the questions of the press and the political arena remain the same: is our country “at its best”? Institutions certainly make an effort to try to move beyond this competition. Particularly because the curators are a cosmopolitan elite that has completely gone beyond nationalism. But museum and national pavilion directors are financed by States, which expect symbolic results for their countries.

You have just published Naissance de l’art contemporain. 1945-1970. Une histoire mondiale. In it you describe the birth of a world of art around several centres, with the set up of international informal networks. Should an opportunity to decentre narratives be seen, or a new form of levelling out which favours certain forms to the detriment of others?

I think paradoxically that the more competition there is, the more homogeneity there is. Everyone observes and compares each other, and ends up doing the same thing. Everything is certainly labelled and presented as being different. But the flow of images, people and objects, in a context of highly internationalised contemporary art, means that we end up reacting to the same things and the same situations. Those involved in the art world use this flow of images. Globalisation generates a “meme”, using the current meaning of the term in English: formulas which repeat, but also have a critical dimension.

Museums are still spaces for recognition. They play an almost sanctifying role.

To what extent does how museums work have to do with political – or even moral – positioning? Recently, the works of Claude Lévêque were taken down from the walls of MAMCO in Geneva. Are artist institutionalisation criteria in the process of changing?

The museum is a place of recognition and construction of values that has much confirmed what has come from the market. However the art market that was established from the 60s is – if we allow the term to be used – disgusting: unfair, misogynous, violent, often sadistic, contemptuous of the weakest. An artist of the time, who I mention in my book, revealed that an art dealer asked him for “perverted” art. What does that mean? When you look at Claude Levêque’s work in the light of what he is reproached for and what he seems to have admitted, even without a trial, one can ask how a museum can support that. Since the 60s, the market has absorbed this kind of work, because there was like a sexual liberation, but also because the museum had become a place where anything could be done. The “white cube” worked hermetically: what happened inside it did not come out. Today the white cube has gradually opened, and a back and forth as been created with society. It’s the fruit of an awareness that was first that of the artists themselves, who started pondering things from the 60s, particularly on the question of museums being financed by actors that generated their wealth through questionable activities: oil multinationals, Agent Orange in Vietnam, trafficking of Jewish property, etc. The press did not cover these controversies much, which persisted in the art world however. Little by little artists started to bring them to account. Up to then, museum curators resisted, but things are changing. Once again, the post-colonial movement has also played its role, with events like Documenta in 2017, directed by Paul Preciado.

For many years, you have used digital tools (distant reading, artificial intelligence) in your research. Have they allowed contributing to rendering other contexts visible?

We are all led to study things that are close to us: they come to us faster and more easily. This is why my first works on internationalisation quickly pushed me to dismiss the possibility of studying different cases one after another. I needed something with a wider view. From this point of view, exhibition catalogues, which became international from the beginning of the 20th century, are a precious tool. Digital enables hundreds or thousands to be studied at a time. Artificial intelligence makes collecting data easier, through optical character recognition and semantic text description. The computational approach brings out actors and places that were not those that we have access to on the face of it. It is not a foolproof method but it’s a start. This can also extend to image circulation: we can compare them with each other and study how they are distributed. This is a project, called Visual Contagions, that we are currently undertaking in Geneva. 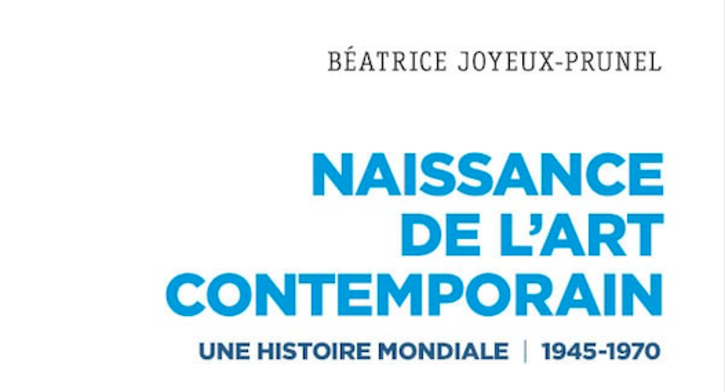 Béatrice Joyeux-Prunel participated to the "Book" seminar organized by the Institut français, by presenting her work during the webinar about the editorial trends in 2020 and 2021 in the field of human and social sciences.

Watch the webinar (in French only)

Image
Close up
Special mention to the French Pavilion, "Dreams Have No Titles" by Zineb Sedira, at the Biennale di Venezia !