My musical creations are born in the editing room

For 30 years, Béatrice Thiriet has shared her passion between film and opera scores. The composer recently gave a masterclass co-organized with the SACEM, devoted to film music and composition work for cinema, and discussed these issues with the directors of the Institut français' Fabrique Cinéma. Here, she talks about the importance of transmission and looks back at her creative work.

You learnt the piano as a child. Did you know then that you wanted to become a composer of film and opera scores ?

As a child, I knew I wanted to become a musician. It isn’t easy to imagine yourself as a composer, especially given that the history of music only features men! But I had a very strong desire. At the age of 6, I would write pieces for my mother and my friends. Even then, I was driven by a need to create.

How did your music come into contact with cinema?

Very naturally! I was a musician before I became a composer for films. My first film score, for The Window Over the Way (1993) by Jesús Garay, received a lot of attention. Soon after that, I was filming in Cuba when Pascale Ferran contacted me, asking me to work on his film Coming to Terms with the Dead and I felt something powerful. I was so lucky because he’s a great filmmaker, and we’re still working together 25 years later!

What I like about film is that the music is commissioned. It spares me the torment of the blank page: I have to listen to a proposal formulated in philosophical and poetic terms by another creator who is in the process of constructing their film.

The script seems to be a crucial part of your creative process...

I’m a literary person: I’ve written operas, songs, a book of musical analysis... I like writing, which is not the case for all musicians. For me, the script is very important, as it allows me to get involved in the creative process from the beginning, several months before the actual act of composing. I can hear the score in my head before I even start to write it. You need to be flexible, fast and efficient. But the script doesn’t always come first : for All the Beauty of the World, Marc Esposito – with whom I had already worked on Frenchmen – asked me to write a symphony to accompany his film, inspired simply by the setting, the history, the colours and scents of Bali, where the film takes place.

What role do you think music should have in a film ?

Music should have the role it is given. There are many methods but no rules! As a teacher – I have taught at the École Normale de Musique in Paris for two years now – I always tell my students that they need to remain free in their ideas. Every film actually has three authors: the filmmaker, the scriptwriter and the composer. A film score is more than a creation, it’s a third character.

My creations are born out of conversations and discoveries that I make in the editing room...

Over the course of your career, you have worked several times with Dominique Cabrera, Pascale Ferrand, Joël Farges and Marc Esposito. Have you forged any particular bonds ?

I think loyalty is a great thing! I work with as many women as I do men, my catalogue is very equal.When I work with a filmmaker, I listen to them to try and understand and « feel » them. My work as a composer consists of finding colours and rhythms, and allowing my imagination and creativity to benefit the musical project. I’m like a painter making a painting. My creations are born out of conversations and discoveries that I make in the editing room – that’s where my work really takes place.

In June, you met young filmmakers from developing and emerging countries who were taking part in Fabrique Cinéma. How important is it to you to support the younger generations ?

I want to pass onto the younger generations a desire to work with composers, and to give them confidence. These young filmmakers asked me lots of questions: how do you contact a composer ? How do you approach the first meeting ? Which instruments are best ? I talked to them a lot about Martin Scorsese’s work, which uses a combination of additional music and original scores created by great composers, as well as about my experience with filmmakers. Above all, I encouraged them to focus on the music for their films very early on. This masterclass will have achieved its goal if they ultimately all choose to create an original score!

In France, female composers for films are very much in the minority. Is equality in this line of work a battle you would like to fight ?

As a woman, I think it is essential to establish equality. In the Arts, like many other fields, women encounter significant problems in juggling family and working life. After two or three children, they stop... Equality would help to highlight female talents. Everyone has to make a real effort.

Of all your compositions, is there one that you would particularly highlight ?

There are lots ! Lady Chatterley (2006), The Other Shore (1996), Corniche Kennedy (2017), My Father’s Guests (2010), All the Beauty of the World (2005), which has just been re-released… I also like what I’ve done on Into the World, a film by Marion Laine that is coming out in France on 12 August : a quite symphonic, rock composition, with electronic tonalities. I like putting urban music to new uses.

What are your upcoming projects ?

A Czech documentary, with Joël Farges – Une guerre froide très animée – and The Sun is Slow to Rise, by Arben Ivanaj, a young Albanian filmmaker. 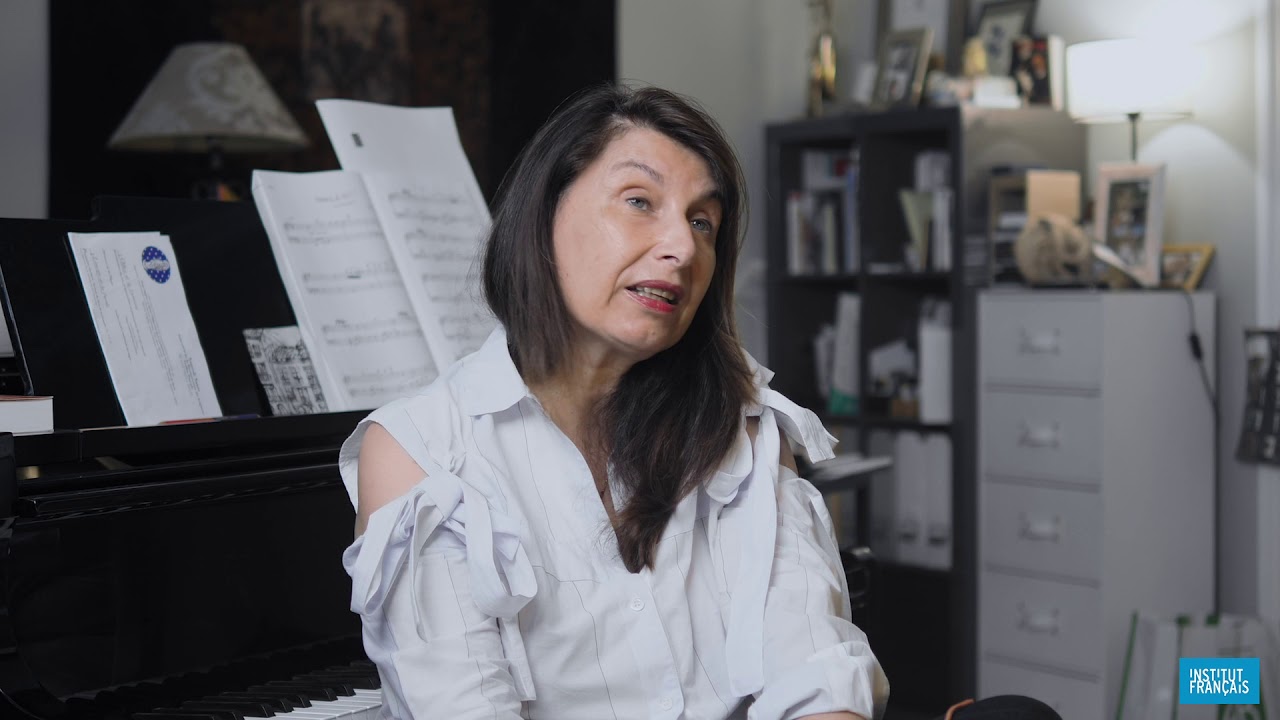 Béatrice Thiriet hosted a masterclass co-organized with the SACEM, devoted to film music and composition work for cinema, and discussed these issues with the directors of the Institut français' Fabrique Cinéma.

The Fabrique Cinéma programme, sponsored in 2020 by Rachid Bouchareb, promotes the emergence of young creation from Southern countries on the international market.