Hiku is both a show and an exhibition, based on the phenomenon of hikikomori in Japan. These are people who spend their entire lives at home, sometimes for several years.

The artists Capucine Vever and Anne-Sophie Turion, who were joint winners of the Michel Nessim Boukris 2021 Prize, have benefited from residencies in Senegal and Japan. They were able to immerse themselves in Dakar for Capucine Vever (with the support of the Résidences Sur mesures + of the Institut français) and in Kyoto, at the Villa Kujoyama for Anne-Sophie Turion. The Villa Kujoyama is an artistic establishment of the cultural cooperation network of the French Ministry of Europe and Foreign Affairs. It is part of the Institut français du Japon, works in coordination with the Institut français and benefits from the support of the Bettencourt Schueller Foundation, which is the main sponsor.

Could you each tell us about your respective careers and practices?

Anne-Sophie Turion: After training in stage design, I soon became a performer and author, combining directing, staging and acting. I have always worked on the border between the visual arts and the performing arts, trying to move between the spaces dedicated to them, whether it be the black box of the theatre or the white cube of the art world, by also articulating them with contextual proposals in situ in the public space. All these formats are often informed by the question of intimacy, on how to bring out all that is private and everyday. My work raises the question of the possible shift from inner territories to shared territories. These projects often feature a documentary dimension and question the zones of silence, fiction and exaggeration that encourage the emergence of this interiority.

Capucine Vever: I am a visual artist, and my approach is built on a relationship that is very much rooted in reality and territory. I work a lot from residencies, from immersion time in territories that are foreign to me: I am interested in what is hidden, concealed, buried, invisible, in presences that manifest themselves in a rather tenuous way. I work across film, drawing, photography and the installation of sculptural forms and each project finds its own medium of incarnation that can dialogue and make sense of the issues raised.

Can you present your projects, which have been awarded the Michel Nessim Boukris 2021 Prize? To carry them out, you both went on residencies abroad, in your case in Dakar, and in Kyoto, at the Villa Kujoyama, for Anne-Sophie. How did things take shape on location?

Capucine Vever: Dunking Island is a 35-minute video and sound installation that plays on six screens and eight speakers, inviting the audience to wander freely without the possibility of seeing all the screens at once. The audience is projected into the heart of a roam through the outskirts of Gorée Island, located in the bay of Dakar. The cameras' points of view are those of the ocean rising and eroding the island, a legacy of the slave trade. The ocean is the central character here, its surf, its traffic, its voice and its memory accompany us in its dizzying and metaphorical immensity. The 9-week residency at the Kër Thiossane centre in Dakar in 2021 allowed me to carry out fieldwork during which I met about twenty people: threatened inhabitants, fishermen, historians, and scientists. I wanted to approach the problem of rising waters from the ocean and not from the island. This desire to move the camera's point of view away from the coastline obliged me to take a 5-week diving course in Dakar to be able to think about the aesthetics of the images I was looking for. This time of immersion in the ocean was very intense and informed the visual considerations. Filming took place during the last month of the residency, and we experimented with a range of different capture devices with the director of photography Léo Leibovici.

Anne-Sophie Turion: Hiku is both a show and an exhibition, based on the phenomenon of hikikomori in Japan. These are people who spend their entire lives at home, sometimes for several years. It is a form of social disappearance, a phenomenon that affects nearly one million people. On location, the choreographer Eric Minh Cuong Castaing and I were able to make an initial investigation in 2020, which allowed us to start working with an association for the reintegration of hikikomori. The residency in 2022 at Villa Kujoyama then allowed Anne-Sophie Turion and Éric Minh Cuong Castaing to immerse themselves for a few months in the life of a hikikomori rehabilitation association and to establish a strong connection with some of them. A performative experience combining film, speech and choreography, HIKU offers us a meeting that might otherwise seem impossible: between French audiences with these individuals who have experienced radical social withdrawal. 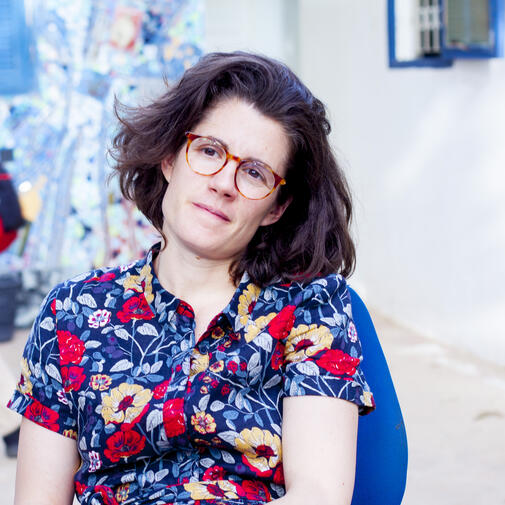 Personne Citée
Capucine Vever
Citation
In "Dunking Island", the ocean is the central character here, its surf, its traffic, its voice and its memory accompany us in its dizzying and metaphorical immensity.

The Fondation des artistes, which awards the Michel Nessim Boukris Prize, has supported you with €10,000 each for the production of your film installations. Capucine, this has led to an exhibition in Orthez in the first half of 2022. What next for your Dunking Island project?

Capucine Vever: Indeed, at the invitation of the director Cécile Archambeau, my solo exhibition Courir à l'infini (plus loin que tous les regards) was the occasion to show a first version of the installation. This project was the result of collaborations with two composers, Valentin Ferré who writes the music and with whom I have worked on all my sound productions since 2012, and the poet and composer Wasis Diop, who wrote the script and narrates the film, giving the story a form and bringing it to life. Wasis is from the Lebous, the indigenous fishing tribe of Dakar, and his house, located opposite the island of Gorée, is also suffering from erosion and rising waters. He was the perfect choice to voice the dialogue between a fisherman and the ocean in the film.

Anne-Sophie, what's the latest on your Hiku project?

Anne-Sophie Turion: We returned to Japan in August to continue with the project. We have already met about ten people who are beginning to re-establish links with society, albeit in a tenuous way. The association creates a kind of decompression chamber that allows them to reconnect with sociability and with the present. We have already made a lot of sound recordings, but now we will be able to start shooting video sequences and making portraits. In addition to the material we collect on site, we also work remotely during various residencies in France using telepresence robots, which allow these people to connect with us remotely and work with us on set. The idea is that the set becomes for them a place of expression and emancipation, which will allow them to speak in front of a French audience. The première is scheduled for autumn 2023, and will be followed by an exhibition.

Anne Sophie Turion: My new solo Happy End will be presented at the Actoral festival in Marseille. In it I imagine a journey that I haven't made to Denmark, the "land of happiness" according to all the rankings. It is an investigation into how one can travel mentally through the window of one's computer.

Capucine Vever: Dunking Island will be shown again in my next solo exhibition La peau de l'horizon qui nous entoure, at Galerie Eric Mouchet from September 3rd to October 8th 2022. I am also starting work on a new film project with the Flaine Art Centre in the Alps, which will look at the change in representation taking place in the high mountains as a result of the melting permafrost.

Capucine Vever benefited from the support of the Résidences Sur mesures + programme of the Institut français. Learn more about this programme

Image
Close up
French artists at the Bergen Assembly 2022