After graduating from the École Supérieure d’Art d’Aix-en-Provence in 2014, Chloé Desmoineaux has produced many projects. Interested in feminism, she creates media experiments involving performances, videos and even video games. Already the organiser of the Art Games Demos evenings, now she is also the curator of the exhibition “S’il vous play!” (“Please Play!”).

Where does this interest in video games come from?

I’ve been playing video games since I was little. From the very first PCs — the Windows 3.1 era — I was playing games on floppy disks. The art angle came later, at the Aix-en-Provence art school where I studied. We had courses which allowed us to analyse and create games, with the programming tools available to us.

I find it hard to think of video games as a separate art form. In my opinion, that's almost too restrictive: there are so many crossovers within video game projects, so many different designers coming from different artistic backgrounds... Yes, a game can be a work of art, but nevertheless it remains uncategorisable. The value of video games lies in the fact that they makes it possible to create connections between different mediums, such as cinema, music, etc. I feel that video games are a branch of the cultural industry, that they are at once a tool, a material, an artistic medium, and a type of media.

The French titles which have struck me recently are those by the studio Accidental Queens. These are smartphone games and are therefore very accessible.

What is your perspective on cinema? Doesn’t it involve a similar approach?

The difference between video games and films lies in the interaction with and involvement of the viewer. Certainly there are major parallels which can be drawn between the two, if only thanks to the blockbuster element and the high-budget titles which both industries produce, or the narrative approach of the plots, the importance of the characters, etc. These similarities are important to acknowledge, especially as the French National Centre for Cinema and Animation partially funds the video game industry.

So, does the recognition of video games require the involvement of the independent sector?

The independent sector is becoming increasingly important in terms of sales, and therefore of visibility. Various branches exist: there are quite commercial indie games, and then there is the more “experimental”sector in which I work. If I had to pick a French studio to mention, it would be the studio Motion Twin and the success of its Dead Cells. This studio interests me both due to its creations, and due to its cooperative model. They are proving that other economic models are possible, and this hasn't prevented them from creating a hit.

I think it’s important not to neglect the role of video games in development.

Dead Cells is a complex game… What French game would you recommend to a novice who would like to discover this so-called 10th art?

To discover the world of video games in its entirety, it’s hard to recommend just one game! The French titles which have struck me recently are those by the studio Accidental Queens. These are smartphone games and are therefore very accessible. This studio released A Normal Lost Phone and Another Lost Phone: Laura’s Story which simulate the protagonist’s phone. You have to explore it and solve puzzles using data present on the dummy mobile phone on the screen. It’s quite a subtle mix of voyeurism — because are going through someone else’s phone — and empathy. In another genre, there's also Bury me, my love (“Enterre-moi, mon amour”, from The Pixel Hunt studio, which I found had an interesting narrative style. You read a Syrian woman's instant messages, responding to them carefully as you try to influence her destiny. Through algorithms and hidden clues, the game is like a 2.0 version of a “Choose your Own Adventure” (editor’s note: reference to the 1980s series of books): it's more subtle than making choices of which the consequences you are immediately aware.

The travelling exhibition “S’il vous play!” brings together various technologies and independent video games, some of which are completely unfamiliar to the general public. What is the goal behind this exhibition, created in collaboration with designer Pierre Corbinais?

Pierre Corbinais and I wanted to create an exhibition focused small developers, with little-known and unusual games. We both come from the experimental scene: we wanted to present games which we found interesting due to their content, but also due to their mechanics and the experience they offer. It was important for us to also introduce video games created by people working outside the video game industry . The exhibition “S’il vous play!” emphasises creativity and political statements, through depicting things which are rarely found in this particular world. 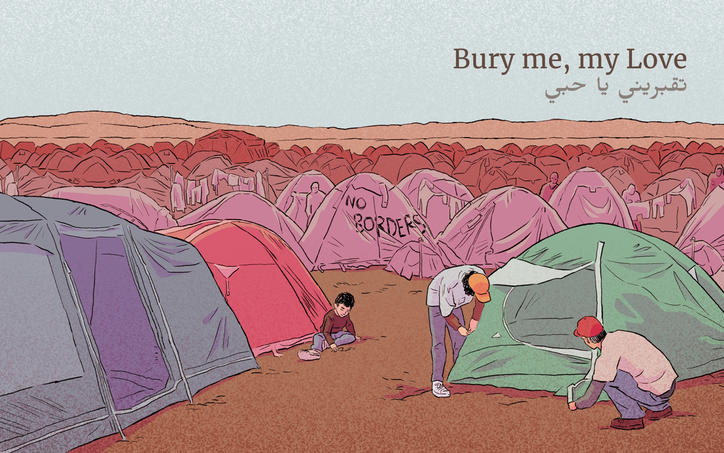 © Matthieu Godet / The Pixel Hunt
Bury me, my Love by Pierre Corbinais and Florent Maurin

Gender and feminism are important topics for you. You don’t hesitate to highlight works led by female characters. For you, is there necessarily a social or even political relationship between identity and video games?

My first instinct is to say no, not all video games are political! It’s not a necessity. But from another point of view, almost everything is political in an industry which claims to be neutral or apolitical. The majority of large productions are based in Western discourse, with stories based on colonialism, military contexts, pretty macho characters... When I ask people what they're playing, it always comes back to those games!

Video games are mass media. Some titles are even extremely popular: I recently spent several days in a school, where the children do dances and use lots of slang inspired by the game Fortnite! I think it’s important not to neglect the role of video games in development. It's worth coming up with new stories, imagining new heroes and heroines...

What projects are you working on for the coming year?

In recent years, I've mainly done exhibitions and curation. I really want to get my hands dirty again, or start a PhD. My coworkers and I are also considering organising a major month-long event which would take place in Bourges, bringing together several different areas of activity in a cultural wasteland. This would be closer to 2021, but I’m not saying any more! I would also like to produce a documentary on the alternative video game scene and the creators I have met there over the last five years.

Produced by the Institut français, the exhibition “S’il vous play!” has been touring internationally within the French cultural network abroad since 2018.

Find out more about the exhibition “S’il vous play!”