Divino Sospiro is on tour in France as part of the France-Portugal 2022 Season!

We called ourselves Divino Sospiro because music is the divine art. Before baroque, music was considered the direct link between the earthly kingdom and the heavenly kingdom.

The aim of the ensemble Divino Sospiro, founded nearly 20 years ago by the conductor Massimo Mazzeo and the violinist and music researcher Iskrena Yordanova, is to highlight the hidden treasures of Portuguese baroque music. They tell us how they go about this musical archaeology.

As part of the France-Portugal Season, implemented by the Institut français on the French side, a tour is bringing Divino Sospiro to Paris, Lyon, Metz and Tours.

Iskrena Yordanova and Massimo Mazzeo, you are originally from Bulgaria and Italy respectively. Can you tell us a bit about your stories and your careers? What made you decide to live and work in Portugal?

Massimo Mazzeo : I came to Portugal in the 90s, after travelling and living in several different countries. In Portugal, I found reasons to settle and realised that there was an opportunity to create something new.

Iskrena Yordanova : I’ve lived in Portugal since the 1990s, when I joined the orchestra of the São Carlos theatre in Lisbon.

You are both co-founders of Divino Sospiro. Can you tell us about the origins of your group? You call yourselves “divinos” (divine ones). Where does the name Divino Sospiro come from?

Iskrena Yordanova : Divino Sospiro was founded in 2004 with the aim of creating a quality baroque ensemble, which didn’t exist in Portugal at the time.

Massimo Mazzeo : We called ourselves Divino Sospiro because music is the divine art. Before baroque, music was considered the direct link between the earthly kingdom and the heavenly kingdom. During the baroque era, words played this role. Even though we are a baroque group, we believe that it’s music, not words, that creates a divine connection. The audience may not understand what is being sung, but they leave the venue as if they’ve been to heaven. Sospiro (sigh) was the name given to the musical note of the quaver, which lasts as long as a sigh or a surprised reaction.

The work of researching and recovering 18th century Portuguese musical heritage is one of the priorities for Divino Sospiro. How is this musical archaeology realised in order to highlight the work of composers that remain unknown today?

Iskrena Yordanova : In 2014, we founded the Centro de Estudos Musicais Setecentistas de Portugal at the Palace of Queluz, near Lisbon. Our aim was to perform operas and serenades by composers who worked on commission for the royal family. Every year, Divino Sospiro presents one of these pieces to the public. There are many musicology centres around the world, but it’s important that the result of the research is transformed into a performance, that it be heard by the public.

This work suggests that this heritage was forgotten or lost for a certain period: why did this happen?

Massimo Mazzeo : There are some Portuguese composers who were very famous in the 18th century, but who have now been forgotten. Their work is scattered through libraries across Europe. These old hand-written scores demand a huge amount of decoding and adaptation work. Music, like languages, has undergone many changes over the centuries. What’s more, these composers didn’t think about composing for posterity, they did it on commission from the royal court for a single performance. 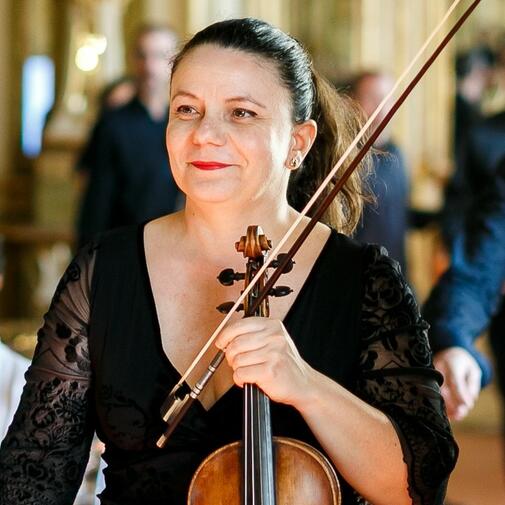 Personne Citée
Iskrena Yordanova
Citation
We founded the Centro de Estudos Musicais Setecentistas de Portugal at the Palace of Queluz, near Lisbon. Our aim was to perform operas and serenades by composers who worked on commission for the royal family.

One of the roles of Divino Sospiro is to help people learn about and appreciate Portuguese musical culture, and to spark the general public’s interest. How do you spark the interest of people from different origins, social classes and generations?

Massimo Mazzeo : We have to give everyone the opportunity to come to the concert venues and offer a varied repertoire. However, the people who run concert venues often prefer to put on famous pieces, as they know that the audience is already familiar with them. We live in an era of fast-food culture, that doesn’t leave any room for lesser-known works.

You will be performing the work of composers such as Francisco Antonio de Almeida and José António Carlos Seixas for your concerts in France, organised as part of the France-Portugal 2022 Season. What are the specific qualities of these composers’ musical production, and of Portuguese baroque more generally, compared to the production from the same period in France or Italy?

Iskrena Yordanova : Instead of making a comparison, I prefer to point out the connections that existed between these countries during the baroque period, and in that respect Mr. Almeida’s career is very significant. In the early 18th century, he was sent by the Portuguese king D. João V to study in Rome with Domenico Scarlatti. Mr. Seixas joined Scarlatti’s orchestra at the age of 16. He died young, at 32, but he was a remarkable composer.

Massimo Mazzeo : In order to stand out, Portugal decided to import Italian culture, which was so prized at the time. Domenico Scarlatti, the greatest composer at the time, was practically stolen away by D. João V, who brought him to Portugal when he was chapelmaster at the Vatican. Portugal therefore imported singers, theatre directors, composers, the crème de la crème, but it didn’t create its own identity, unlike Italy, Spain and France. France, for example, imported the Roman cantata, using it as a basis for the French cantate.

Massimo Mazzeo : It gets a very positive reception. One example is the concert we put on recently in Metz, as part of the France-Portugal 2022 Season. We presented The Death of Abel, an oratorio by Pedro António Avondado, a little-known work that garnered a near-hysterical reaction from the audience, in the positive sense of the term. This proves that we should take a gamble on bolder and more varied cultural offerings.

Divino Sospiro is on tour in France as part of the France-Portugal 2022 Season, implemented by the Institut français for the French segment.

Find out more about the France-Portugal 2022 Season

Image
Interview
Fabienne Azzaro presents FAIR, a scheme in the field of contemporary music supported by the Institut français