It seems to me that the relationship to the works is intrinsically linked to the context of the exhibition.

Elise Morin is an artist. She is interested in objects and materials that feed into an aesthetic in which regeneration questions reality, beyond its poetical aspect. She is exhibiting her installation Spring Odyssey (2020) at CHRONIQUES, the Biennale of Digital Imagination.

You studied in Paris, London and Tokyo and explore all kinds of media, from video art to installations, as well as virtual reality. Tell us about your career.

I studied at the École Nationale Supérieure des Arts Décoratifs in Paris. For my final degree project, I filmed an experimental documentary in Hong Kong and Shenzhen. After spending a few years in China, I completed a postgraduate degree at GEIDAI, the Tokyo Arts University. In Japan, hybridisation, a sense of fun, animism, craftsmanship and new technologies co-exist without any duality or hierarchy. I believe that it's largely due to this experience that I don’t work in a specific medium. Each time, I experiment with new processes to form links with a subject, a production method or a place.

You’re interested in people’s ecological footprint on the Earth. How do you translate this artistically?

The intention is to share experiences that try to shift the apocalyptic, contemplative or shocking discourse to find a space where living and non-living beings can co-exist. For example, in Data Mining Panorama (2017), I layered sequins of ferrous and non-ferrous metals as well as plastic materials from City of London trading computers. I wanted to use trading stations with a system containing ultra-sensitive data. This particular framework guides the form of the project and its reception, beyond the materials that make up the object. The electronic equipment embodies the growing tensions that are pulling apart two worlds, two opposing forces, two speeds: power and fragility, human action and the age of the Earth, the instantaneous and the geological.

How did you get into virtual reality?

I worked as Artistic Director on several virtual reality projects, in particular Fan Club (2019), which led me to understand the different uses and challenges of virtual reality. In 2015, the starting point of a research project, in which virtual reality was a relevant medium, was a call for tenders from the French Radioactive Waste Management Agency concerning the management of “eternal waste”. I became interested in the red forest, near the Chernobyl power station. Using virtual reality in the red forest breaks through a border that the body cannot naturally withstand.

You're exhibiting Spring Odyssey, an installation and virtual reality experience at Chroniques, the Biennale of Digital Imagination. How does your work echo this year's theme of eternity?

Spring Odyssey resonates with the sub-heading of the Eternity exhibition Part 2: “What do we want to grow on the ruins?” The work intimately links science, art and technology in a multimedia system proposing a space between the real and the virtual, a mixed experience around the invisibility of radioactivity and the inaccessibility by bodies in the Chernobyl red forest. It's about positioning all beings on an equal level – human, animal, vegetable, mineral, technological, even radioactive waste. Between fragility, strength and resilience, our relationship to this world is traced through the complicity woven with the mutant plant, the common thread of the experience. Although this forest is a synonym for disaster and no-man's land, the Spring Odyssey project as a whole, which will also include an augmented reality app, focuses on the plants and animals that exist with the radiation. It’s a way of redesigning the world using all living organisms. This interpretation, in which compromise becomes a way of “living with something”, invites us to innovate and imagine other ways forward in which all these organisms could live together.

I don’t work in a specific medium. Each time, I experiment with new processes to form links with a subject, a production method or a place.

You’ve worked with scientists, musicians, engineers and most recently with biologists, as well as NASA, for the Spring Odyssey exhibition. How did these collaborations come about?

Following some research, I contacted Jacqui Shykoff from the Laboratoire Ecologie, Systématique et Evolution, who is interested in the origin and dynamics of biodiversity, and the evolution and functioning of ecosystems. We won the Coup de Pouce 2019 call for projects launched by the Diagonale Paris-Saclay for the Spring Odyssey project. This grant helped us to carry out research into the plant and to report the mutations and transformation of the plants on radioactive sites.

During the scientific expedition that took the plant into the red forest, I met Tim Mousseau, as well as other researchers, who have been carrying out research into the effects of radioactivity on organisms, populations and communities since 2009.

In 2011, during the WasteLandscape installation and its 60,000 sewn-together CDs, you declared that the role of installation was also to bear witness to its time and to root itself in the social and economic reality. In your opinion, how can art be embodied in reality?

The first WasteLandscape (2011) took place at Centquatre in Paris, in collaboration with the architect Clémence Éliard. We were in residence for six months, during which time we installed the work “in situ”. We worked with associations and residents in this sensitive area in the north of Paris to get their support and understanding for the project. The inclusive production process broke down socio-cultural barriers.

In Slovakia, in 2014, the exhibition curator Zuzana Pacakova asked the government for special permission so that the tablecloths on which the CDs are sewn and the assembly could be done by a team of prisoners. None of them had had any contact with contemporary art or been managed by women before. The scale of the project reinforced the contrasts between expectations, prejudices and reality. Despite the difficulties, this experience ultimately brought us together in a positive emotion of collective pride.

You place particular importance on the places where your works are exhibited. How do you make these choices?

It seems to me that the relationship to the works is intrinsically linked to the context of the exhibition. For example, for Water Carrier (2012), an installation in a public space in Košice, Slovakia, Zuzana Pacakova and myself worked on the perspective of an outdoor exhibition, focusing on a common theme: water. We used the artificial river that crosses the town as an exhibition space. To assemble the installation, we had to empty the river and re-fill it. This was one of the essential, founding actions of the project. Contrary to appearances, the river was not very deep, and the local residents were extremely surprised by this fact. This was an essential part of the artistic project, as the proximity between the work and the public also lies in the analysis and transformation of the space used. For Spring Odyssey, I began from the inaccessibility of an area, the red forest, to make the radioactivity tangible and use it to compose and experiment with virtual reality.

I also want to finish making the augmented reality app for Spring Odyssey. I'm working with a musician on a performance relating to this work, which should take place in Geneva in March 2021. If the health situation permits, an installation of Soli (2019) will be presented at the next edition of Art Basel in Hong Kong, in March 2021. 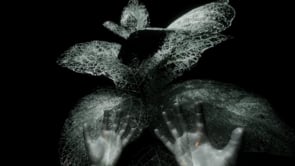 With the installation Spring Odyssey, Elise Morin is programmed as part of Chroniques, the Biennale of Digital Imagination (taking place from 12 November 2020 to 17 January 2021). The Institut français is a partner of Chroniques with the Focus digital arts and creations.

Find out more about the Focus digital arts and creations.