The disintermediation enabled by digital technology affects, it seems to me, the economic and social sphere as much as the spiritual sphere.

In his protean work, the artist Filipe Vilas-Boas questions our relationship to technology and in particular our quasi religious devotion to digital technologies. His work Scrollathon is presented in the Escape exhibition by the Institut français.

Can you tell us briefly about your career path? How did you get into digital art?

First of all, I must say that digital art is both the subject and the object of part of my work. Digital art in the current sense does not include its own analysis, or too little. Bernard Stiegler spoke of digital technology as automatic writing, and for me, fundamentally, it is about writing: my artistic practice goes back to my adolescence, with prose and poetry.

In addition to her work, my mother also worked for a long time as a public writer for the whole Portuguese community we lived in. She taught herself the language of Molière on the Île de Beauté, where we joined my father in the early 1980s. She learned her second language at the same time as her children: it was the only time when she allowed us to legitimately question her authority. To the great surprise of our friends, with my sister and brother, we were expressly allowed to correct her, including publicly, to improve her French: pronunciation, grammar, conjugation... As real "classmates", everything was a pretext for a good laugh. Equilibrium was certainly restored when we learned to speak and write Portuguese in turn. In any case, for me writing was a creative space, one of freedom, both a refuge and a way to connect with others.

Later, like many artists, I put my pen and my ideas to work in advertising. Although financially secure, working for a company soon proved to be restrictive. So I began to develop my artistic practice straight away as a safety valve, from year to year, from exhibition to exhibition, the side-projects became my main projects. I entered the job market just as the web was starting out, I did my training and earned my stripes with projects that sought to take advantage of this new horizontality made possible by digital technology: participation, interaction, generativity, non-linear writing... I was very interested in this, but as time went by, in my environment, I was disappointed to see around me that digital technologies - which had now moved from our desks to our pockets - were being exploited so little. The information age may have transformed communication and the media, but it did not disrupt our social structures, or at least not enough for my taste. Worse still! From certain angles, divisions are becoming more pronounced.

After fifteen years of loyal service, including setting up my own interactive design studio, I decided to take the plunge and concentrate on the study of the ethical and aesthetic implications of these hypermodern times. I had already been developing an artistic practice around the web, interconnection, social networks, and uses of digital technologies in general for ten years, and I thought it was time to devote myself fully to it.

On your website, we can read that your ambition is to "criticize the deviant uses of digital technology" (about your piece Mixed Feelings). How does contemporary art allow you to do this?

Because there is really no other framework where writing, data science, astronomy, music, machine learning, philosophy, robotics can interact. Art is one of the rare interdisciplinary spaces where we can freely combine research and creation. It is therefore the ideal experimental space for creating collisions or unexpected coalitions, linking together disciplines that never usually meet. I think I am also fulfilling a childhood dream of working in research. I have the feeling that each artist explores his or her own Mont Sainte-Victoire in his or her own way, and in the midst of the digital revolution, I would say that my own mountain, my topography, is encrypted, moving, controlled and also largely invisible. In this highly technical, and by definition, very exclusionary context, criticism is more than welcome. I like to develop it as much as I like to go beyond it. This is precisely the point of departure for my installation Mixed feelings: in it, I challenge police use of facial recognition technology to develop a form of artificial empathy.

You began your artistic practice in 2008. Almost fifteen years later, how has the Internet, which was already the focus of your work at the time, changed?

In fact, I have witnessed in part the birth and growth of digital art, which, at the beginning, was rather focused on the pixel as a new electronic gouache. However, as I explained to you, I had a personal interest in studying the transformations in the construction of identities, in access to writing, photography and icons, but also in the reconfiguration of economic and social structures. All of this was being shaken up by the digital age, and I wanted to deal with these issues. I had been working on projects about the interweaving of the digital and the public space for a long time, and my artistic practice has, in a way, followed the development of networks: from access to excess, from the utopia of global interconnection to cognitive capitalism, as the French economist Yann Moulier-Boutang calls it. This duality forms the core of my exploratory work.

Many of your works make the connection between digital technology and religion. How do you think religion informs our relationship to these new media?

First of all, simply because digital technology, as a globalising network, in a way achieves a union of people - or at least of half of the earth's connected population. In this, from my point of view, it partly short-circuits all the religious communities that precede it. The disintermediation enabled by digital technology affects, it seems to me, the economic and social sphere as much as the spiritual sphere. Digital technology also highlights what biology tells us, it electrifies, if I can say that, our links, our interdependence, that is to say the oneness of the world; a theme common to all human cosmogonies. Secondly, I would say that the consumerist ritual of buying goods and services that previously prevailed has now moved into the virtual realm of attention and time. We thus find ourselves like believers, hunched over tablets no longer made of wood but forged this time from some fifty rare metals: icons and symbols scroll by and we decipher them religiously, captured once more by a clever mixture of hope and oppression. Max Weber has written a lot about the relationship between belief and economics. Perhaps he should be read again in a digital light.

Apart from Scrollathon, which will circulate with the Institut français' new exhibition Escape, voyage au cœur des cultures numériques, where will we be able to see your work in 2022? What are your current and upcoming projects this year?

My work can currently be seen at the EDF Foundation, with the Poinçonneur de l’IA presented as part of the exhibition Fake News: Art, Fiction, Mensonge and at the Abbaye Saint-Léger de Soissons within the exhibition Deus Ex Machina, where my cross from the collective performance Carrying the Cross is on display. I will soon present my Mixed Feelings project at the Collège des Bernardins during the Croyances numériques (Digital Beliefs) one day event organised with Ouishare.

In March I will present six pieces and a performance as part of Máquina Mística, the contemporary art exhibition of the Canal Connect festival organised by Blanca Li in her Madrid theatre. At the same time, I will also take part in the group exhibition Le Palais des villes imaginaires at the Centre d'art contemporain de la Ferme du Buisson, in Noisiel, Seine-et-Marne. I will be presenting three projects on the topic of automation and the digital age.

At the beginning of May, I will launch a new piece in Le Mans entitled Animalités numériques, produced with my Breton maker friends, Makeme and Bistromatik. In mid-May, in Rennes, I will be back in video-play land with edulab Pasteur where I will continue to develop and present a musical project. The Share Festival in Turin will also cover similar ground.

In June, in Bagneux with the team of La preuve par 7 started by the architect Patrick Bouchain in connection with Le Plus Petit Cirque du Monde, and especially following the work carried out with two classes of the Leonardo da Vinci vocational high school starting last December, we will present a monumental installation powered by solar energy that will be placed in the future courtyard of the high school under construction on the hill of Mathurins.

Throughout the year, I am also participating in a travelling group exhibition supported by the MAAT Museum in Lisbon, Playmode: an exhibition that was created in Portugal in 2019 and will travel in 2022-23 to several major cities in Brazil, supported by the File Festival team. Meanwhile, thanks to SIANA, I am continuing a residency at the University of Evry, where I have been collaborating with a bioinformatics and mobile robotics laboratory for more than a year. We are working together on a new installation, La ligne rouge, which echoes the notion of biopolitics: the control of human flows is a very topical subject, as you will have noticed. The work features in the programme of the Arts-Science EXPERIMENTA biennial in Grenoble next autumn. 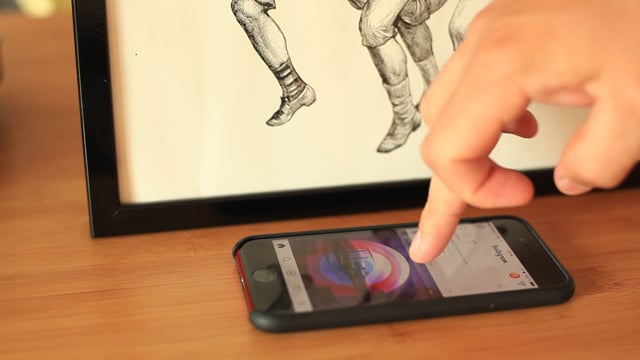 Scrollathon [ on Instagram ]
The Institut français and the artist
Image

Initiated by the Institut français, the Escape exhibition is presented by the French cultural network abroad (Instituts français, Alliances françaises…) and his partners.

Image
Interview
To mark the Immersive Experiences (XR) FOCUS organised by the Institut français, we meet the director of the Grand Palais Immersif, Roei Amit

Image
Interview
Jana Budkovskaja, founder of the platform OBJEKT, presents the Micro-Folies project in the framework of the FPEU

Image
Interview
Ismaël Joffroy Chandoutis, winner of a César in February 2022, is an artist in the Escape exhibition of the Institut français