The traduction reveals the extent to which a French author is French. Without actually realising it, we tend to include in our books a large number of things that are part of our culture.

Hervé Le Tellier, winner of the 2020 Goncourt Prize with his novel L'Anomalie (The Anomaly), participated in “L’Auberge du lointain” with nine of his translators in May this year. This one-week residency was held at the Collège international des traducteurs littéraires in Arles. Joint interview with Adriana Hunter, his official English language translator.

Your novel The Anomaly has already sold over a million copies and is currently being translated into about forty languages. What does this represent for you?

Hervé Le Tellier: As the book was already selling well in France, several publishers had optioned translations of The Anomaly before I won the Goncourt. Clearly the fact that I sold over a million copies gave me greater international visibility, along with the red band announcing the Goncourt prize. Both these factors hugely increase the chances of the book being read. This also gives my earlier books like All Happy Families, which has already been translated into English by Adriana, a new lease of life. It will now be translated into about ten other languages. So it has a great impact on an author’s situation.

Adriana Hunter: The Anomaly is the fifth book by Hervé that I have translated, and it has the potential to reach a very wide audience. It’s a real opportunity for a translator when such an interesting book goes on to become a bestseller.

You participated in the “L’Auberge du lointain” at the International College of Literary Translators in Arles from May 10 to 14, 2021. Was the time you spent in discussion with your translators an opportunity to discover your novel from new angles?

Hervé Le Tellier: We had created a shared electronic document beforehand so I had already received a lot of feedback from the translators. They helped me identify certain inconsistencies I had not noticed, as The Anomaly is a highly constructed book, which multiplies the possibility of errors. Every time the shared document was revised, I modified the French version of the book that was doing better all the time, which meant there were regular reprints. This exercise reveals the extent to which a French author is French. Without actually realising it, we tend to include in our books a large number of things that are part of our culture. So I had to explain some parts of the text, or discuss certain forms that are present in the novel, although I wasn’t really aware of them. For example, we spent a long time discussing the first sentence: “Tuer quelqu’un, ça compte pour rien”, translated by Adriana as “It’s not the killing, that’s not the thing”, which has a large number of phonetic, rhythmic and syntactical characteristics that are specific to detective novels.

Adriana Hunter: With regard to the elements specific to French culture, it can easily get very complicated. Should you replace the French reference with a reference that would work better for English readers? Or should you explain the French reference? In the field of translation you constantly have to compromise.

Do you adopt a specific technique to adapt certain stylistic effects, which are characteristic of the French language?

Adriana Hunter: I am of course aware they exist, but I ensure that my version is not more “distinctive” than the original text. Above all, I trust the author of the text: it’s like dictation. I respond to every situation I encounter by trying to make the text sound like a living entity, while being careful not to recreate something of my own.

Hervé Le Tellier: The Anomaly is not an experimental novel otherwise I would have pushed the different genres to their limits. I wanted to focus on readability: the genres are visible, but not radically so. Adriana is right when she says the text has a certain hue, but it is not strongly coloured, in order to avoid dispersal and focus on the suspense.

In The Anomaly, there is only one structural : it’s the anagram that appears when one of the characters wonders whether the title The Anomaly is not an anagram for something else. So how do you translate an anagram?

You are a member of OuLiPo (“Ouvroir de Littérature Potentielle”), a research group that explores the potentialities of language and literary innovation. In 2018 you participated in the Assises de la traduction littéraire in Arles, with an “atelier de traduction oulipienne” that you had suggested. Does The Anomaly also raise specific translation issues and to what extent is it an Oulipian work?

Hervé Le Tellier: I’ve been to Arles several times. I specifically remember a talk I gave about translating humour in 2018. I also conducted an Oulipian translation workshop, which was a workshop in “great ape” language. It was a corpus invented by Edgar Rice Burroughs for Tarzan: it’s a language spoken by great apes, made up of only three hundred words. So it was an imposed vocabulary that meant that all the translators were equal. Oulipian translation in fact raises two different issues that correspond to two types of Oulipian works. The ones where the constraints determine the language like in Perec’s A Void. When translating A Void, you don’t translate the text but the constraint. You translate a text in which the letter e does not appear, or you do without the letter that is the most commonly present in the host language. I recently received a translation that does not contain the letter a, which is the most commonly recurring letter in Catalan. In the case of a book like Life: A User’s Manual, there are clearly syntactical constraints, but we only realised that much later, after Perec died. So translators translated Life: A User’s Manual without taking that into account. When the constraints are concealed, they are invisible to both the reader and the translator. In The Anomaly, the constraints are not structural from a language perspective so there is no reason to take them into account. Indeed, there is only one, which was optimally resolved by Adriana: it’s the anagram that appears when one of the characters wonders whether the title The Anomaly is not an anagram for something else. So how do you translate an anagram? The different translators had to find different solutions.

For a translator how does a dialogue with the author influence the work of appropriation and translation of a text from its original language into the host language?

Adriana Hunter: I don’t ask the author any questions until I have finished the translation. I soon find a rhythm that I prefer not to interrupt. I also set certain rules for myself, like never leaving a blank and always finding a temporary solution for every problem. This happened several times with Hervé’s books. After writing to each other often in the past, we met for the first time at the residency in Arles. I think I was really lucky in comparison to some translators who had already published their versions, or others who had just begun and were not yet completely immersed in the text. For myself, I was already at the correction stage. So I was very familiar with the text, which allowed me to add the final touches.

What type of relationship do you have with your translators? Do you have regular discussions outside this type of residency?

Hervé Le Tellier: It depends on the languages. I can read the German or English translations, but I am obviously incapable of reading most of the other languages. But sometimes, even if I don’t speak the language at all, I have a good relationship with the translator. For example, with my Greek translator, who makes really relevant remarks about my books that lead me to think about my work. I even wonder whether I shouldn’t send my manuscripts to my Greek translator before publishing them in French. 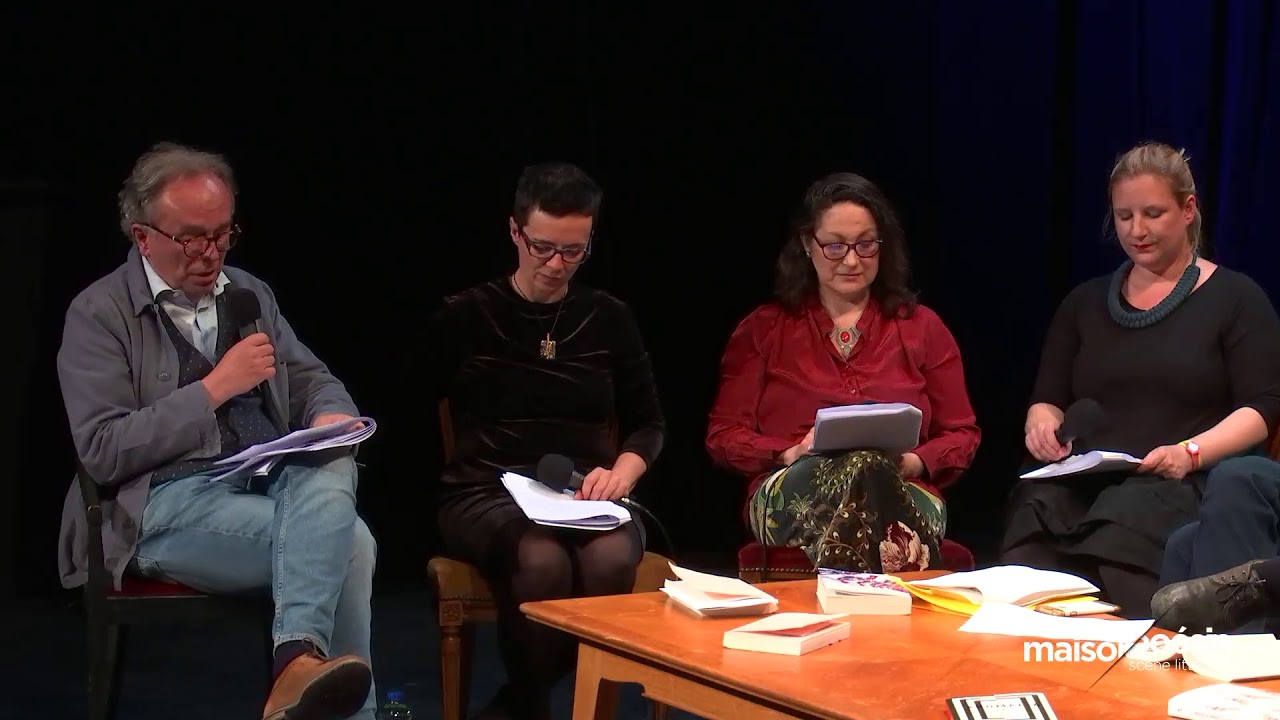 Institut français is a partner of « L’Auberge du lointain », a one-week residency at the Collège international des traducteurs littéraires in Arles, that reunited Hervé Le Tellier and nine of the translators of his novel L'Anomalie.