Taking action through words is a way to sharpen our awareness and hope for change in the world.

The young Haitian poet and author Jean d'Amérique has created a sensitive piece in which he writes powerfully about our society. He looks back on his discovery of literature and his current perspective on artistic creation.

After studying philosophy and psychology, you decided to dedicate yourself to writing. How did you discover literature and when did you first begin to write?

Rap was my gateway into literature and poetry. As a teenager, I discovered rap in Haiti during its golden age, between 2005 and 2008. I was eleven at the time, arriving in Port-au-Prince, and that pushed me to write my first pieces. I saw it as a reflection of my social condition, which was conveyed through the writing that I was listening to. I lived in a working-class, very unstable neighbourhood and I would see these young rappers in the limelight – it sent me a real message of hope. Later, literature teachers came into my life and opened the doors to books. I discovered authors who fascinated me, such as Frankétienne, René Depestre and Aimé Césaire, and it felt like I could find refuge in words. By writing, I was opening a window and could envisage a different world.

You are originally from Haiti but you now divide your time between your homeland and Paris. Can you tell us a little about your history?

When my first book came out, I was frequently invited to France for residencies or readings. After a lot of to-ing and fro-ing and endless requests, my artistic work has meant that I live here more often than not. But these past two years, I have started to experience that feeling of being elsewhere as a kind of exile, because it’s difficult to go back to Haiti whenever I like. The public health crisis has been one obstacle, and now the political situation is becoming very tense there, with instability increasing by the day. I have always experienced being elsewhere as an opportunity to open my windows to new atmospheres, new cultures, new ways to think about and see the world. Nevertheless, I do still feel rooted in my country to a certain extent, as I carry its imaginary world within me, something that very often comes out in my writing. I really like that term by the writer Jean-Claude Charles, “enracinerrance” (loosely translated as “roaming rootedness”), which speaks to the fact that we can roam around the world on a constant quest for our identity, while being rooted in something that has shaped us fundamentally.

As an author, playwright and poet, you write in multiple formats. How do you view your work based on these different media?

For me, the starting point is always poetry. Even if I venture into other literary genres, it’s always a poetic quest, be it in theatre or novels. I am quite concerned with the quality of the language that will convey the story I’m telling. That said, genres aren’t set in stone for me, I don’t worry about the form of a piece (meaning whether it’s a play, a novel or something else) when I start to create, I’m not preoccupied with it as I write. I often start with fragments and, gradually, it becomes a real project, and then I try to give it a precise form. But at the very beginning, I always have poetry in mind – for me, it is the mould in which all literature is cast. 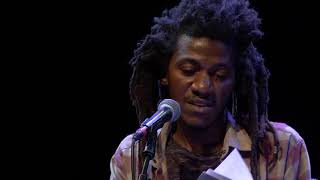 Through your writing, you talk perceptively about the reality of our world while also tackling major issues. Do you see writing as an outlet, a way to denounce our inhumanity or a way to change things?

I started to write because I was, and am, angry with the world we live in. So I think I write in the hope of transforming it, because I don’t think it’s a pretty sight. Writing gives me the power to be able to reject the world as it is and create a different one. I don’t look for subjects to write about, they come to me, urgently. I often use this example to describe the act of writing: when we put a blade to flesh, blood is shed, and it’s the same for words, which spurt out of a visceral need to have my cries heard. In the middle of this world, I am struck by a number of things that are happening around me and that lead me to write to tell the story of my time. Literature and words have a definite impact, even though it might take time. Our way of thinking comes from what we consume, and especially what we read. Taking action through words is a way to sharpen our awareness and hope for change in the world.

Since 2019, you have run the Transe Poétique international festival with the Loque Urbaine collective in Port-au-Prince. Do you feel it is important to support Haitian artists in this way?

Throughout my career, I have often felt as though there were lots of things I needed and that didn’t exist in my country. So I instantly wanted to create a space there to provide support to emerging artists. In Haiti, we have a very strong relationship with poetry and many young people dream of becoming writers. So I asked myself what kind of space could crystallise this energy. As an artist, I see myself first and foremost as a citizen who lives in an environment and wants to help build his community. There was no international festival dedicated to poetry, so I decided to set one up in order to guide all these young people and, that way, give them a boost. I also think that it’s important to implement structures and spaces for recognition in my country, as the world needs to take notice of us, too. It’s a way to challenge the fact that we are always on the fringes. More than the idea of just creating a poetry festival, I thought it was relevant to create a poetry festival in Haiti.

You won the RFI Théâtre 2021 Prize for the play “Opéra poussière” (“Opera Dust”), in which you explore the anti-colonial resistance through the Haitian heroine Sanite Bélair. Can you tell us about this piece and how the project came about?

In Haiti, we are very familiar with the name Sanite Bélair, but we know very little about her story as it is not taught at school. She was a young woman who, at a very young age, joined the anti-colonial fight towards the end of the 18th century and was at the forefront of the Haitian revolutionary army. When she was captured in 1802, she refused to be beheaded, as was the punishment for women, and was eventually shot, which was the fate reserved for men. I thought that it was a strong political statement to demand to be treated like a human being, and not just a woman, even in death. I reflected on the role of this woman martyr in the collective memory of today, and thought that she was quite under-represented. I didn’t want to create a biography, but instead draw inspiration from her story and her life, linking it to our times. In the play, she comes back from beyond the grave to haunt us on social media: this is her odyssey in order to reclaim her place in history. 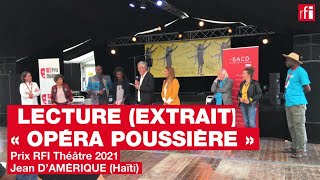 You run regular writing workshops and give your writing a voice on stage. How do you view this blend of the written and the spoken, words and speech?

Having grown up in a context of orality that precedes even writing, I think that the written word fuels the spoken word, and vice versa. During my childhood, games were often filled with songs, words, rhythm. With our voice, it’s as if we are giving words a new suit of armour, a new and more corporeal power. I wouldn’t say that I only write in order to be read aloud, but I think that performance always brings a different dimension. When I write, I imagine the voice that will accompany the text and this helps me to find a kind of inner music in the words, a way of composing sentences, which chimes with this music. In plays and novels alike, the characters I construct have to be able to meander in the public space or stand in an agora, lips ablaze with verbs. I imagine them proclaiming words, making a final, urgent speech, which requires a voice.

At the heart of a chaotic world where things are constantly changing in an often anxiety-inducing atmosphere, where does your current inspiration come from? What form do your upcoming creations take in your mind?

I don’t like the idea of inspiration, because I feel that writing is part of the movement of my life. I live, I do a lot of things and, at the heart of all that, there is the act of writing, which happens in the moment. I don’t try to write about a specific subject, I experience it more like something that just comes out of me, something that runs through me.

For the moment, in terms of upcoming creations, nothing is set in stone. I have a lot of activities and events linked to my previous pieces that are keeping me busy. But I’ve always got things in the works. I often take notes in fragments, they don’t yet have any precise form. I’m supposed to do a few writing residencies next year, so I hope I’ll be able to dedicate myself to these projects in a more relaxed way.

As a partner of the 2021 RFI Theatre Prize, the Institut français will support Jean d'Amérique in several writing residencies in 2022.

Jean d'Amérique also benefited from the support of "Des mots à la scène" (“From Words to the Stage”), which is a support fund for the production of contemporary writing for the stage from Africa and the Caribbean launched by the Institut français and funded by the Ministry of Culture.