Beyond the encounter itself, I am interested in otherness

Born in 1987, the artist Justine Emard began using augmented reality and artificial intelligence early to create videos, installations and performances. With her work currently exhibited in France, the Netherlands, South Korea, Japan and New Zealand, she discusses her interest in technology, the issues it raises and her upcoming projects.

What was your training, both artistic and technological ?

I always wanted to be an artist. I was interested in the image, its reproduction and its mechanisms, and I studied at the Beaux-Arts. I began by working on the fixed image and the image in movement – right up to its immateriality –, which led me to image-based technologies and everything that falls under simulated reality. It was during various residencies that I really discovered the world of computing, particularly in 2010, where I took part in an experimental residency in a virtual reality centre. There, I learned how to code, which gave me a better grasp of this world as well as a critical perspective. It was a total immersion in the world of computing and new technologies. That’s where I discovered the full scope of ways to simulate reality.

Can you tell us about Screencatcher (2011), your first piece in augmented reality ?

The title is a reference to the dreamcatchers of the Navajo Native American people. For me, the piece was a way to approach a digital dreamworld, born out of the idea of inserting an image into a landscape, which was inspired by the open-air cinemas you find in the United States. I wanted to activate these screens, which are like imaginary worlds you enter into. I was also influenced by the concept of heterotopia that so preoccupied Michel Foucault – concrete spaces that harbour an imaginary world. Augmented reality allows me to bring the real and the virtual into a dialogue within the artwork space. The screen comes to life before our eyes. We are brought inside the image through the projection.

Drawing and photography are not always involved in the final piece, but are sometimes the first steps in your work...

For me, drawing and photos are a way of entering into a dialogue, of accessing certain worlds. The image helps me understand what I want to tackle and can culminate in research projects – such as Erika, a film I made in 2016 which wasn’t initially intended to be shown, although I eventually agreed for it to be screened at LE BAL in Paris for a film series linked to the exhibition En suspens in 2018, having been won over by the team. My work features both productions that help me move forward and works that I will actually show.

What’s so lovely is the way the work is formed in a moment, an instant – I’m interested in this notion of time.

You also work with different professions in the world of performance, such as musicians (Parade for the End of the World in 2016, Heavy Requiem in 2019) or choreographers (Dance Me Deep en 2020). What role does performance have in your approach ?

Performance has allowed me to tackle the image on stage and work with the live show. What’s so lovely is the way the work is formed in a moment, an instant – I’m interested in this notion of time. In 2016, the performance Parade for the End of the World, produced with Keiichiro Shibuya and Jérémie Bélingard, was a way to explore the concept of total art through a reinterpretation of the ballet Parade, for which Pablo Picasso made the stage curtain. I wanted to address the image in terms of its temporality and put my practice on stage, allowing it to evolve before the spectator’s eyes. For Dance Me Deep (2020), a robotic arm prints the dreams of the performer. This poses a lot of questions: how can you stage a technology in the performance? How can you show and enable this process in front of the spectators? It’s another way of working, in a given space/time, and of exploring the notion of the “present”.

Encounters – and their element of the unexpected – are at the heart of your work, particularly the video piece Co(AI)xistence (2017) presented at the FRAC Franche-Comté. What inspired you for the idea of an encounter between a robot and a human being ?

Beyond the encounter itself, I am interested in otherness above all. What I like about the idea is that is applied in several ways: an individual, an intelligence, a thing, a stone, a fragment – anything outside of the self. When I started to take an interest in AI, I was fascinated by the idea of autonomy and autonomous systems. In 2009, for example, I worked with automatic text and philosophy generators. I realised that the body was rarely covered as a subject, so I wanted to work with this concept of embodiment and dialogue with the other. I conducted this scientific experiment by orchestrating an encounter between the dancer Mirai Moriyama and Alter, a robot governed by an autonomous system that generates movements in real time. It’s fascinating to see what these two entities can learn from one another. It’s about exchange, dialogue, through the verb and the body. It was also an experiment for scientists. In fact, my works are sometimes presented at scientific conferences.

What are your upcoming projects linked to artificial intelligence ?

I am developing a project based on the vision of machines, the origin of images and our perception of the world. I have worked from recordings of surroundings, using 3D scanners that can send data in real time. These three-dimensional images immerse us in another space, as if we were ghosts able to move around. I have always explored the medium in this way, creating an almost custom-made medium to develop a work. 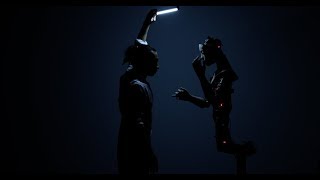 The work of Justine Emard will be presented during Novembre Numérique (Digital November) 2020, the month of digital cultures managed by the Institut français.

Find out more about Novembre Numérique.