The internet was outdated, it was time to produce, innovate, create and above all make use of space.

Postponed due to the pandemic, the third NewImages Festival will be held in situ at the Forum des images and inside the Forum des Halles, as well as online, from 23 to 27 September 2020. The programme includes a selection of the best French and international virtual or augmented reality experiences. We talk to Michaël Swierczynski, the festival’s director.

You are Executive Director of Digital Development at the Forum des images in Paris and director of NewImages, a festival dedicated to virtual reality and digital creation. How did you first become interested in the digital world and immersive realities?

More than the digital or the virtual, what matters most to me is unearthing new content at the right time, in line with current and especially future uses. It’s all a question of time, of being ahead of your time.

I had the opportunity of managing the digital department at the INA. At the impetus of its president, the ina.fr website for the general public was launched to showcase French audiovisual heritage. That was in 2005-2006, we were pioneers of this type of audiovisual platform and it was an almost immediate success. I then left the media in 2013 for the Forum des images (formerly the Vidéothèque de Paris), a physical space, which was totally new to me in my relationship with the public. The site redesign or launches of VOD services were already outdated: it was time to produce, innovate, create and above all make use of space through new encounters, such as festivals dedicated to the digital sphere in the physical world. Immersive reality was a clear choice as a new form of story-telling driven by a new media. As such, we created Paris Virtual Film Festival (PVFF), the first festival dedicated to VR, now called NewImages Festival.

Most of the top film festivals have been using VR for several years now. We are also seeing the growth of a host of festivals specially dedicated to immersive realities. How does NewImages Festival position itself?

I think that what makes us unique is our image as a head hunter for new forms of narration and new talents around the world. All that matters is new forms of writing, the future of story-telling; VR comes second. Unlike other festivals, we are not a technology trade show, but a festival dedicated to digital creation. In 2019 we launched an international coproduction market (XR Financing Market). We also produce our own projects. Finally, the last strong point of NewImages Festival is that it is accessible to all, with a view to democratising new uses. We provide the French and international public with installations that, because of their cost, are generally inaccessible. We get a lot of foreign visitors, from Asia, Africa, North America and Australia. 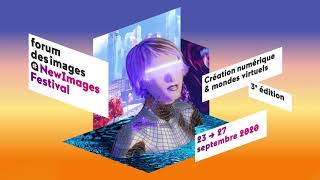 This initiative allows us to go looking for new cultures, forms of creation and narration; we discuss different points of view, we learn and above all we develop the terms for a potential coproduction. From the resident’s perspective, it is a very concrete project: it offers a French creator the unique opportunity to develop their VR project and receive the best support, working directly with the most well-known Taiwanese stakeholders in the sector – artists, developers, experts, producers, studios, etc. Throughout their three-month residency, the creator enjoys a grant of 30,000 euros, all their expenses are paid and, at the end, their project is presented at the Kaohsiung Film Festival and NewImages Festival. The aim is to initiate new synergies between French and international talents.

Have you developed other partnerships abroad?

Along with the Tshimologong Digital Innovation Precinct incubator in Johannesburg and the Digital Lab Africa, the festival has launched an arts residency to support XR creators. Like in the United States and Canada, we want to work with Asia, Africa and South America to create a new dynamic and bring out new talents. As an example, as part of the festival’s focus on Africa, we (in partnership with the INA and TV5MONDE) paid tribute to Nelson Mandela and his fight against Apartheid on the centenary of his death. Using a hologram and 3D animations, sound archives of his defence speech and the speeches of the prosecutor Percy Yutar were presented inside the Saint-Eustache church in Paris.

The first one that comes to mind is Bodyless (2020), by the Taiwanese filmmaker and artist Hsin-Chien Huang. The images come from his memories from the 1970s of martial law in Taiwan, which lasted from 1949 to 1987. We follow the ghost of a political prisoner and explore his surroundings using the controls. I would also highly recommend you see the French coproductions Gloomy Eyes (2020) and Battlescare (2018); a little less recent but still amazing is The Enemy (2017), a VR experience through which you can meet fighters; the stunning VR tale The Fisherman’s Tale (2018); the powerful story and testimony of Walter Sisulu (2019). All these pieces are or have been presented at NewImages Festival. It is difficult for me to talk about new pieces being presented this year, because I don’t want to influence anyone. I should mention, though, that we are launching the first prize dedicated to augmented reality.

As part of the COVID-19 crisis, NewImages Festival is taking the form of a hybrid event, both physical and online. How will this dual approach work?

Visitors, whether private or professional, will be able to come to the festival, where all health and safety measures will be followed, or they can experience the pieces at home – although you’ll need headphones – and watch live or pre-recorded lectures, some of which will have been held by Zoom or Skype to allow international participants to take part. We are also going to try out hybrid shows, such as concerts or live performances. This next festival will therefore be digital, virtual and physical!

Institut français and the event
Image

The Institut français assists French players in virtual reality in developing internationally, by reinforcing their visibility thanks to a bilingual showcase-website Culturevr.fr and by promoting the distribution of their works through the French cultural network abroad (La Sélection VR) and international markets (French Immersion programme, VR Immersive Experiences catalogue). It fosters international coproductions and cooperations and puts French and foreign professionals in contact with each other (in particular with the framework of the Focus). Lastly it supports designers within the framework of the residency programmes (VR writing residency, Villa Kujoyama, Villa San Francisco, etc.)