What is real today is much more terrifying than the most daring fiction. I have the impression that my film has become, in spite of itself, an archive of the country under threat of disappearing.

Nora Martirosyan’s first feature film, Should the Wind Drop (2020), sadly echoes reality. The director filmed the territory of Nagorno-Karabakh, which has been under a ceasefire since 1994 but which today is at the heart of a bloody conflict. Overview of the production of her film, selected by La Fabrique Cinéma de l’Institut français in 2013, and her mission as film-maker. Should the Wind Drop is released in French cinemas Wednesday 26th May.

You are Armenian. What place does film have in this country and how did you encounter film?

I was born and grew up in Soviet Armenia, and we mainly had access to Soviet films. There wasn't much available but I was struck and influenced by great directors like Artavazd Pelechian, who made essay films, or Sergueï Paradjanov, with fantasy fictions.

My parents were scientists, I was surrounded by very curious people who were highly interested in culture. This little community had a film club that allowed us to watch films that we couldn't see at the cinema. I remember in particular having discovered The Discreet Charm of the Bourgeoisie (1972) by Luis Buñuel; I had the impression that he spoke to me personally. I had the feeling that the adults around me didn't understand this film, unlike me, who was just a child. I felt like I belonged to this world. Following that, I wanted to go and study film in Moscow but political events didn't allow me to and I stayed in Erevan to study at the Fine Arts Academy.

Before film, there was painting, your first profession. How did the 3rd art influence your work?

I studied painting and contemporary art, telling myself that film was out of my reach. When you’re a painter, you have to learn how to look at the world. For me, film is a continuity of this observation, which joins writing, the story, sound, and movement. Technically, painting helped me feel more comfortable regarding questions related to framing and colours.

Your first feature-length film, Should the Wind Drop (2020), is inspired by your first journey to Nagorno-Karabakh in 2009. How did you understand that you had found the subject of your film?

I went to Nagorno-Karabakh for first time out of curiosity. I wondered what this area was like, which I’d heard so much about during the war, between 1991 and 1994. What I saw before me was a country that was definitely there, with fields, roads, village signs and towns, but when I looked at the map of the world, these places didn't exist legally. This incoherence really struck me. I understood that I wanted to tell a story, but I spent a long time finding the suitable story. After I’d been there twice, I found the airport of Stepanakert, the capital of Nagorno-Karabakh, which had been in working order for years, but from which no planes took off or landed for political reasons. I quickly understood that it was from this airport that I could present the challenges this town faces.

You wanted to film this area and the airport but also its residents. How did you form the cast?

It’s a polyphonic film, with plenty of characters and stories. I used actors, like Grégoire Colin, but also amateurs who more or less played their own role, even if each of them is reciting lines. I spent years going back and forth with a camera and sound recorder. I got to know Nagorno-Karabakh. I went to the towns, the villages, and met lots of people who always welcomed me. For the film, I wanted to recreate their words and their hopes.

I think that any artistic gesture is a political gesture because the artist makes public and brings into existence what doesn't need to exist.

How did you develop your film project, selected at La Fabrique Cinéma de l’Institut français in 2013?

La Fabrique Cinéma was a real opportunity to help me target my objective, establish strategies, work out what I expected and meet people. La Fabrique Cinéma boosted the film’s development and led to meetings at the Cinéfondation, the Jerusalem International Film Lab or the Festival International du Film d’Amiens (FIFAM) where the film received the screenplay prize. I didn't come from the film industry and I didn't know how to make a film and yet, it was part of the Official Selection at Cannes 2020 and the ACID 2020 Selection (the association of independent film for its distribution). It’s magic, and it’s good news for the country because Should the Wind Drop (2020) is the first Armenian film that’s been in the Official Selection of the Cannes Film Festival since 1965.

The film sadly echoes the reality of today. How are you feeling just before your film is set to be released in cinemas?

More than anything it’s a film of hope and peace. I depicted Nagorno-Karabakh before the war blew up and before the military aggression tried to wipe out all that peace had tried to build in 30 years, since the ceasefire was signed in 1994. In looking at recent news I am extremely troubled because I have the impression that my film has become, in spite of itself, an archive of the country under threat of disappearing. I hope that the audience that sees this film will wonder why we have closed our eyes on this conflict and why no one is doing anything. What is real today is much more terrifying than the most daring fiction. Everything that exists in this film, from the population to the landscapes, is now under threat of destruction.

You said that “it’s a great responsibility to make fiction.” As a film-maker, do you feel invested in a mission?

Creating fiction, is telling something that stems from reality but without just saying anything. I think that any artistic gesture is a political gesture because the artist makes public and brings into existence what doesn't need to exist. Each of the artist’s acts is an assumption of responsibility.

Are you working on other projects?

During the lockdown, I started writing a new project with the novelist Emmanuelle Pagano, my co-scriptwriter on Should the Wind Drop, who I met at the Villa Médicis, but with the events happening in Nagorno-Karabakh, I have to find the desire to continue. I’m only at the writing phase. 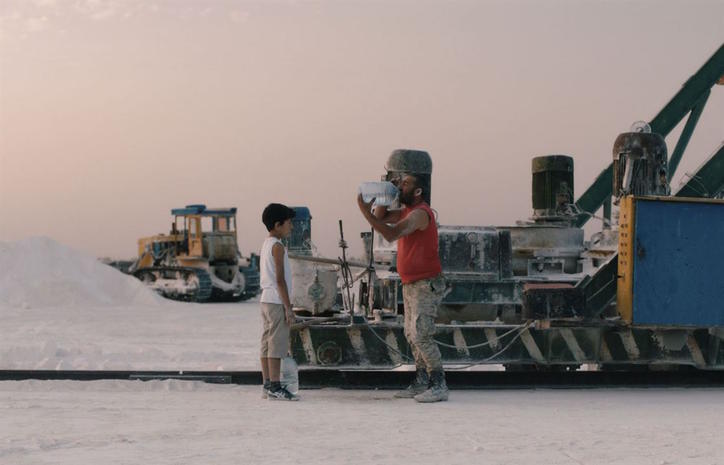 Should the Wind Drop (2020) benefited from the support of La Fabrique Cinema in 2013. This programme promotes the emergence of young creation from Southern countries on the international market.