Today in Romania, hope has fallen back a little but I think there is a form of optimism that persists and which is manifested by a capacity to laugh at one's own misfortunes.

Following Symphonie Carcérale, a comic strip that plunged us into the daily life of Fresnes prison, the author Romain Dutter and the cartoonist Bouqé have produced Goodbye Ceausescu, a journey into today's Romania.

Could you tell us about your respective careers? How did you meet?

Romain Dutter : I studied cultural mediation and international cooperation, and I also worked a lot in Latin America, notably as a volunteer in a prison in Honduras in 2003. When I returned to France, I became a cultural coordinator at Fresnes prison. After ten years spent "on the right side of the bars", in 2018, I wanted to tell this story and show another reality about this environment full of clichés. The form of a comic strip appealed to me because I wanted to make this story accessible to as many people as possible. So I started looking for a cartoonist, asking around my friends. A few months later, Julien's brother put us in touch. His drawing style seemed perfect for this project.

Bouqé: As for me, I have always been involved in the world of images and illustrations, which led me to the world of publishing. Today, I am an art director at Bayard. After having worked a lot on commissions, not always very interesting, I was looking forward to a more personal project like Symphonie Carcérale, which we published through Steinkis in 2018.

How did you prepare the script for Goodbye Ceausescu? Was the project of a comic book already in the cards when you decided to travel to Romania?

Romain: With Symphonie Carcérale, I really got into writing for comics. While Julien was finishing his drawings, I was already thinking about developing another project. I had travelled to Romania in 2015: I have always been fascinated by the history of Eastern Europe, especially after the end of communism. The trial and execution of Ceausescu were the first images that made an impression on me, on television, when I was nine years old. I then came across an article announcing the thirtieth anniversary of the Romanian revolution: following on from Symphonie Carcérale, I wanted to explore this country, which is somewhat unknown and a victim of clichés. In France, there is little interest in Romania, and people often have a negative image of it. But when no one is interested in something, my interest is piqued. I also wanted to offer something very different to Julien. This comic strip allowed us to go on an "adventure" together, visiting Romania several times, thanks in particular to a writing residency that was granted to me by the Institut français. 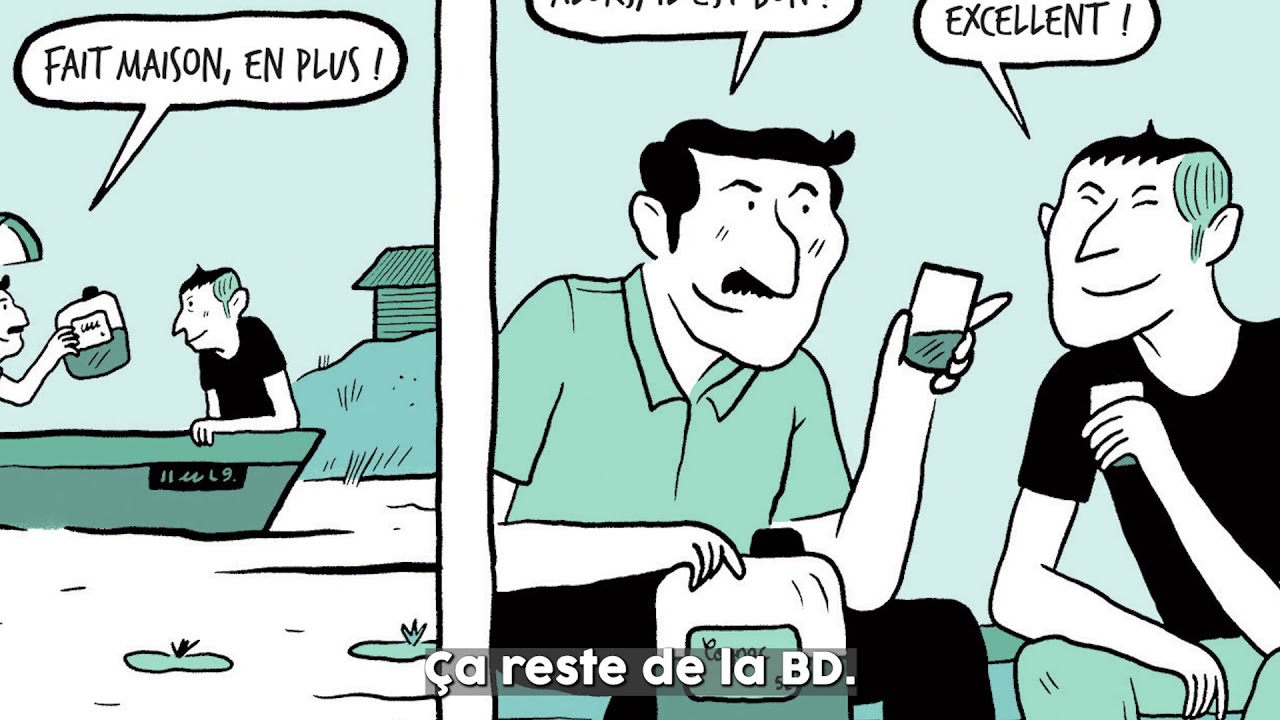 How does your collaboration work in practice?

Romain: Fortunately, it works very well. We know each other outside of work and we've taken the time to develop a friendship, which is important when we embark on a long-term project together. The process of back and forth between the author and the draughtsman allows us to put our egos to one side and to rework the story continually. For my part, I am primarily in charge of the writing of course, but also all the research and documentation, and I submit the script to Julien so that he can tell me what he thinks of it.

Bouqé: After the initial writing phase, we work on a second version of the script which I start to put into images with some sketches. In the meantime, Romain has provided me with a lot of documentation, which allows me to get to the point. After the storyboarding stage, we re-read everything with our editor, and add the finishing touches. I then move on to the inking phase. For Goodbye Ceausescu, we also used a colourist (Paul Bona) to meet the deadline. Throughout this process, we stay in touch on a daily basis.

What surprised you the most during your stay in Romania? What did you learn from this trip?

Romain: What struck me most was the lucidity of the Romanians about their own situation and their desire to invest themselves in their country, despite the fact that the situation remains difficult thirty years after the fall of communism. Today, hope has fallen back a little but I think there is a form of optimism that persists and which is manifested by a capacity to laugh at one's own misfortunes. As for the question of post-communism and neo-liberalism, the trip convinced me that there is no ideal system. Even though life was extremely hard under Ceausescu, thirty years later the situation is still difficult. Despite the freedom to consume and travel, the social fabric has deteriorated, with phenomena such as racism and corruption developing.

Bouqé: In any case, many doors were opened to us and the welcome was very warm. What struck me was also the astonishment of the Romanians that we could show interest in their country. Some people thought we were joking, because they couldn't imagine that we were writing a graphic novel about their country.

Romain Dutter, you are now working on a new project about Latin America. Can you tell us about it?

Romain: I'm passionate about travel, especially Latin America, where I've already travelled a lot. It's something that has been important in making me what I am today. I would like to speak a little of this, this love story for this continent and these people. In this new comic book project, I would also like to integrate photography, and make it a more hybrid object, like a kind of travel book. For this, I benefited from an author's residency in the Ile-de-France region, which allowed me to work for nine months in Seine-Saint-Denis, offering workshops to raise public awareness of Latin America.

What are your respective plans in the coming months?

Romain: I am going to take up a residency in Barcelonnette, in Alpes de Haute-Provence. It's a very special town, which has had a shared history with Mexico dating back almost a hundred and fifty years. This will allow me to continue the workshops and to finish, I hope, writing the script. I have also just finished writing an adaptation of the novel Le Jour d'Avant, by Sorj Chalandon, which deals with the Liévin mining disaster in 1974. It will be published by Steinkis in 2023, with the illustrator Simon Géliot.

Bouqé: I also have a new comic book project with an author who spent several months doing research in a police station in Roubaix.

Goodbye Ceausescu (Steinkis, 2021)
The Institut français and the project
Image

Winner of an Institut français Stendhal Residency, Romain Dutter and Bouqé were in Romania in 2019 to prepare Goodbye Ceausescu.