In theatre, I want to laugh until I cry and dance on violence

After TBM – Tunnel Boring Machine (2017) and The Jewish Hour (2020), Israeli author and director Yuval Rozman has been writing Adesh, the final part of a triptych called Trilogie de ma terre. This collection is dark, intimate, and unusual, probing the depths of the Jewish soul through the turmoil caused by the Israel-Palestine conflict.

How was your theatrical practice moulded?

In secondary school, I admired Chekhov, Shakespeare, and Byron, authors who embodied an ideal vision of theatre. Maybe I’d make this kind of play some day, but there was a tipping point in my personal history. I did my mandatory military service in Rafah, in the southern Gaza Strip, where I acted as a liaison officer between NGOs and the Israeli army. In this position, I was in contact with the Palestinian population and I had the rather naive idea of creating a theatre company with them. It was a failure. I opposed my chain of command then I deserted, but I understood at that moment that my work had to be made out of these subjects of life, suffering, and occupation.

Among your touchstones are Patrice Chéreau, Krystian Lupa, and Romeo Castellucci. How do they inspire you?

These are artists who bare their soul on stage. There’s something in them tied to instinct and authenticity which fascinates me. They don’t play modern society’s game, where discourse takes precedence over everything else. I find this sincerity touching and I try to measure up to it. There is a great deal of observation in my work. I fill notebooks searching for a vibration beneath the text, behind situations. When I feel it, that’s the time to share with the public.

About the play The Jewish Hour, you wrote: “my whole life, I’ve tried not to be Jewish”. What makes this question of Jewish identity so complex?

This thinking is actually due to the fact that I discovered my Jewishness in France. You should know that I grew up in a rather religious family, with the rituals of synagogue and prayer every Saturday. As a teenager, I rebelled against the idea that this defined me. I was Israeli and a citizen of the world, full stop. But by exiling myself in France, I was straight away confronted with the gaze of others and with this link between my belonging to Israel and Jewish identity. I even lived beside a synagogue in Paris and I surprised myself by feeling close to this almost exotic community. There was something compelling in this confrontation between two conflicting emotions that I couldn’t escape and that demanded further questioning.

Did this exile in France also change your theatre writing?

No, my practice hasn’t changed, but being in France has certainly nurtured me and given me new roots. Originally, I didn’t consciously desire this exile. If I fled my country, it was because Israel drove me crazy. The occupation of the Palestinian territories is like a disease that gets under the skin and contaminates the life of every Israeli citizen, how they talk, how they move, how they do their shopping. There was also a lack of dialogue between artists in my professional life. However, I did find this taste for creative sharing in France. When I was working on the question of utopia with Lætitia Dosch on her play Hate, for example, my way of looking at the world changed. These interactions helped me to dive deep inside myself, to shake off the dust of everyday life, and to connect with my core.

As a viewer, as soon as I see what the author is trying to achieve, their project loses interest for me. I need to be led to a place where I have to do the work.

The Jewish Hour plays two cards at once: farce and cruel fable. How do you articulate these two dimensions?

In theatre, I’m always looking for a way to combine comedy and tragedy, to laugh until I cry, to dance on violence. As a viewer, as soon as I see what the author is trying to achieve, their project loses interest for me. I need to be led to a place where I have to do the work. As such, I wanted The Jewish Hour to be a play that resists being pigeon-holed. There was the question of anti-Semitism in France, but I wanted to avoid the viewer interpreting the text in only one way. The Jewish Hour is essentially based on an internal conflict: love for Israel, its landscapes, and my family, and the hate I sometimes feel for that place. These two energies twist painfully inside me and are translated into the complexity of responses provided by the play.

Why did you choose the form of a fake radio show?

I didn’t speak a word of French when I arrived in France. Since I love politics and artists, I listened to the radio a lot to learn the language. This universe became very present in my life and I wanted to recreate an amateur version, a real botched version, of the morning shows. This allowed me to blend two energies: utopia and destruction. The utopia belongs to Israel but also to the journalist who wants to live up to the potential of the shows she admires. Her dream crashes before our eyes, she’s subject to an extraordinary amount of violence, like the State of Israel, but she remains this battered woman character until the end. The question I’m asking is: when do we say “stop”? This brings me back to my own dream. I thought I’d be able to break free in France but it’s not possible, no more so that it was in Israel. So you have to learn to live with your disease.

You’re currently writing Adesh, the last instalment of Trilogie de ma terre. You travelled to the West Bank and Jerusalem as part of a tailor-made residency with the Institut Français. What did you discover during this time?

Lots of things but a very surprising one first of all: the health situation allowed me to be tuned in. Since I couldn’t talk for long while wearing a mask, I let the people to whom I was speaking express themselves and it shook up my vision of Israeli settlers. I grew up with the idea that they were the Diable sur les collines (Devil in the hills), the only obstacles to the peace process. My project involved spending a week in different settlements with my little dog to try and break the ice. The personal stories that I gathered called all my values into question. To a certain extent, the settlers themselves are also victims of the political situation. Here, as elsewhere, they aren’t bad people. I’m once again faced with a very complex subject which will lead me to radical choices like, for example, not using humans to tell this story. In any case, I’m certain that the viewer will have to feel the immense empathy that moved through me.

Click to discover The Jewish Hour by Yuval Roman 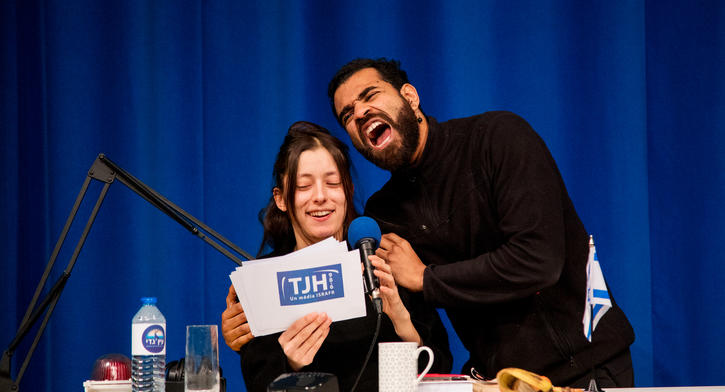 Having been chosen for a Residence Sur Mesure, Yuval Rozman stayed in Jérusalem and Palestinian Territories to work on Adesh, the third instalment of the Trilogie de ma terre.

Find out more about the Résidences Sur Mesure programme

Image
Close up
Choreographer Catalina Insignares in residence in Colombia