Spreading the vision of a VR creator

Since its creation in 2016, Diversion Cinema has explored the world of reality in its entirety and is constantly reinventing itself to show unique and immersive works. Meet Camille Lopato, its founder, and Paul Bouchard, who runs its distribution department, created in 2018.

How did you come to broadcast virtual reality?

Camille Lopato: I worked in film distribution for eight years and then I wanted to start my own entrepreneurial adventure, Pickup Films, a VOD service that was unusual for not being a platform. During a professional lunch I met Antoine Cayrol who was at the time at Okio Studio developing the 360° film I, Philip. He showed us a horror movie that seemed pretty simple. But when we tested it, we got the celebrated “wow effect”, which made us want to create Diversion Cinéma so that we could share it. After our experience in VOD, we wanted to work with physical media and became distributors of VR films. We opened a VR mini-cinema in the basement of a café in the XIth arrondissement of Paris in February 2016, a first!

Paul Bouchard: I worked for several years in international sales and distribution of films at Wide. It was at the Annecy International Animated Film Festival that I first met virtual reality film producers while I was prospecting for animated film. I saw I, Philip and Notes on Blindness, which were a real revelation! Back in Paris, I shared this discovery and we created a VR department. I later met the Diversion Cinema team and joined them in 2018.

What are the major challenges VR distribution is faced with?

Paul: The main challenge is the lack of standardisation of the VR market - in France and elsewhere. The distribution channels are multiple and different from one work to another. Each work must therefore be manipulated with its own logic. However, VR 360° works find their market more easily via online platforms or in VR cinemas. But as soon as it’s about an original artistic system, it is up to us to be creative and innovative in terms of distribution. For example, for the EVE experience, which combines dance and virtual reality, we adapt to the places where it is programmed. We present the work in its entirety to all those involved, from the technical system to the artistic intentions.

Camille: We would like to see a distribution model, but this is not yet possible. And then, is it really desirable for us and especially for the designers? What's more, the challenge for VR is also about its performance. We need to make clear what it's like to show and monetise VR, and develop its commercialisation.

The VR distribution channels are multiple and different from one work to another. Each work must therefore be manipulated with its own logic.

What is your approach at Diversion Cinéma?

Camille: Make sure that an immersive work is seen as widely as possible, and under the best conditions! That is the task we have set ourselves.

Paul: I would add: to be in the vision of a creator who will take us either into a narrative or into a sensory experience. We like to work with immersive works that make full use of the potential of new technologies to develop an author’s point of view.

How do you select the works you distribute?

Paul: In addition to its artistic and qualitative dimension, we also look at the relevance and commercial potential of a work. This does not mean that we are looking for “mainstream” works. We can select very unique works but they must be consistent from a commercial point of view, i.e. in terms of systems and the market. I am thinking of the work carried out for Peach Garden. We are sensitive to Hayoun Kwon’s work as an artist and it has several strengths that we were looking for: freedom of movement (using Oculus Quest technology), intuitive viewer immersion, ease of deployment etc. This work represents a good balance between artistic and commercial reality.

VR is now broadcast more in public places than in homes. Is this the path that VR should take?

Paul: For me, there's VR made to be watched at home and VR to be seen in physical places. Others are in between the two. Some of the works have left their mark on the VR world but will never really live outside physical spaces, such as DV Group's Alice or Tupac Martir's Cosmos Within Us. Others demonstrate that it is possible to exist both online and in a physical format – for example, Eliza McNitt’s Spheres. Some VR apps and experiences are specifically designed for home entertainment and don't necessarily need to exist outside stores. 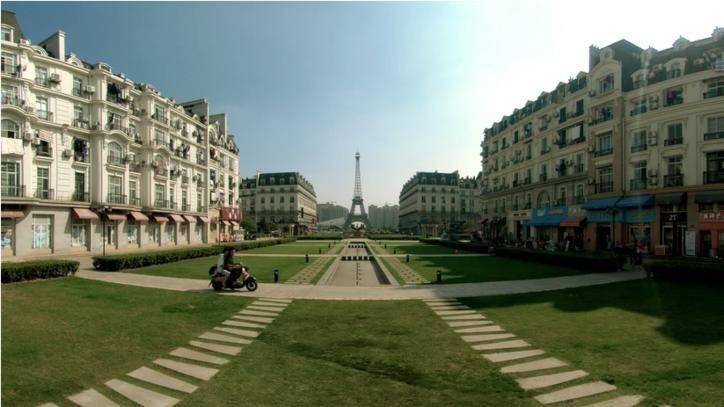 © DR
The Real Thing, by Benoit Felici and Mathias Chelebourg, is distributed by Diversion Cinéma.

Which VR installations do you see as most promising?

Paul: Peach Garden, which we are currently working on with Innerspace, uses the potential of stand-alone headsets to offer free-riding experiences in very large areas. This will allow headsets to be used and multiple people to travel at the same time. This is an entirely new format that promises freedom and simplicity. Another example is EVE, which has the specific quality of including choreography performed by live dancers.

Camille: We need to ask ourselves what a promising installation is... Are we talking about markets or creation? We focus on the creative aspects and artists who have things to say with this medium. That is what is promising for us.

You have been based at Centquatre in Paris since 2019. What does this place bring you?

Camille: Having access to exhibitions, incubators and discussions with other creators inspires enthusiasm and creativity. We also did some VR training for the Centquatre team. And we hope one day to be able to present one of our works in their homes!

Paul: Our next project, Dreaming Zone – a poetic experiment that takes place during the conflict between North and South Korea – is in the making and will be ready by the end of 2020. We are also working on immersive and perhaps “off-mask” projects, i.e. immersive works with strong intentions but without VR headsets. Why not open up more to immersive and other forms of technology?

Diversion Cinema is presented on culturevr.fr, an Institut français platform which offers a panoramic view of cultural innovation in virtual reality.

Read more about Diversion Cinema on Culturevr.fr, and also on The Real Thing / Archi-Vrai

Image
Close up
Digital arts: the Institut français signs a multi-year agreement with the HACNUM network

Image
Close up
A family discovery of French digital creation with IFdigital!