I’m lucky enough to have a multifaceted job, and to experiment with budding technologies. I’m having a great time, it’s a kid’s dream!

A filmmaker and artistic director, Gordon has created a host of cultural programmes in virtual reality (VR) and augmented reality (AR). He designed 1, 2, 3 Bruegel, a virtual reality game based on the work of the Flemish master, Replay Memories, an immersive creation that explores our relationship with history and, this year, When she gets out co-produced by the Musée d’Orsay.

You began your career in television graphics. How did you get into filmmaking ?

After studying at the Estienne school, where I studied page setting and typography, I worked in television graphics. It’s a very particular and restrictive world where efficiency is king. I learned about rigorous editing and had the opportunity to train in filmmaking through shoots in studios or outside. After fifteen years, though, I felt I had done it all, and I felt drawn to the world of culture and music.

You have made many films in which music (and classical music in particular) plays a central role. Where does this particular inclination come from ?

I’m a music lover, it has always been part of my life. So working in the musical realm was a dream of mine. Television graphic design also involves working on sound design, so it was quite a natural transition for me. It was also the result of chance encounters and friendships. Jean-Stéphane Michaux, from Camera Lucida, was my neighbour and we have worked together for almost 20 years. Along with François Morel and the National Orchestra of France, I made Pierre et le Loup (Peter and the Wolf) for France Télévisions. It was a perfect marriage of my worlds, one where the book comes to life and typography changes into characters.

How did your partnership with Andrès Jarach and the studio Lucid Realities come about, with projects such as Replay Memories and 1,2,3 Bruegel ?

We were introduced by Chloé Jarry, the founder and producer of Lucid Realities. She wanted to come up with a VR experience that explores our collective memory in the era of algorithms. Andrès and I really complement one another and are now very much a unit: as Gilles Deleuze said, “having an idea is a kind of party”, and when we are together, it very often is a party.

In Replay Memories, which uses VR, you explore collective memory in the time of the web and algorithms. How did this project come about? How is such an ambitious project carried out ?

It was a very ambitious project, both from an editorial and technical perspective. We wanted to explore the place of algorithms in our lives, how they are designed and orientated. Replay Memories was focused on 11 September 2001, an event that occurred when the internet had only been around for ten years. How is history constructed when we externalise our memory onto different connected devices to such an extent? And how does our personal memory evolve over time, with the internet playing a funnel-like role. It’s a fascinating problem. The experience is currently being presented at the BNF until 14 December 2021.

1,2,3 Bruegel is based on the painting Children’s Games by Pieter Bruegel the Elder. Can you tell us how you had the idea ?

This project was made for the Arte Trips collection, still in partnership with Lucid Realities. The painting depicts nearly two hundred children playing without any adults present. The user puts on the headset and can play hide-and-seek with them: you count to three and... poof! They have all disappeared. However, one aspect that was very important to us was respecting the artwork: we absolutely did not want to animate the characters and recreate the setting. Through anamorphosis, we transformed the painting without altering the painter’s work in any way. The painting becomes a kind of template. 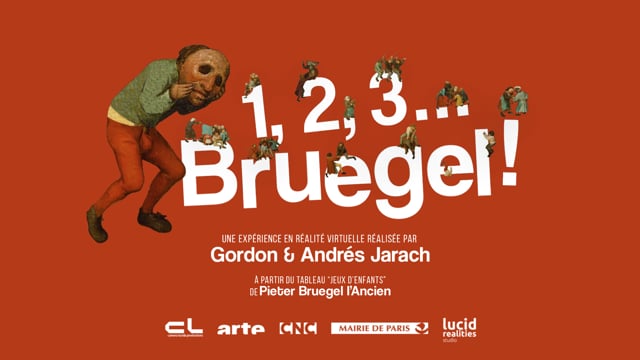 Your new project, released in October, When she gets out, is a collection of experiences in augmented reality inspired by Edgar Degas’ Little Dancer and masterpieces of painting. Can you tell us more ?

I created this piece, commissioned by the Musée d’Orsay, with Marie Sellier, with whom I had previously worked. We walked through the museum together with one limitation in mind: to ensure children are not wandering around the museum with a telephone. On the contrary, we wanted to use the power of dialogue, sound and music to tell a story. The experience lasts thirty minutes, it takes place at home, and consists of following the Little Dancer as she discovers works of varying levels of fame found throughout the museum. The children bring the Little Dancer into their home through a little museum in virtual reality. The app will be released in autumn 2021 and can be downloaded for free on app stores.

Do you think that new technologies such as virtual and augmented realities give us a new perspective on classical works, particularly for young audiences ?

Absolutely ! VR and AR make memories. By using technologies beloved by children and young people, we introduce them to other worlds like opera, baroque music, literature and contemporary art.

You are also passionate about architecture and have just launched a brand new collection of works in virtual reality on the subject, still under development. Can you tell us about the first episode on Le Corbusier’s Villa Savoye, which you are currently working on?

Chloé Jarry, the project’s producer, and I are fascinated by Le Corbusier: as a child, she even lived in the house of the “fada” (Unité d’Habitation) in Marseille. The first episode of this collection, “La Villa Savoye”, perfectly encapsulates our desire to showcase architecture through the eyes of designers. We started with the Five Points of a New Architecture from Le Corbusier’s manifesto, which are perfectly represented in this villa: pilotis, free ground plan, free façade, horizontal windows and the roof garden. We also talk about the specifications set by the client, Madame Savoye, the wife of a wealthy insurance agent from Northern France who wanted a villa that was different from those of her friends and equipped with all modern comforts.

In what ways do you think virtual reality is useful for introducing people to great pieces of architecture?

I have been fascinated by work on the concept of scale since I was a child. VR allows us to go from concept to plan, model and site, before seeing the finished project in its entirety by modifying the scale and user's environment at each stage. It’s an extraordinary way to experience architectural concepts.

1,2,3 Bruegel,  by Gordon and Andrès Jarach, is part of Culture VR: la sélection, a varied offering that showcases the best of French creation in virtual reality intended for distribution within the facilities of the French cultural network abroad or its partners.

Image
Close up
Modest Mussorgsky's "Pictures at an Exhibition", a series of symphony concerts