I’m not aiming for representation and meaning, but rather sensation and intensity

As a visual artist who plays with interdisciplinarity, Pierre Coulibeuf creates cinematic works where narrative and experimental fiction meet. His next film, Rouge Carpaccio, a free adaptation of a script commissioned from Michel Butor, focuses on Carpaccio's painting and obsession in the city of Venice.

Your career has involved both visual arts and the cinema, while your education was in literature. Why and how did you move from words alone to a multidisciplinary practice?

Since my studies at university, I have developed a multidisciplinary approach through which I take an interest in literature, cinema and the visual arts. I threw myself into the work of writers and filmmakers such as Alain Robbe-Grillet, who has been a great inspiration of mine, and writers who worked closely with images, such as Pierre Klossowski, around whom I structured my first work Klossowski, painter and exorcist (“Klossowski, peintre-exorciste") (1988). This is how I began to create films: from the mental worlds which surround encounters between different artistic practices.

Their vision of the world allows me to explore new cinematographic worlds, to create works I could not have made without them. These artists’ works resonate with and in my own works: what I like is this ongoing dialogue between their primary references — their inspirations, their work — and my own culture, my interpretation, my “visions” – to use a term from Pierre Klossowski – more than what they express. In short, my approach can be defined as a project of transformation, the transition from one work – theirs – to another – mine — during which these artists become fictional characters, but without following a pre-existing script.

Although sometimes very different in form, your works always immerse us within creation itself, in all its intimacy. How do you create a narrative around this?

My works are not focused on representation: I build experimental fictions based on reality. I like going in search of something that hasn’t been given to me, taking artists and turning them into actors without asking them to perform for the camera. Cinema makes it possible to focus on individuals without extracting them from their medium of choice. In fact it is the setting, the relationship between these individuals and the camera, and the editing which transform them into characters in their own right.

What interests me is showing both the person being filmed, his or her impulsive core, and my perspective on the world through what this person expresses through his or her art. Unlike documentaries, which seek to portray an objective reality, I portray a subjectivity: the artist's and also that which I express through my formal creation, framing and editing choices... 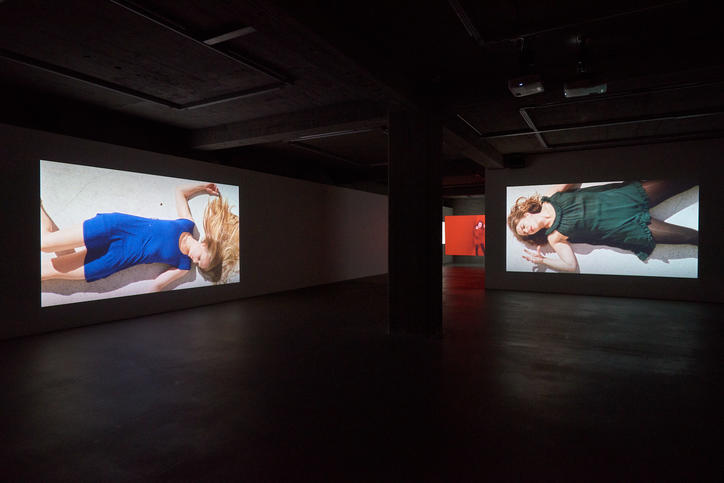 The contrast between reality and fiction, as a dichotomy, is alien to me. Reality is the product of many different individual points of view. Perspective and interpretation are what create the richness of reality.

I’m not aiming for representation and meaning, but rather sensation and intensity” This applies to both my filming and editing styles, to my choice to film on 35 mm, and also to presenting the works in the cinema and, in a restructured format, in exhibition spaces, as will again be the case for Rouge Carpaccio.

Rouge Carpaccio marks a new collaboration with the now-deceased novelist and poet Michel Butor. How did this project come about?

I had already made two films with Michel Butor: a short film in 1989, Entertainment at Balzac’s house (“Divertissement à la maison de Balzac"), in which he played himself, then, ten years later, the fictional portrait Michel Butor Mobile, in which he was a writer-character. After this last experiment, I suggested to him, in 2001 I think, that he come up with a feature-length script about a city, knowing that Michel Butor was a great traveller. For personal reasons I was thinking of venturing to Turin, Italy; instead, he suggested Venice. From all that, the artistic project Rouge Carpaccio was born years later. I had to be able to free up enough time to do this project justice...

No. But once I started working on the Rouge Carpaccio project, I would have liked to have had discussions with him about the narrative of the script he had written with Mireille Calle-Gruber. However, I kept what he showed me through Venice: appearance as the only real thing, the reign of illusions. Venice is a city where you lose yourself, where you feel like someone else... For the artistic project, I retained the spirit

What relationship does Rouge Carpaccio have with the painter to whom the title refers, Vittore Carpaccio?

Michel Butor’s narrative was entitled The Morose Knight (“Le Chevalier Morose”) – borrowed from Michel Serres’ Aesthetics on Carpaccio: the figure of the knight embodies the heroine’s obsession with young men. I wanted to name the project Rouge Carpaccio, to directly evoke the heroine's desire through that very powerful red found in Carpaccio’s paintings, particularly in Portrait of a Knight. Red, its intensity, creates disruptions in the story and becomes the driving force of the narrative. And also its signature.

You are used to revisiting disciplines, deconstructing cinema by presenting your films both in a classic format and in exhibition venues. How does Rouge Carpaccio fit into your overall approach?

This artistic project, like my previous ones, is a matrix for producing new works and new realities: the reality that is initially created by the film, then the reality that will be created by the installation. I build a feature film and then I deconstruct it for the exhibition, selecting scenes, editing unused rushes, or even using scenes shot specifically for this version. Rouge Carpaccio should be a “Janus”, a two-faced work: it calls on loops, spirals, labyrinths, which manifests what I felt in Venice – like I did previously with Brazil in the film and installation Dédale. My vision of reality is like the walks you can take in a city like Venice: always the same, yet always different.

Pierre Coulibeuf benefited from the support of the Institut français through its Custom Residencies programme, which allowed him to visit Venice 2019 for his Rouge Carpaccio project. Learn more about the Institut Français residency programmes

Image
Close up
French artists at the Bergen Assembly 2022

Image
Close up
"Gulbenkian Revealed: in the Collector’s Private Realm" - an exhibition as part of the France-Portugal Season 2022