Zineb Sedira's career follows an itinerary formed by three countries: France, the country where she was born and raised, Algeria, her parents' country of origin, and England, the country where she lives. As in her iconic work Mother Tongue, a film installation created in 2002, in her personal and artistic career, she embodies a complex cartography of Europe and Africa.

Born in Gennevilliers, Zineb Sedira spent her childhood there marked by the development of her passion for cinema and learning about cultural difference, its diversity and its problems. In 1986, she left to study in England and has lived there ever since. It was here that she developed an autobiographical work based on her vast heritage, around questions of identity and individual and collective memories. In 2002, she was invited to Algeria on a professional basis for the first time, which marked an important stage in her artistic work.

For several years now, her work has shifted from a memorial approach linked to her family history to more universal questions, by broadening the colonial question to that of economic and human flows, and more broadly to that of the circulation of ideas. 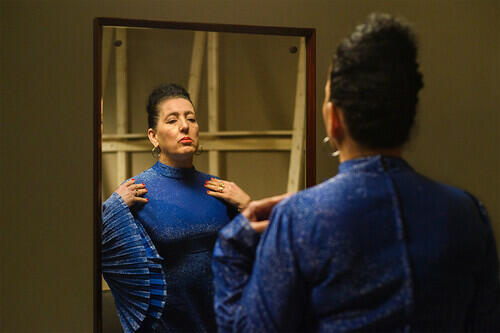 The French Pavilion at the Biennale di Venezia 2022

With her curators, Yasmina Reggad, Sam Bardaouil and Till Fellrath, Zineb Sedira transforms the French Pavilion into a cinematographic installation where the film Dreams Have No Titles helps to immerse visitors in a project with profoundly humanistic undertones.

The French Pavilion presents Zineb Sedira's multidisciplinary exhibition, an immersive installation combining film, sculpture, photography, sound and collage. In keeping with her artistic practice, Zineb Sedira uses autobiographical narrative, fiction and documentary to highlight international solidarity, past and present, linked to historical struggles for liberation. Her approach also serves as a warning about the failure of a promise of freedom that, for many people, remains an unfulfilled, even unattainable dream. 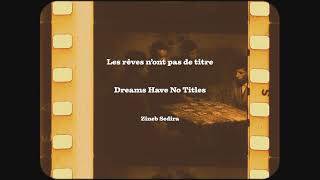 In Dreams Have No Titles, the artist addresses a major turning point in the history of cultural, intellectual and avant-garde production in the 1960s, 1970s and beyond, particularly in France, Italy and Algeria. It focuses on a corpus of co-productions and film productions, particularly of a militant nature, which had an impact on post-colonial movements.

Zineb Sedira's exhibition is a mirror ball inviting the spectator to dance - to dance to resist, to dance to be reborn, to dance to dream... And her dreams have no title.

Echoes around the pavilion

The project presented by the artist Zineb Sedira in the French Pavilion of the Venice Biennale of Art extends beyond the presentation of the work on site from 23 April to 27 November 2022. The echoes around the project begin beforehand, during the Biennale, and continue long afterwards.

dreamshavenotitles.com
The Institut français and the project
Image

The French Pavilion at the Biennale di Venezia 2022 is operated by the Institut français.

The Institut français also supports, as part of "Relance export", six French artists of the International Art Exhibition, The Milk of Dreams curated by Cecilia Alemani.

"The French and Portuguese coasts under the eye of satellites" - an exhibition in Bordeaux from 4 to 29 April
(France-Portugal 2022 Season) The Frac des Pays de la Loire presents the exhibition "Communauté imaginée"
See all close-ups
L'institut français, LAB
Grenouilles
Surprise me