From 15 to 19 June, the Institut français is organising a Dance FOCUS as part of the Nomadanse festival

The festival Nomadanse allows us to highlight extraordinary landscapes and heritage spaces that are not well known, by making them resonate with artistic proposals.

The Nomadanse travelling festival takes place from 2 to 18 June with a route along the canal from Nantes to Brest. In partnership with the association Danse à tous les étages, founder of this festival, the FAIR-E collective, the Etablissement public de coopération culturelle (EPCC) Spectacle Vivant en Bretagne and the Region of Brittany, the Institut français is offering a new Dance FOCUS from 15 to 19 June. The aim is to bring together professionals invited by the French cultural network abroad, with the aim of facilitating the identification of sectors of French cultural creation and encouraging their dissemination throughout the world. We met Natacha Le Fresne, director of Danse à tous les étages to discuss the event.

Can you tell us about your background?

I am first and foremost a passionate fan of dance: I have always practised it and I have always taken great pleasure in discovering new shows. This is why I chose to make it my profession, starting by supporting artists in their development. I worked for ten years with choreographic companies, notably in Paris with the company Mille Plateaux Associés, alongside Geisha Fontaine and Pierre Cottreau, with whom I had a lot of pleasure in interacting. About ten years ago, I moved to Brittany and supported the development of the artists Maud Le Pladec and Thierry Micouin, who were beginning their careers as choreographers. One of my priorities has always been to create international links to allow these shows to travel. In particular, I have participated in residencies in the United States and Japan: the question of intercultural exchanges around dance, such a universal art, is something that has interested me for many years. Following this, I also worked at the Centre Chorégraphique National de Rennes et de Bretagne, where I accompanied the Museum of Dance project led by Boris Charmatz, and then the arrival of the FAIR-E collective, who recently took over as director.

You have been running Danse à tous les étages for two years now. What are the missions and particularities of this association based in Rennes?

Danse à tous les étages is a regional stage for dance, currently in the process of becoming a National Choreographic Development Centre. Its particularity, since its foundation twenty-five years ago, is to be itinerant and nomadic. This is intimately linked to our project, which reaches out to people and territories where dance and choreographic art are rarely encountered. We therefore see ourselves as a sort of local choreographic centre, which travels to propose projects in connection with particular environments. We also have very specific ways of working, since we don't have a regular venue or an audience that follows us on a regular basis.

You also run the Nomadanse festival, which had its first edition in 2021, and which will take place this year from 2 to 18 June 2022. How did you come up with the idea of a travelling festival around the canal that links Nantes to Brest?

This canal runs through the interior of Brittany, an area that is lacking a cultural network and recognised structures. The idea was therefore to travel to places that were not obvious at first sight. It is also an axis that offers extraordinary landscapes and heritage spaces that are not well known. The festival allows us to highlight them, by making them resonate with artistic proposals. So we set up stages and sets in unusual places: tennis courts, forests, beaches, etc. Nomadanse is also an opportunity for residencies so that the artists can forge links with the inhabitants. 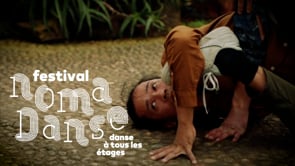 What will be the highlights of the festival programme this year?

Certainly the revival of Blank Placard Dance, a major work by Anna Halprin, by a collective of women led by Anne Collod and Cécile Proust. It involves a meander through the public spaces of Brest at the beginning of the tour, with nearly thirty local women. There will also be an evening in Baud, as part of the Focus programme for international professionals, which will be a key highlight. It has been organised around a music and dance school with programming from three emerging artists: Leïla Ka, Louis Barreau and Bruce Chiefare, who is interested in the links between breakdancing and natural spaces. National and international programmers, artists, local schools and, of course, local people will be in attendance.

How does the festival work with the various local and international professional stakeholders?

We are always developing in cooperation with ecosystems: local communities, social and educational stakeholders, cultural stakeholders. This takes us to rural areas where there is no other cultural network. We must therefore adapt to each context, which also represents a very interesting challenge for artists. It should be noted that dance is a field that has always had major problems in terms of distribution: on average, a piece is only performed between two and five times, sometimes at the end of a creation process that takes a whole year. We therefore also try to offer dance in places where it is otherwise absent.

The Institut français is organising a Dance Focus from 15 to 19 June 2022, in partnership with Nomadanse. A scouting tour is being organised for 19 international programmers. Why did you decide to host this Focus as part of Nomadanse and what do you expect from these meetings?

This Focus brings together for Nomadanse, the Institut français, Danse à tous les étages, the Centre Chorégraphique de Rennes et de Bretagne led by the FAIR-E Collective, the regional agency Spectacle Vivant en Bretagne and the Brittany Region. It is a meeting that has been developed with all of these partners, with cooperation and roaming as its theme, which are of course at the heart of the Danse à tous les étages project. Another issue that will be highlighted is that of self-training, and therefore more broadly of training, or the lack of it. How can you make yourself visible when you don't come from the world of institutions? This Focus will be an opportunity to see performances, but also to establish dialogue between professionals from all over the world, who will be able to give feedback on their ways of thinking and working. This has been made possible by the various branches of the Institut français, which have done a great job of identifying professionals and programmers who are sensitive to these issues.

Image
Interview
The director of the Centre Culturel Kôrè, Mamou Daffé, discusses the future of the AWA programme

To mark the Immersive Experiences (XR) FOCUS organised by the Institut français, we meet the director of the Grand Palais Immersif, Roei Amit
Rui Paixão created “Kinski”, performed in Lyon as part of the France-Portugal Season 2022
See all interviews
L'institut français, LAB
Grenouilles
Surprise me