What if the East and the West were actually just one big region? This is the question posed in this bountiful novel by Mathias Enard, winner of the 2015 Goncourt Prize.

From languages to literature

After a stationary youth spent near Niort, his home in the west of France, Mathias Enard moved to Paris. He first studied at the Louvre School, where he became familiar with the history of art, then fell in love with languages and enrolled at the National Institute of Eastern Languages and Civilizations, before moving to Lebanon for the first time in 1991.

Although he did not finish his thesis on “Arab and Persian poetry of the post-war period, and its relationship with the literature of Europe”, this nevertheless was the beginning of his passion for literature and the Middle East, where he lived for several years.

His first novel, The Perfection of the Shot (“La Perfection du tir”) (Actes Sud, 2003) marked the first step in a prolific and erudite career.

“Gateway to the East”

The tale of Compass (2015) begins in Vienna, Austria, in the apartment of a musicologist suffering from insomnia. Memories of travel and adventure haunt Franz Ritter’s sleepless nights, keeping him awake.

His wanderings are an opportunity for Mathias Enard to discuss the relationship between the West and the East, through erudite anecdotes about the people who have been interested in them, from Balzac to Kafka by way of Wagner.

This dense and clever narrative, which juggles the construction of a character with a multi-temporal perspective, testifies both to the author’s fascination with the Middle East and to the joys of storytelling.

Just as Compass builds a bridge between East and West, it also stands at the crossroads between past and present, highlighting the region’s major geopolitical challenges.

The novel is the result of rigorous research. From 2005 to 2007, when the first drafts were written, Mathias Enard accumulated notes on the actors and anecdotes that have influenced the relations between Europe and the Middle East, strongly anchoring his character's memories in historical reality.

A tribute to orientalism

With Compass, Mathias Enard solidified the success of Street of Thieves (Rue des voleurs, 2012), whose action takes place against the backdrop of the Arab Spring and which was selected in 2012 for the Goncourt Choice of the East. Three years later, Compass won the Goncourt Prize.

L'Orient littéraire, a supplement of the Lebanese French-language daily L'Orient-Le Jour, welcomed the “tribute to orientalism” of this narrative which describes the “tumultuous relationship between East and West, which has shaped the identity of each side as much as the other”.

Translated into English, Compass was a finalist for the 2017 Man Booker Prize International, which recognises the best works of translated fiction available in English. 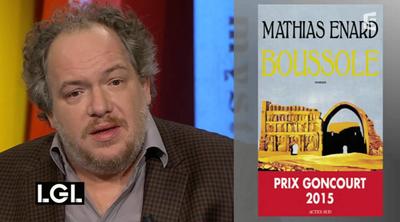 Compass (“Boussole”) has been translated, with the support of the Institut français, into English, Serbian, Ukrainian, Dutch, Arabic, Polish, Hungarian and Chinese.