Beginning from the notes of a former soldier, Jean Echenoz recounts the First World War through the tale of one of its ordinary characters. His fluent prose and succinct descriptions make it an instant classic of its genre.

We know very little about Jean Echenoz's life, only that he was born in 1937 in Orange (southern France) and lived in Aveyron and the Alps before moving to Paris in 1970.

However, the literary activity of this private writer is as well documented as it is rewarded. His first novel, The Greenwich Meridian (“Le Méridien de Greenwich”) (1979) received the Prix Fénelon Prize, followed by the Prix Médicis for Cherokee in 1983 and in 1999, the Prix Goncourt for I'm Off (“Je m'en vais”).

These distinctions recognized, among other things, the writer’s meticulous style which was inspired by cinematographic storytelling, and which critics regularly often with the Nouveau Roman of the 1950s due to its disregard for the rules of novelistic writing.

War seen from below

From a windy knoll, Anthime hears the alarm bells announcing the 1914 mobilisation. He soon finds himself in uniform, in Nantes barracks, with other enlistees from his village. One of them, Charles, a swaggering young man who loves planes and photography, insists that the war will be over in a flash. The two men are soon separated: Anthime is sent to the front, Charles is transferred to aviation.

The intertwined destinies of these characters provide an opportunity for the author of 14 to paint a complete picture of war, describing in turn everything from the place of women in the background, to daily life in the trenches or court marshals.

After a biographical triptych dedicated to the composer Maurice Ravel, the runner Emil Zátopek and the inventor Nikola Tesla (Ravel, 2006; Running (“Courir”), 2008; Lightning Bolts (“Les Eclairs”), 2010), Jean Echenoz returned to less-famous characters. The heroes of 14 (2012) are simple Vendée villagers, caught in a war far beyond them, a “sordid opera” in the words of the author.

It was pure chance that put the notebook of a conscript, a distant member of his partner's family, into Jean Echenoz’ hands. Without any particular project in mind he decided to transcribe it, and it was during this process that the idea for a story about the Great War emerged. After two years of research and reading, from Under Fire (“Feu”) by Henri Barbusse in 1916 to The Fear (“La Peur”) by Gabriel Chevallier (1930), Jean Echenoz created a tale on a human scale, without seeking to rewrite an already well-documented collective story.

A local narrative of a World War

In 14, Jean Echenoz chronicles one of the darkest, but also most formative periods in European history. In the midst of the commemoration of the centenary of the Great War, he provides a valuable testimony to the lived experience of the war.

Translated into English, Serbian, Ukrainian and even Dutch, the novel has been truly successful abroad. Max Byrd of the New Yorker, praised it as having the “density of a poem”, referring to the incisive style of this short and personal tale. Miguel Mora in the Spanish newspaper El País and Ajay Menon of The Hindu also paid tribute to this work which is well on its way to becoming a reference for any study of World War I. 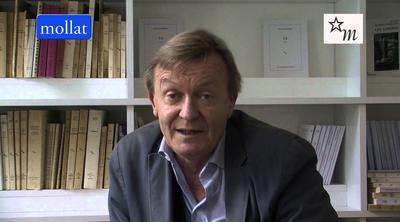 14 has been translated into Slovenian, Serbian, Japanese, Chinese and Dutch with the support of the Institut français.