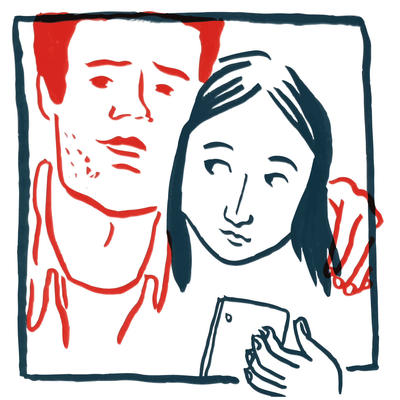 L'amour a ses réseaux, by Cécile Rousset and Romain Blanc-Tailleur

Finding one’s soulmate with a smartphone might not be quite as easy as dating applications promise. In any case, such is the observation – sensitive and sharp in equal measure – made by the authors of this colourful animated web series.

A trio of decorative arts

Behind the web series are filmmakers Romain Blanc-Tailleur and Cécile Rousset, joined for some episodes by Adrienne Nowak. All three studied at the École Nationale des Arts Décoratifs (ENSAD) in Paris. Rousset demonstrated a flair for documentary animation early on with her short films Paul (2005), Je suis une voix (2007) and Et ta prostate, ça va ? (2015). She also makes animated sequences for fictional films such as Le Hérisson (The Hedgehog, 2009).

After a few experiments inspired by the principles of Ouilipo – L'Ouvroir de littérature potentielle or “workshop of potential literature” – (Glong ! in 2008 and Mars in 2012), Blanc-Tailleur moved into animated documentary series with Zooz (2015). Meanwhile, Nowak made her first animated short film, Gusla ou les malins (2016) based on her family history. These three perspectives are what give L'amour a ses réseaux (Fail in Love, 2020) its unique style.

Ernestine swipes Tinder profiles in Berlin, but doesn’t want to be Franz’s bit on the side. Maxence is drowning in the wild imaginings of his Grindr date. After a failed romance, Melina is becoming hooked on dating apps to the point of losing all hope. In 13 four-minute accounts brought to life through naive pastel graphics, L'amour a ses réseaux deciphers the mechanics of love in the age of the internet and smartphones. A kaleidoscope in which ingenuity and humour are sometimes intertwined with a chilling melancholia.

Based on true stories

Before it became a web series, L'Amour a ses réseaux was a blog run by the journalist at Rue 89, Renée Greusard. She had the idea in 2016, after an evening hearing her friend’s hilarious confessions of her more unfortunate meet-ups thanks (or no thanks) to dating apps. She decided to document this new space of the Map of Tendre by compiling users’ stories on a site named “Tinder surprise”. In 2020, over 130 of these tales were shared and the production company Darjeeling offered to make them into an animated series. Greusard chose thirteen emblematic stories to record, which she then entrusted to Blanc-Tailleur and Rousset.

Although the ways in which our love lives have been shaken up by the virtual world have already been explored in publications and studies, such as those by Swedish sociologist Marie Bergström, L'amour a ses réseaux offers a more offbeat perspective on the issue. Shown on the digital portal of the Franco-German channel ARTE, the series has also won accolades at major international animation festivals, including those in Annecy, Ottawa and Manchester. The episode “Petit piment” was even awarded the prize for best animated film at the Berlin Short Film Festival.

The webserie L'amour a ses réseaux, by Cécile Rousset and Romain Blanc-Tailleur, is part of the works exposed in Futurimage, a platform which provides a rich panorama of new forms of narrations.