One of the greatest French artistsAn installation alive with historyVideo, the medium of proximity A World Tour beginning in ChileThe Institut français and the project
Visual arts
#22
Work

Initially installed in the desert at the heart of Chile, the hundreds of bells of Animitas form a poetic melody, a tribute to victims of political violence and to the artist himself.

One of the greatest French artists

Born in 1944, French visual artist Christian Boltanski began painting at the age of 14, before exploring other mediums. Now one of the best-known French artists in the world, in 2015 he represented France at the 54th Venice Biennale, with Chance, an examination of life, chance and fate.

His work often refers to the Holocaust, as with People (“Personnes”), presented on the occasion of Monumenta 2010 at the Grand Palais. In 2018, he installed NA in the nave of the Oude Kerk in Amsterdam, a meditative work in memory of the 2,500 dead buried in the church.

An installation alive with history

Carrying the name of the altars where the indigenous honour their dead, Animitas is made up of several hundred Japanese bells – which, for Christian Boltanski, represent “the ghosts around us” – attached to rods planted on the ground in order to draw a map of the sky on 6 September 1944, the day the artist was born.

The work has been presented in many open-air formats: the number of bells, to which are attached small transparent plastic tabs, has already varied from 200 to over 800 depending on the available space.

Animitas can also be installed indoors.

Video, the medium of proximity

Animitas was created for "Almas", the retrospective dedicated to Christian Boltanski organised by the Museum of Fine Arts in Santiago, Chile in 2014. The bells were then installed by a local indigenous community in the Atacama Desert, on the site of a former concentration camp from the Pinochet dictatorship.

The installation was broadcast live in a museum room, through a recording lasting more than 13 hours, which is used today when the work is displayed indoors. In this case the projection hangs over a carpet of grass and flowers.

A World Tour beginning in Chile

After Santiago, Chile in 2014, Animitas was presented in many cities around the world, starting with Paris, the same year. A model of the installation was placed in the Jardin des Tuileries for the International Fair of Contemporary Art. The work has also been installed in a sculpture park in Edinburgh since the end of July 2016.

In its interior version, with video and a plant-carpet, Animitas has become a truly mobile work, projected in 2015 at the Venice Biennale and the Marian Goodman Gallery in Paris, in 2016 at the Teien Museum in Tokyo and at the end of 2017 in Munich, all while remaining deeply rooted in the Atacama Desert. 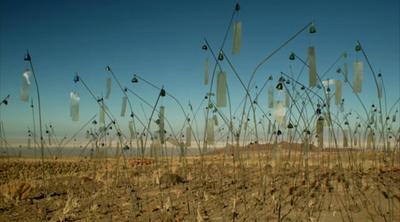 Animitas was displayed in Israel from 1st June to 3rd November 2018, as part of Christian Boltanski’s “Lifetime” exhibition for the France-Israel Season.

The France-Israel Season 2018 (June-November 2018) is organised and implemented by the Institut français, the Ministry of Foreign Affairs of the State of Israel, and the embassies of both countries.