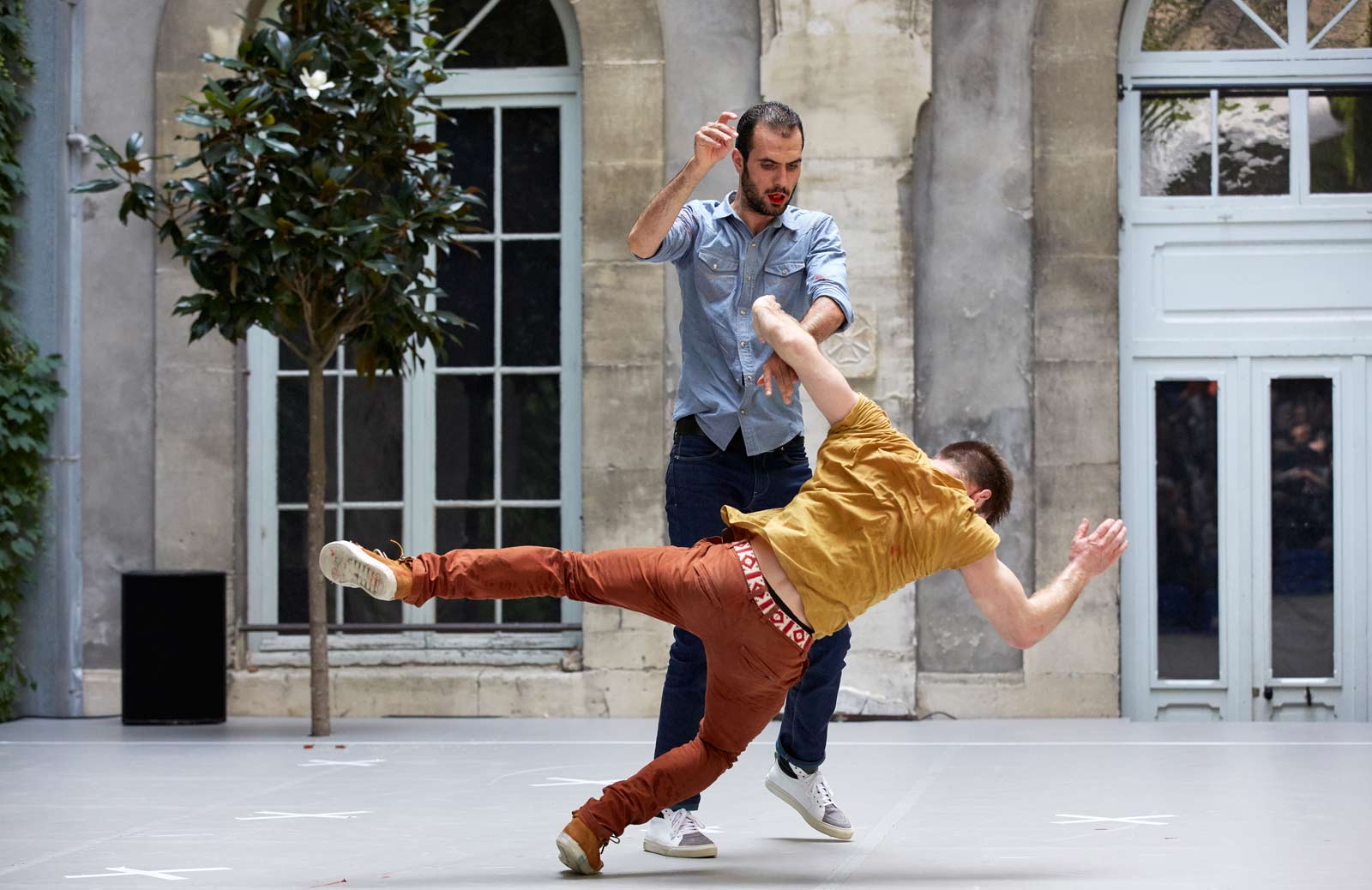 Bataille (2013) by Pierre Rigal emerged from a meeting of corporeal percussion and acrobatics, and is a duo where violence and laughter, blows and caresses come together. A choreographic hand-to-hand combat needing great technical ability and crazy intuition.

Pierre Rigal was French junior champion in the 400-metre hurdles in 1992, and has both a masters in mathematical economics and a post-graduate film degree. he discovered dance by chance at 23, when doing an African dance class which showed him he could express himself in other ways using his body. He trained with Philippe Découflé and Wim Vandekeybus before starting to choreograph at the age of 30 with Érection (2003).

His creative process involves working as much with hip-hop dancers (Asphalte in 2009) as acrobats (Arrêts de jeu in 2006, which choreographed a football match), and takes inspiration from corporeal percussion for his Bataille duo (2013), a rock concert for Micro (2010) or classical dance in Salut (2015), created for the Paris Opera Ballet.

As its name implies, it all starts with a fight. The stage has no accessories, the decor is nothing but a stage curtain – Bataille can be played out on a theatre stage or outside. All that counts is the sometimes violent hand-to-hand combat that arises from the outset, the duo often hitting the ground.

But is it really aggressive ? The battle taking place on the stage is ambiguous. And little by little, the violence subsides, the bodies take control of themselves, laughter erupts, the blows become caresses… Before building to become more and more brutal and harder, and the fight starting up again.

But Bataille is not about winning. It is more a confrontation granted between one’s self and one’s sub-consciousness. A choreographic face-to-face confronting the flow of life that is never lacking absurdity.

Pierre Rigal likes to work with artists from different backgrounds. Bataille therefore came about after he met Hassan Razak, a corporeal percussion specialist – dance where the body serves as a musical instrument – and performer Pierre Cartonnet. The first has been directing the company Onstap in Avignon since 2004 ; the second works as an acrobat for Aurélien Bory or as an actor in theatre (Peer Gynt by David Bobée) or television (the French series Les Témoins).

Pierre Rigal has mixed corporeal percussion with acrobatics that alternate and dialogue to form a unique choreographic language. Nothing is left to chance in the gestures, everything is highly studied, demanding on the technical level, all while permanently giving the impression that it’s all improvised, where the feeling and freedom in movement get the upper hand.

A dance piece with international vocation

Pierre Rigal has always had international reach : some of his pieces have already been shown more than 200 times. Bataille is no exception.

The piece was staged at the Festival d’Avignon as part of Sujets à Vif in 2013, and continues to tour somewhere in the world seven years after it was created, whether in Spain, Switzerland, Argentina, Brazil, Colombia, Tunisia during the Rencontres chorégraphiques de Carthage (Carthage Choreographic Meetings) in 2017 or Ecuador in 2020.

Bataille, by Pierre Rigal is one of the works selected for the 2020 edition of La Collection, a programme of the Institut français.

La Collection is a system that brings together 90 turnkey, light and modular proposals for the French cultural network abroad, in the fields of the performing arts, visual arts and architecture, urban planning and landscape, all of which are light in terms of distribution and modularity.