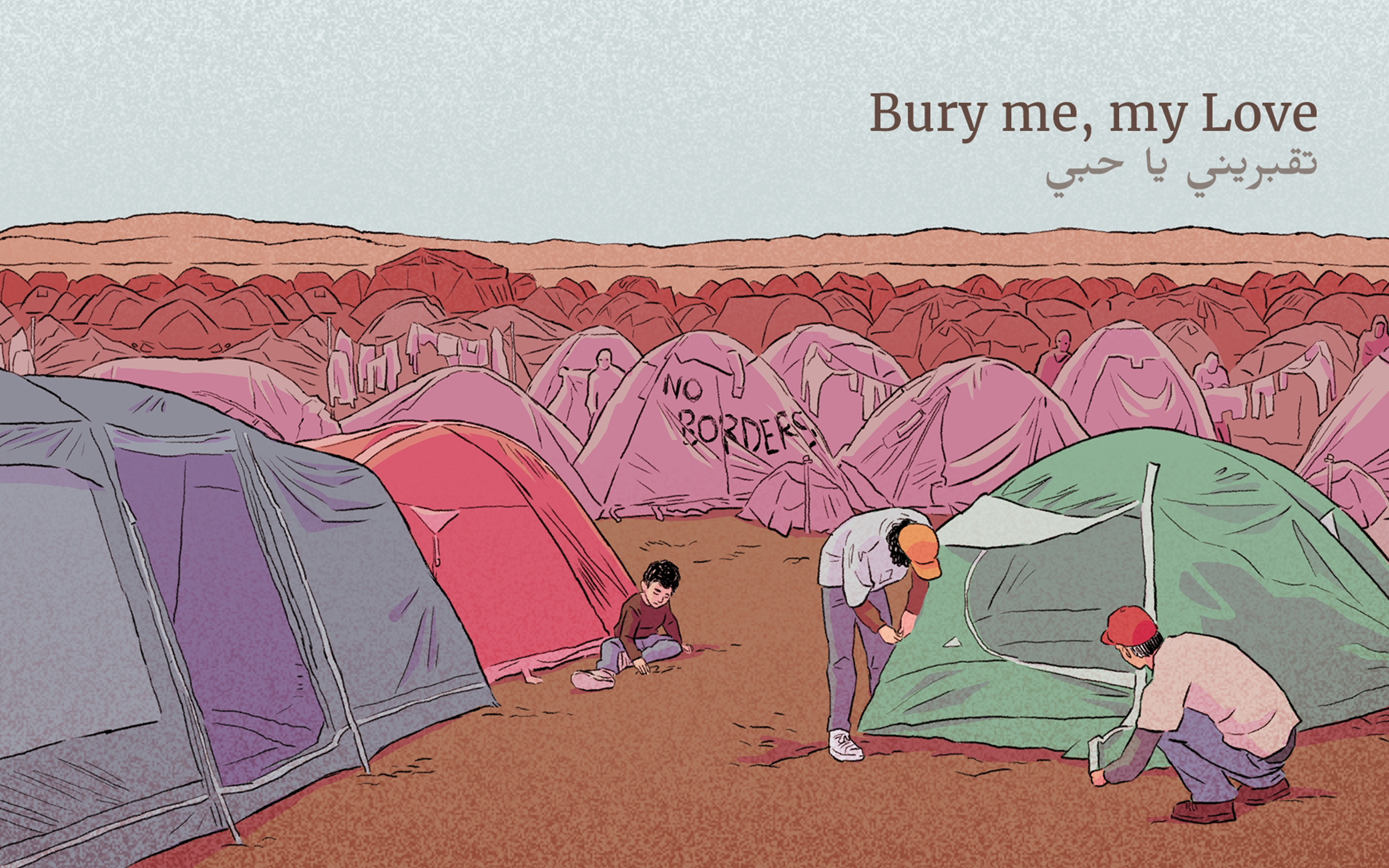 Bury me, my Love (“Enterre-moi, mon Amour”) by Pierre Corbinais and Florent Maurin

By inviting smartphone users to participate in the fate of a Syrian woman fleeing the war, Pierre Corbinais and Florent Maurin revisit the video game to raise awareness among their audience about the condition of migrants.

Pierre Corbinais was a librarian before turning to journalism and the production of alternative and experimental video games.

Florent Maurin worked for the Bayard group on an educational app aimed at young people, before creating the production company The Pixel Hunt in 2013 which specializes in "reality games".

Together they form the duo behind Bury me, my Love, a project that is both innovative and sensitive, brilliantly illustrated by Matthieu Godet, a video game programmer and animator.

A realistic and interactive tale

Bury me, my Love takes inspiration from reality as it tells the story of Nour, a young Syrian woman who fled the bombings of the city of Homs in search of Europe. In this app, the player is Majd, Nour’s husband who remained in Syria.

Majd must help his wife achieve her goal by guiding her using instant messages so she can cross the borders, finding food and a place to sleep. Each message from Majd influences Nour’s decisions and the story’s path.

An app inspired by reality

The story and the conversations in the game are based on an article from Le Monde published in December 2015, in which journalist Lucie Soullier tells the tale of the exile of Dana, a young Syrian woman, via WhatsApp messages.

For the sake of realism, the authors contacted Dana, who currently lives in Germany, and Lucie Soullier to work as editorial advisors.

Although the characters are fictitious, they are heavily inspired by this young woman’s story, that of her family and of the thousands of migrants who attempt to enter Europe every day.

Co-produced by Arte France, The Pixel Hunts and Figs, Bury me, my Love reached far beyond the French borders with the story of Nour's exile.

The app was nominated in two categories at the British Academy Games Awards 2018 (BAFTA) and at the 2017 Game Awards in Los Angeles in the category “Games for Impact”. It was also a finalist at the 2017 MAGIC in Monaco and received the first prize at the Google Play Indie Games competition in London in 2018.

Bury me, my Love (“Enterre-moi, mon Amour”) by Pierre Corbinais and Florent Maurin is presented as part of “Reading Machines”, an exhibition dedicated to innovative books produced by the Institut français and touring internationally across the French cultural network abroad. It is also part of the selection available on futurlivre.fr, a platform that collects and promotes works falling under the umbrella of innovative books.