workscross
Visual arts in cinemaTwo women, one man and Cairo Collaborative spirit and crowdfundingThe international in service of the local The Institut français and the project
Cinema
Work

Cactus Flowers, which came to be thanks in part to a crowdfunding campaign, recounts the epic, poetic tale, set the megalopolis of Cairo, of characters in the process of discovering themselves.

Born in Cairo in 1974, Hala Elkoussy studied images and communication at Goldsmiths College, London, from which she graduated in 2001. The young Egyptian was initially interested in visual arts: she taught photography, created the Contemporary Image Collective with other artists from Cairo and, between 2000 and 2010, produced various exhibitions, in particular at the Tate Modern in London or the Stedelijk Museum in Amsterdam. In 2010, she received the Abraaj Group Art Prize.

After a two-year residency at the Royal Academy of Fine Arts in Amsterdam, Hala Elkoussy took up film-making with the well-received short film, Mount of Forgetfulness (2010), followed by her first feature film, Cactus Flowers (2017). Combining cinema and photography, she produces documentary-esque fictions about Cairo and its inhabitants.

Two women, one man and Cairo

It is by chance that the three protagonists of Cactus Flowers find themselves walking together on the streets of Cairo. After a flood, Aida Hussein, a young out-of-work actress, and Samiha, a seventy-year-old from an upper-class background, find themselves homeless. This accidental adventure leads them to build connections with Yassin, who knows the streets well.

From the chaos of their wandering a kind of order eventually arises, built from the memories and interactions of the characters, and symbolised by the choreographies that set the rhythms of their adventures. As with cactus flowers, the adversity of their living conditions creates unexpected beauty. 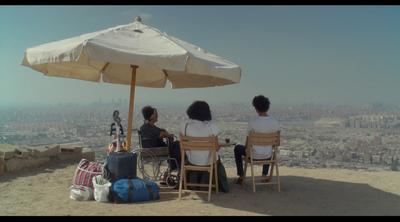 In an Egypt where independent films struggle to find funding, Cactus Flowers experimented with alternative solutions. Taking advantage of the recognition that she has obtained in visual arts, Hala Elkoussy sought to publicize her project through a crowdfunding campaign. Although the director raised the majority of the funds through personal relationships, often with people from outside Egypt, she wanted, through crowdfunding, to demonstrate a new method to other artists in the region.

With 100,000 Egyptian pounds (approximately 4,700 euros) collected through this crowdfunding and sponsorship, the production had to make do with very limited resources, including voluntary work on the part of the film team.

The creative process was also collaborative: the actors themselves contributed to the script through writing workshops.

The international in service of the local

The creation of Cactus Flowers relied on the international recognition of its director, Hala Elkoussy. From its inception, the film received attention from outside Egypt's borders. In 2010 the director received a Hubert Bals grant, from the Rotterdam International Film Festival, to develop the project and script and support for the production from the Aide aux cinémas du monde (Institut français/CNC) in 2015.

Menha El Batraoui won the award for the best actress for her performance in the role of Samiha, one of the three main characters in Cactus Flowers, at the Dubai International Film Festival.

Cactus Flowers was supported by the Institut français’ Fabrique Cinéma in 2015.