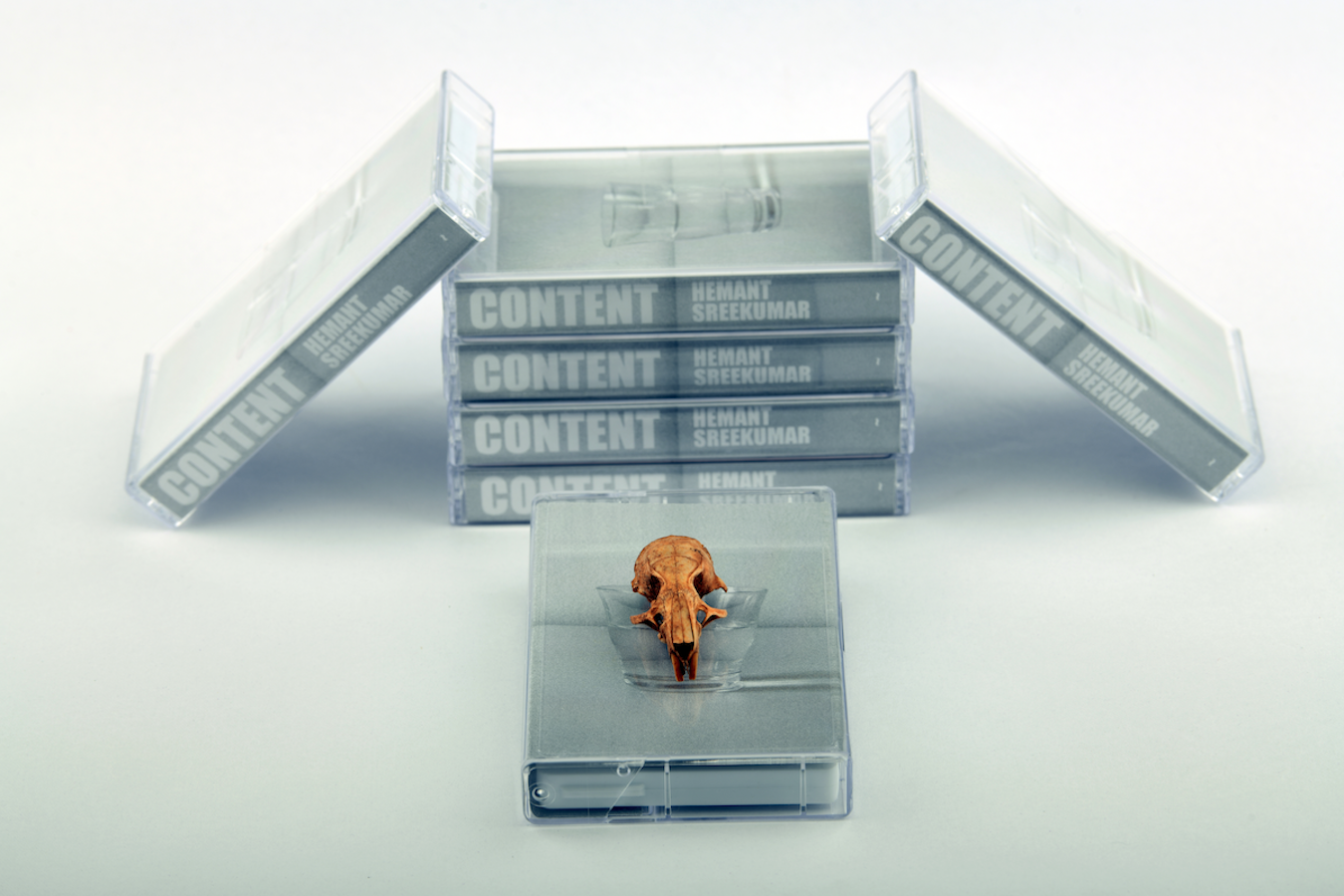 Questioning the contemporary era and its obsession with « content » that transforms individuals into consumers, Hemant Sreekumar produced Everyone is content, a concept album recorded on audio cassettes with abstract sounds, now available online.

DIYer of past technologies

Born in 1980 in Kerala, India, Hemant Sreekumar started out studying philosophy and the visual arts at Maharaja Sayajirao University in Baroda. After graduating in 2004, he completed a master’s degree in digital arts in Germany at the University of the Arts in Bremen, and then specialised in data visualisation.

Heavily invested in sound experimentation, Hemant Sreekumar sees the medium of the cassette as a strength : that of escaping the great whirlwind of platforms such as Spotify or Deezer, which he describes as « streaming supermarkets », and avoiding playlists, comments and sharing.

Composed of eight pieces that each last between four and eight minutes, the complete work is composed of two actions : hitting and compressing. Radical and highly critical of electronic music, whose standardisation he denounces, Hemant Sreekumar illustrates the cover of his project with a simple photograph of a glass of water by Philippe Calia. Two black-and-white clips by Rana Ghose feature archive footage of a trance - a man surrounded by insects and a dance party.

The album Everyone is content was composed, optimised and recorded during Hemant Sreekumar’s residency in Paris, at the Cité internationale des arts in autumn/winter 2019.

Against all expectations, in the French capital the artist encountered a wide variety of very hard sounds, to which he was as attentive as a concert of abstract sounds. This discovery inspired him to record and immortalise sound material that he usually only uses in live performance.

The result is more of a non-visual rather than musical abstract experience. Hemant Sreekumar explains that he controlled his recordings with a very small speaker of poor quality.

A collaboration between India and Paris

Hemant Sreekumar came to residency in Paris with an idea : to undertake empirical research of sounds specific to the territory, and to create an aesthetic situation project where spectators are immersed in an experience that is purely acoustic.

The result came from a dialogue between the two countries : created in Paris, it is illustrated by a photograph by Philippe Calia, a French artist based in Mumbai, India, and clips by Rana Ghose, the Indian director and director of Reproduce Artists. It is distributed internationally via the everyoneiscontent.com website.

As part of the residency programme of the Institut français at the Cité internationale des arts, Hemant Sreekumar benefited in 2019 from a residency in Paris.

The project received support from the Prameya Art Foundation and the Institut français in India.

Discover the residency programme at the Cité internationale des arts