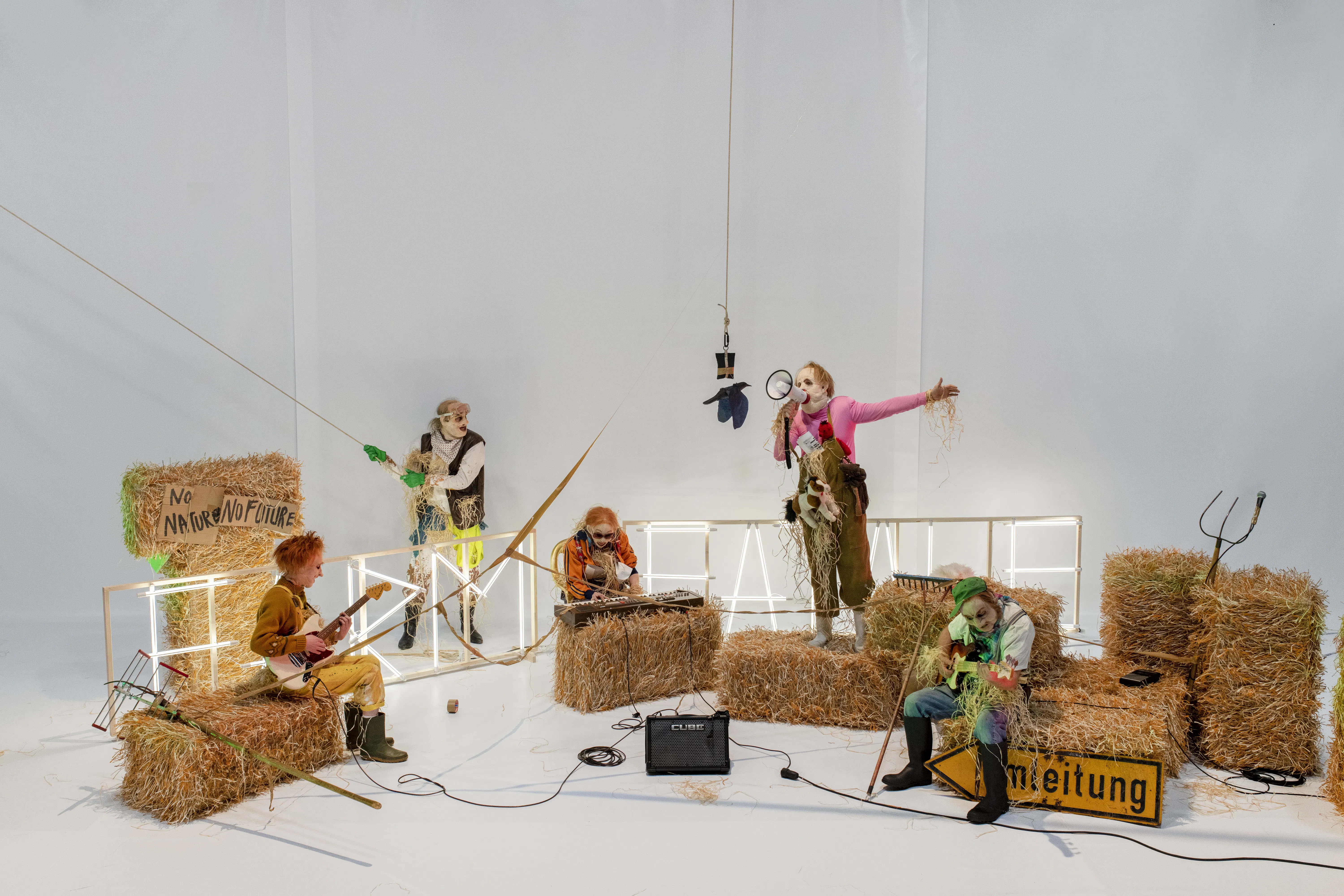 Through the reflections of five idle clowns or « scarecrow philosophers », the playwright Philippe Quesne questions our relationship with nature. His Farm Fatale (2019) is an insightful environmental tale about the future of humanity.

Performance at its heart

After studying visual arts at the École Estienne and then at the Arts Décoratifs, Philippe Quesne embarked upon a career as a set designer. When he founded the Vivarium Studio company in 2003, the visual arts component took centre stage in his work. The company is made up of artists from all backgrounds, who place the set at the heart of the drama in each of his pieces. From The Melancholy of Dragons (La Mélancolie des Dragons) (2008) to Crash Park (2013), Philippe Quesne’s shows are places of observation, where small communities make merry. In shows like Night of the Moles (La Nuit des taupes) (2016), he also shows an affection for underground worlds with a rock ambiance, populated by burlesque, polymorphic beings. In 2014 he was appointed head of the Théâtre des Amandiers, a role he has decided to leave at the end of 2020.

A tale of the future

On a stripped-back white stage that evokes the distant memory of a farm with its bales of hay, pitchforks and animals, five clowns record the world's last sounds, playing music and engaging in some surprising verbal jousting. Wearing masks and with straw hanging out of their clothes, they look more like scarecrows than human beings. They are, however, the last remnants of a humanity poisoned by intensive farming and the destructive pace of capitalism. Their strange and poetic words then take on a whole other meaning. What if the nostalgic Farm Fatale was essentially our future?

The origin of Farm Fatale can be traced back to Philippe Quesne’s previous show: Night of the Moles. This is when the playwright considered the possibility of a farming-themed work. The farm – one of the independent micro-worlds he is so fond of – came to him quickly. The idea of the scarecrow characters only came later, when he started working directly on the actors’ masks at the Munich Kammerspiele. With painted faces under masses of fabric giving them a zombie-like appearance, the farmers become the indeterminable and moving beings at the heart of the show.

From Germany to Brazil

Created in 2019 in Germany at the request of the Munich Kammerspiele, Farm Fatale features a multicultural European cast. Alongside two of Philippe Quesne's regulars – Léo Gobin and Gaëtan Vourc'h – we find three actors from the German theatre: Stefan Merki, Damian Rebgetz and Julia Riedler. Performed for the first time in Munich and then at the Théâtre des Amandiers, the show travels to South America in 2020, visiting the festival of São Paulo in Brazil and the Santiago a Mil festival in Chile.

Philippe Quesne's Farm Fatale will be performed at the Wiener Festwochen (Vienna Festival) from August 30 to September 2.