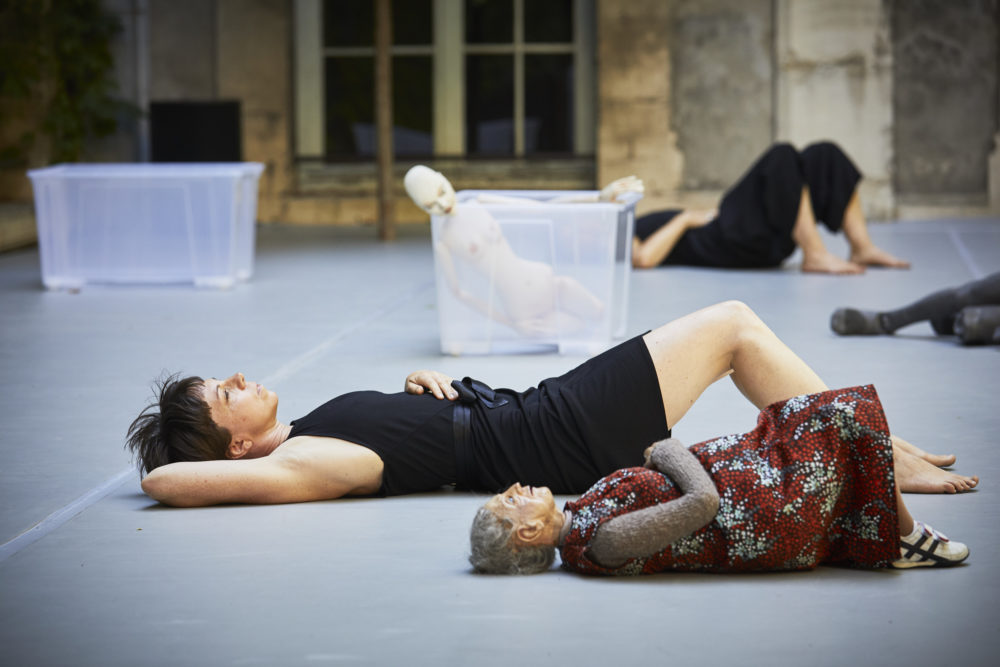 Mylène Benoît and Julika Mayer bring six recycled puppets back to life. Georges, a  poetic, humorous piece incorporating dance, blends the living bodies of the creators with the inanimate bodies of the puppets, asking viewers to question their understanding of death.

With her company Contour Progressif, founded in 2004, Mylène Benoît creates pieces which connect dance, singing, sound, moving lights, and optical or textual elements. The visual artist and choreographer questions how contemporary technologies and media shape the reality of the human body.

She and German puppeteer Julika Mayer created and perform Georges, a show which is full of humour despite its intimate connection with death.

Six big puppets sit curled up in transparent boxes. Mylène Benoît and Julika Mayer tell their story. They pull them out of their boxes with great tenderness. From then on, their destiny is narrated in voice-over.

The tempo varies: sometimes, the reanimated puppets and the two creators shake to the intense rhythm of rock music; sometimes, they move at the stately pace of a slow dance. Georges’ figurine is placed in the “coffin of memory”.

Then the two artists lie alongside the puppets on the ground. The room fills with a sensation of restfulness…

“What do we do to the dead? What do they do to us?” wonders Mylène Benoît. And in Georges, she breathes life back into puppets which were no longer being used by their creators and which were willingly lent out for the project by artists including Janusz Debinski, Florian Feisel, Arnaud Louskipane, Antje Töpfer and Julika Mayer.

While creating this, piece which relies on restrained gestures and a deep poetry, Mylène Benoît and Julika Mayer were inspired by Patti Smith's music and her book Woolgathering (1992), and by the book To the happiness of the dead: The stories of the remaining (“Au bonheur des morts : Récits de ceux qui restent”, 2015) by philosopher Vinciane Despret.

Mylène Benoît and Julika Mayer created Georges as part of the Sujets à Vif section at the 2018 Avignon Festival.

This fascinating multidisciplinary performance has since been presented in France in 2018 at the CDCN Hauts-de-France “L’échangeur” in Château Thierry, and in 2019 in Germany at the international figuren.theater.festival Erlangen. A light version of the work was created in Slovenia in 2019, aimed at locals and the elderly.

In 2019, the work Georges received support from the Institut français and the Hauts-de-France Region for its distribution in Slovenia.