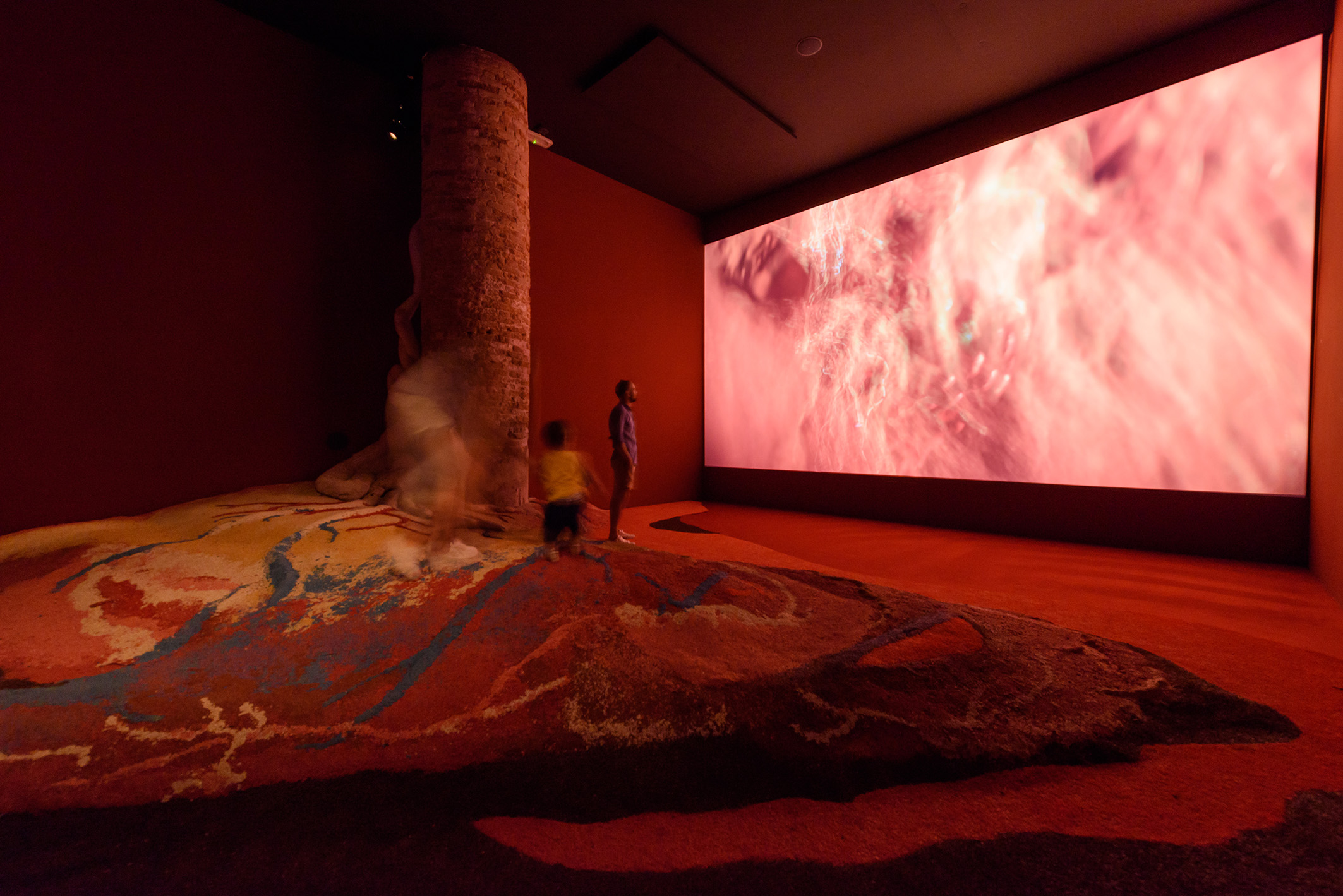 With the installation Grotta profunda Pauline Curnier-Jardin visually revisits the visions of Saint Bernadette de Lourdes. A voyage through a mystical cave.

An artist with a colourful universe

Specializing in visual arts, Pauline Curnier-Jardin primarily creates films in a colourful universe, where parody and the exaltation of the body are central.

Her first personal exhibition, “The Entertaining of the Shy”, was held in 2007 at the Rauma City Museum in Finland. Since then, the artist has exhibited around the globe.

The ecstasy of Saint Bernadette

The visitor enters Grotta profunda through a door in the shape of the enormous hand of a monstrous woman. Inside the cave, everything is pink, soft and enveloping, like the inside of a living organ.

In this disturbingly warm space, a film projects the visions of Saint Bernadette (played by Simon Fravega), famous for having seen a vision of the Virgin in the Massabielle Cave in Lourdes.

Through the chimerical images of this installation, the artist stages the initiatory rite of the holy against a backdrop of neo-pagan ecstasy and feminism.

From Basel to Toulouse

Grotta profunda was created in 2011 for the Toulouse Spring in September Festival.

A year ago at the Art Basel fair in Switzerland, Pauline Curnier-Jardin discovered a documentary film by Aurélien Froment on the history of paper in Basel.

Inspired by this correspondence between the work and the place, the artist then decided to work on a project that would be anchored in the regional territory by revealing a little of its past. His choice quickly focused on the story of Saint Bernadette in Lourdes, a place of pilgrimage for Christians around the world.

Under the Venice Spotlights

Grotta profunda by Pauline Curnier-Jardin was presented as part of the 2017 57th edition of the Venice Biennale, “Viva Arte Viva”. The commissions for this exhibition were entrusted to French curator Christine Macel, and highlighted live art.

Grotta profunda was exhibited in the Dionysus Pavilion, one of nine chapters along a pathway dedicated to mythology, trances and shamanism. Participation in this event, one of the most important and publicised in the world of art, gave the work significant visibility on the international stage.

The French Pavilion at the Venice international art and architecture Biennales is put on by the Institut français.