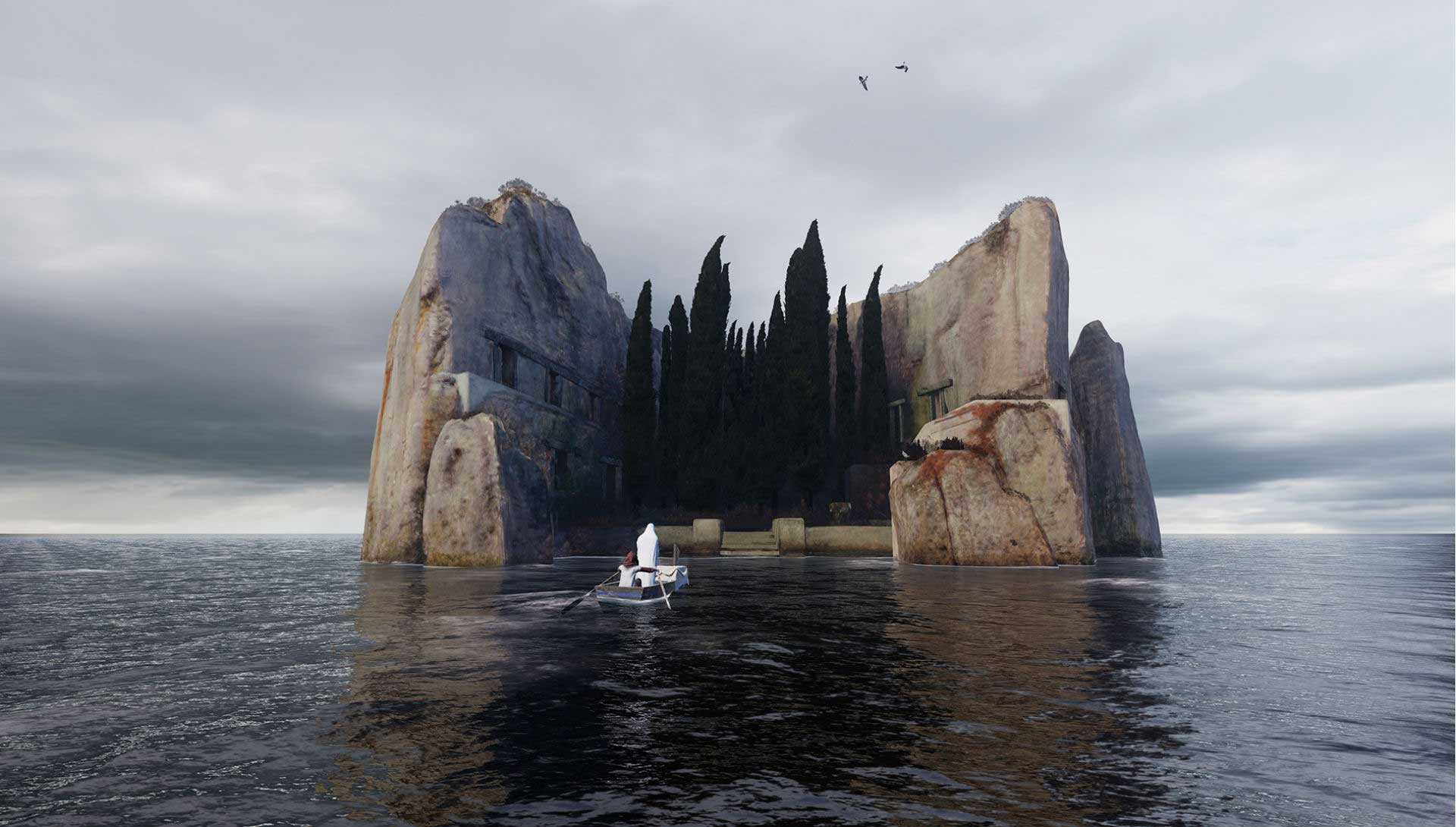 Between films and video gamesA virtual trip to the Isle of the DeadARTE, VR and paintingAn adaptation of the eponymous paintingThe Institut français and the project
Digital
#365
Work

Isle of the Dead (“L’Île des morts"), by Benjamin Nuel

Isle of the Dead is a contemplative journey in virtual reality by Benjamin Nuel, adapted from the famous, eponymous painting created by Arnold Böcklin in 1883. Isle of the Dead takes the viewer to the heart of this picture, in an immersion which enables us to better understand its meaning.

Between films and video games

A graduate of the École Supérieure des Arts Décoratifs in Strasbourg and the National Studio of Contemporary Arts - Fresnoy, Benjamin Nuel specialised in traditional cinema and video game creation before entering the world of immersive realities.

A virtual trip to the Isle of the Dead

The experience begins in a modern lounge. On the wall hangs the famous painting by Arnold Böcklin, Isle of the Dead... Little by little, the setting disintegrates and you find yourself on a boat, sailing slowly but inexorably towards what seems to be an island rising up on the horizon.

The viewer takes the place of a ghost on the table in the lounge, approaching the island and briefly experiencing the journey to the other side. The contemplative journey ends with the original framing of the painting, recreated in front of the viewer’s eyes.

Isle of the Dead is part of the Arte Trips collection launched in December 2018, bringing together experiences "drawing on the great masterpieces of European painting to create a new way of experiencing painting, in the form of an immersive narrative which is both sensory and documentary".

Arte launched a call for projects for this collection, which les Produits Frais entered with Benjamin Nuel. The project benefited from co-production by ARTE France and Les Produits Frais, and the participation of the National Centre for Cinema and Animation (CNC) and their Digital Experience Support Funds.

An adaptation of the eponymous painting

Isle of the Dead was originally a series of five paintings painted between 1880 and 1886 by the Swiss artist Arnold Böcklin. World-famous, the work has inspired numerous visual, musical, architectural and literary interpretations. The symphonic poem, inspired by the painting and created by Russian composer Sergei Rachmaninoff, is the soundtrack to Benjamin Nuel's VR film.

At the 2018 Venice Film Festival, Isle of the Dead received the prize for Best Story in the Venice Virtual Reality category. The work went on to win three other awards (Filmgate Miami, Entrevues Belfort et China International New Media Short Film Festival) and traveled to more than fifty international festivals.

Isle of the Dead (“L’Île des Morts”) is presented on culturevr.fr, an Institut français platform which offers a panoramic view of cultural innovation in virtual reality.

The work will also be presented to the participants of the Focus digital arts and creations, organized as part of Chroniques, the Biennale of digital imagination (12 November 2020 - 17 January 2021 ).

Find out more about the Focus digital arts and creations.