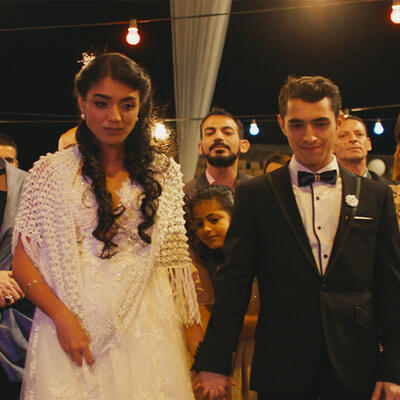 Let It Be Morning, a film by Eran Kolirin supported by the Aide aux Cinémas du monde

In Let It Be Morning, Eran Kolirin adapts Sayed Kashua’s eponymous novel to offer up his own view on the Israel-Palestine conflict. With his customary sense of the absurd, the director has made a poignant political piece in which populations remain the eternal victims of the war. The film received support from the Aide aux Cinémas du monde, co-managed by the Institut français and the Centre national du cinéma.

A regular at festivals

Born on 4 November 1973 in Israel, Eran Kolirin made his first feature film, The Band’s Visit, in 2007. This début attempt was well-received, and Kolirin presented the film in the Un Certain Regard section at Cannes Film Festival that same year, where he won the jury’s “Coup de Coeur” prize. After receiving critical acclaim, he won over 50 prizes worldwide, among them eight Ophir Awards from the Israeli Academy of Film. The following year, his second feature, The Exchange, was selected to compete at the Venice International Film Festival, and subsequently won the FIPRESCI Prize at the San Francisco International Film Festival. In 2017, his third film, Beyond the Mountains and Hills, was once again shown at Cannes Festival in the Un Certain Regard selection, as was his fourth piece, Let It Be Morning, in 2021.

A return to his roots

Adapted from Sayed Kashua’s eponymous novel, Let It Be Morning tells the story of Sami, a Palestinian-born Israeli who lives in Jerusalem. After attending his brother’s wedding with his own family, he finds himself trapped in the village of his birth when Israeli soldiers set up a roadblock. As he attempts to flee, he meets a taxi driver, Abed, with whom he attempts to understand the situation. Faced with increasingly chaotic events, Sami decides to take action and protest with the aim of curbing the ever-worsening living conditions.

A lampoon driven by hope

With Let It Be Morning, Kolirin once again evokes the bitter-sweet ambiance of The Band’s Visit, in a lampoon that shifts between comical and anxiety-inducing. In this adaptation of a text originally written in Hebrew, he cleverly portrays the conflict between Israel and Palestine without any of the all-too-easy tropes. Staying true to his absurd style, the director films this village cut off from the world with an authentic and sincere approach, through which he seeks to define the issues of war on the populations affected. Through this method, he explores the crises, be they personal or universal, that punctuate an existence, as well as addressing feelings of belonging. Between the lines, the filmmaker expresses a hope-filled sense of solidarity at the core of isolation and repression.

A flurry of prestigious awards

Shown as part of the Un Certain Regard Official Selection at Cannes Film Festival in 2021, Let It Be Morning represented Israel for the 2022 Oscars in the Best International Feature Film category. Released in France in spring 2022 (with the title Et il y eut un matin), it has won seven Ophir Awards, the Israeli equivalent to the Oscars. Winning the Best Director and Best Screenplay awards for Kolirin, the film has also garnered awards for its two lead actors, Palestinian co-stars Alex Bakri and Juna Suleiman. In addition, Let It Be Morning won the Student Jury Prize at the War on Screen Festival.

Let It Be Morning benefited from the support of the Aide aux cinémas du monde fund, co-managed by the Institut français and the Centre National du Cinéma.

The Aide aux Cinémas du monde is a selective fund reserved for projects involving feature films, animated films and creative documentaries aiming to be screened for the first time in cinemas.

Find out more about the Aide aux cinémas du monde