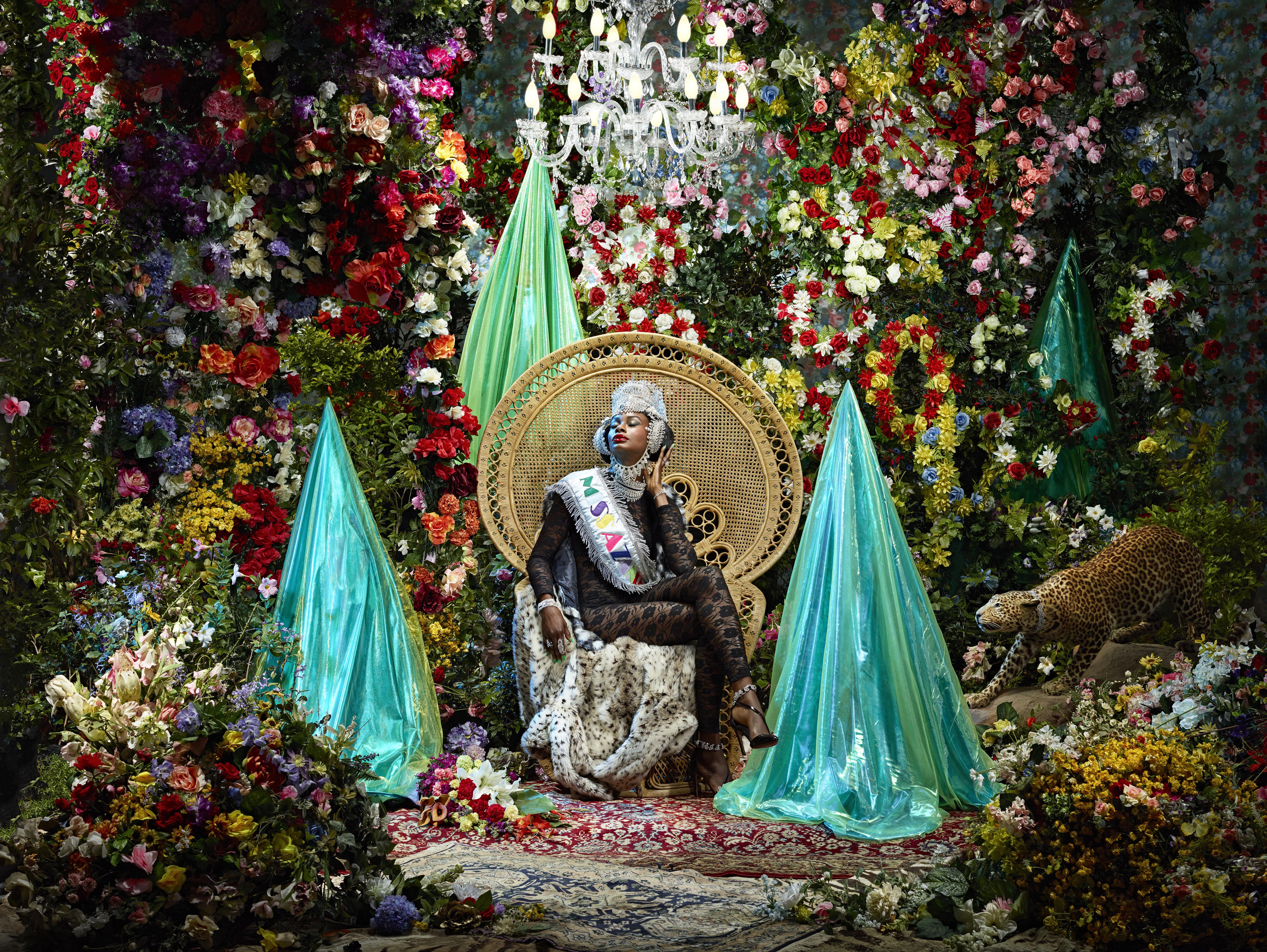 In Miss Azania, Exile is waiting, the image of a beauty queen allows the South African visual artist Athi-Patra Ruga to discuss one of his favourite subjects: Post-Apartheid inequalities.

A South African photographer and visual artist born in 1984 and living between Johannesburg and Cape Town, Athi-Patra Ruga has chosen to create his own mythology whose characters are used to criticise and parody the post-Apartheid political, social and cultural system, offering avenues for reflection on the future.

An internationally-recognised artist for his exploration of the boundaries between fashion, performance and contemporary art, he presented his performance The Future White Women of Azania: The Trial at the 55th Venice Biennale in 2013.

Created in 2015, Miss Azania, Exile is waiting depicts a beauty queen, Miss Azania, seated in a wicker throne and surrounded by bouquets and crowns of flowers.

The work is part of a series begun in 2010 entitled "The Future White Women of Azania", Azania being the name used during Apartheid by Black Nationalist groups to refer to free South Africa.

Remembering the promised land he heard of when he was a child, Athi-Patra Ruga wanted to recreate a hope, an ideal for which to fight.

Incarnated by Athi-Patra Ruga himself, who poses at the centre of the photograph, Miss Azania is a representation of nationalism and of the way it exploits the bodies of women, especially through beauty contests.

As a representative of a Utopian South Africa where everyone is equal, the work denounces persistent inequalities, which nationalist ideals tend to render invisible, and of which LGBT communities and disabled citizens are particularly the victims.

Miss Azania, Exile is Waiting was presented at the 11th Bamako Encounters– African Photography Biennial in December 2017 and January 2018.

The work contributes to Athi-Patra Ruga's international influence, as an artist whose work has been part of collective and solo exhibitions in Africa, the United States and Europe, such as “Under a Tinsel Sun” on the occasion of the third Moscow Biennial for Young Artists in 2012 or "The Elder of Azania” at the San Francisco MoMa in 2014.

Miss Azania, Exile is waiting received the Grand Prize at the 2017 Bamako Encounters.

The Institut français is a co-producer of the Bamako Encounters – an African Photography Biennial with the Ministry of Culture of Mali.