Presented at the Cité de l'architecture et du patrimoine since 2017, ScanPyramids VR is an immersive journey into the heart of the Great Pyramid of Giza. A scientific and educational exploration of one of the world’s greatest sites.

The story of ScanPyramids VR is first and foremost that of an international and multidisciplinary expedition initiated in 2015. This mission aims to explain the mysteries of the Pyramid of Giza using innovative technology, such as muon radiography, infrared thermography and 3D reconstruction. The agency Emissive, which specialises in immersive experiences, is involved, and alongside the Institut HIP and Dassault Systèmes it has begun using the data collected to reflect this unique research through a programme in virtual reality. Meanwhile, scientists made one of the greatest discoveries of 2017 when they uncovered a new hidden cavity inside the monument.

At the heart of Ancient Egypt

The ScanPyramids VR experience begins with a welcome from a tour guide in a room of the Cité d'architecture. Equipped with a backpack and VR headset, visitors head for the site of the Great Pyramid, which they are able to explore like any other tourist. Next, they delve into the mysteries of the monument in the footsteps of the ScanPyramids scientific mission and discover parts to which the public would otherwise never have access. Finally, their 45-minute tour ends with a journey back in time to the exact moment of the burial of the Pharaoh Khufu.

The ScanPyramids project is not purely educational in aim. The Institut HIP and Emissive are both particularly committed to preserving the cultural heritage of humanity through the use of new technologies. By allowing any citizen to visit this world heritage treasure from the comfort of their own home, ScanPyramids VR is doing important work in the transmission of knowledge. It is also limiting the harmful effects of mass tourism (with some 8 million visitors to Giza every year), which often endangers these vulnerable sites.

The first of the Seven Wonders of the World – and the only one still in existence after millennia – the Great Pyramid of Giza is one of the priceless monuments that continues to arouse the interest of researchers. Its unique architecture and 53,055 square metres still contain a host of hidden spaces, which no doubt explains the fascination that it sparks in people from all over the world. 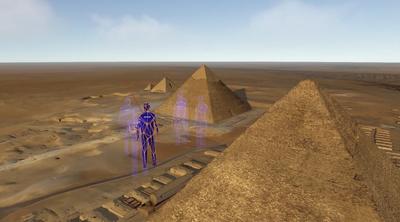 Emissive, which produced ScanPyramids VR, is presented in the Digital Mediation and Cultural Innovation catalogue, referencing some fifty organisations working in the cultural innovation and digital mediation sector in order to encourage the commercialisation of their knowledge and expertise abroad.

Find out more about the Digital Mediation and Cultural Innovation catalogue