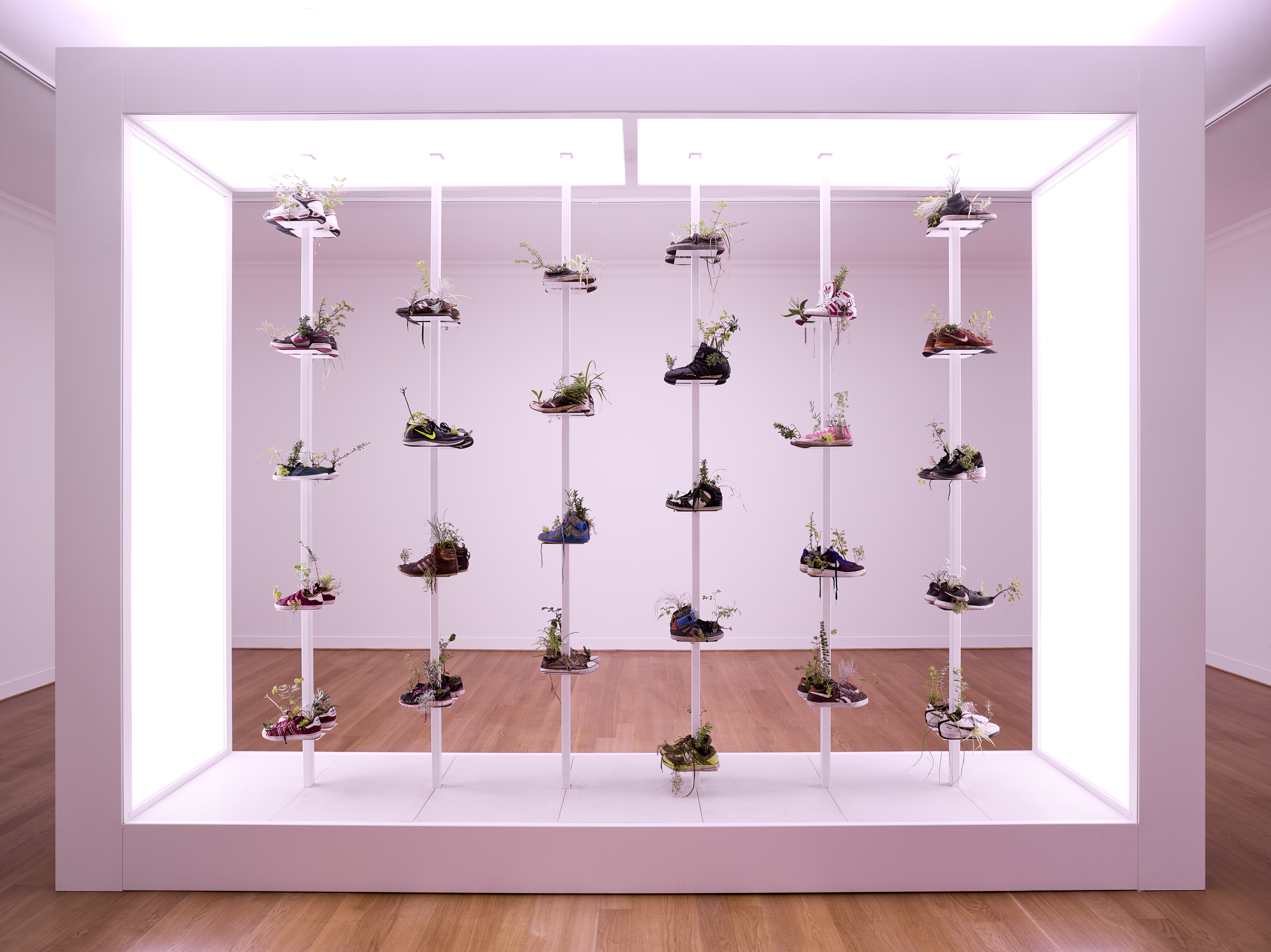 With an installation showing athletic shoes gradually overtaken by the plants he has potted in them, Michel Blazy urges us to question our habits of consumption.

Artist of the plants and the living

Born in Monaco in 1966, visual artist Michel Blazy has gained international renown thanks to his works using living materials.

A student at Villa Arson in the 1990s, he also uses everyday materials– such as food colouring in New Domestic amoebae– and plant elements, combining the two in Living Room II. In this way he creates constantly evolving works to better interrogate, with poetry and humour, the place of art in our society.

Influenced by the Arte povera– an Italian movement born in the 1960s, which defended the use of materials of little value in a consumer society – he creates the framework and the context in which the materials will mutate but does not constrain them, preferring to let them express their properties.

In 2017 for Shoe collection, Michel Blazy returned to the botanical elements found elsewhere in his work, planting different species in pairs of athletic shoes. A total of 27 pairs of trainers, emptied to make way for the plants’ roots and placed on posts forming a wall of flower shoe-pots.

Fed with water through the posts and light through the frame that supports the entire structure, the plants continue to grow, gradually devouring the shoes that become covered with moss and deteriorate over time.

Shoe collection is part of the narrative begun with Pull Over Time, an installation presented at the Lyon Biennale in 2015, where plants were installed in computers, smartphones or shoes, trainers used here to criticise and question the life cycle of objects in our consumer society.

Unlike this first work, where plant growth was dependent on environmental conditions, Shoe collection continuously ensures the plants prime growth conditions thanks to its irrigation and lighting system.

Presented for the first time at the 57th Venice Biennale in 2017 (“Viva Arte Viva”, under the direction of Christine Macel, Chief Commissioner of the Pompidou Centre), Shoe collection was then presented at Villa Sauber, at the New Monaco National Museum during the winter of 2017-2018, along with two other installations by the artist, Animal Skin (2011) and Soft Life (2004).

Also awarded Étant donné funding in 2018, Michel Blazy is receiving support for a solo exhibition at the Moody Center for the Arts in Houston.

The Institut français contributes to this Franco-American contemporary art fund created by the Cultural Services of the French Embassy in the United States.