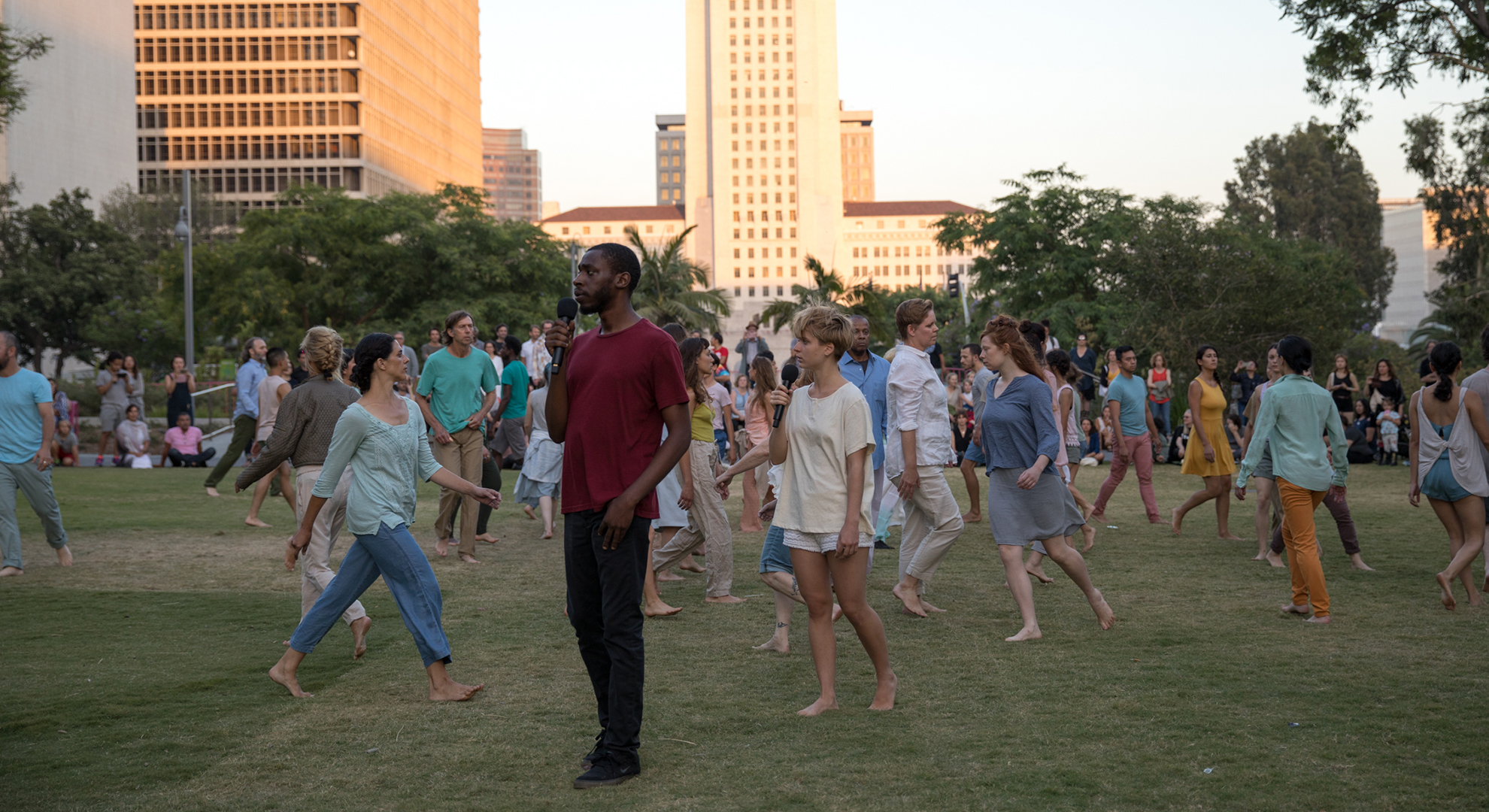 The Distance Is Beautiful, by Lola Gonzàlez (with Oguri and Paul Chavez)

A contemporary artist whose work combines performance, video and dance, Lola Gonzàlez was born in 1988 in Angoulême. In 2012, having obtained her diploma in plastic arts from the Lyon National School of Fine Arts, the young 24-year-old artist abandoned sculpture for her first passion, film-making.

Since then, the artist has created numerous videos and performances in which she most often gets her friends to appear, such as Nous (Us), a film co-produced in 2013 with the Noisy-le-Sec Galerie Centre d’art contemporain. She received the prix Le Meurice for contemporary art in 2016.

Art taking over the city

On 22nd July 2017, in the heart of Los Angeles, Lola Gonzàlez presented The Distance Is Beautiful. La distance la plus courte entre deux points n'est pas une ligne droite, a filmed performance featuring more than 60 dancers in small groups combining amateurs and professionals. They all progressed very slowly, as though in a parade, towards the same place: Grand Park, in the city centre.

Once gathered in the park, the participants began a series of movements alternating group dance steps and children’s games, like leapfrog. They then headed to the Arthur J. Will memorial fountain, where powerful effects of reflection and light gave the impression that the performers were floating on the water.

For The Distance Is Beautiful, Lola Gonzàlez worked with two American artists: Paul Chavez, a talented sound designer used to working in the art world, and Oguri, a choreographer and Californian buto dancer, who is a friend of Gonzàlez’. Oguri contributed to the development of this very slow and poetic choreography, where the bodies move as if drawn to a magnet and where individuals form a shapeless mass and compact groups in alternation.

The result is shocking: in the middle of metro trains or in the heart of the city, passers-by become the audience for a procession that shakes up their daily lives.

From France to California

The Distance Is Beautiful is the product of an international exchange and artistic partnership. In January 2017, Lola Gonzàlez was invited to spend several weeks in Los Angeles by the France Los Angeles Exchange (FLAX).

As part of the "Nuit des Idées" (“Night of Ideas”) organised by the French Consulate, she presented one of her first videos created 2011, To Believe in (“Y Croire”). Then came this mad idea for a giant performance. The project was developed for several months, then prepared remotely before being performed during the second part of the French artist’s residency in July 2017.

The Distance is Beautiful was created as part of a residence undertaken in Los Angeles in July 2017 at the invitation of the France Los Angeles Exchange (FLAX) foundation, in collaboration with the Institut français.