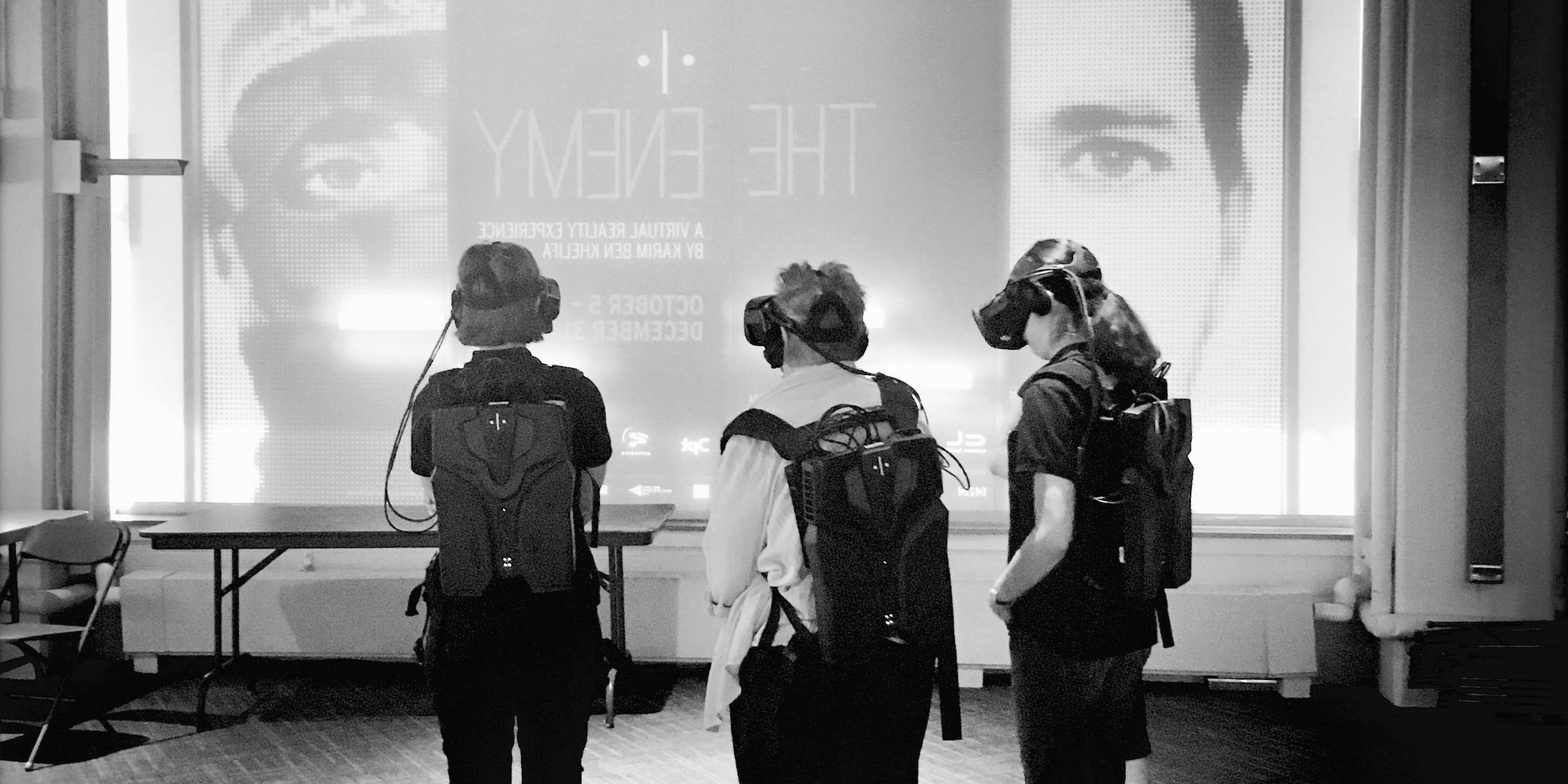 The Enemy, by Karim Ben Khelifa

The Enemy (2017) is both a virtual reality installation and augmented reality app that lies at the crossroads of journalism, science and technology. The work gives photographs of war new ways to tell their story.

Born in 1972, Karim Ben Khelifa has been a photojournalist and war correspondent since 2002. He has covered many conflicts – Palestine, Iraq, Afghanistan, Lebanon, Iran – and has worked with major newspapers and magazines like Le Monde, Vanity Fair or the New York Times.

A quest drives the photographer : that of giving meaning to images of war and changing opinions by always showing both sides of a conflict. He decided to withdraw from the front lines the day he became a father, to concentrate on a new objective : reinforce the impact his photos have.

A head-to-head between two enemies

The Enemy is a head-to-head between two enemies from three war zones : Salvador, the Democratic Republic of the Congo, and Israel and Palestine. The visitor walks around three separate rooms that look like a gallery, wearing a virtual reality headset and carrying a backpack containing a computer. Photographs taken by Karim Ben Khelifa hang on the walls and start up with sound when the visitor moves near them. The spectator therefore enters the characters’ world and is positioned between the two enemies, at the point where they catch each other’s eye.

The augmented reality app allows users to recreate the head-to-head at home, in their own environment.

Before being an interactive experience, The Enemy was first of all presented as an exhibition of photographs, notably during the 19thRencontres des Correspondants de guerre de Bayeux in 2012. Karim Ben Khelifa therefore chose to use virtual reality to « organise the meeting » between the spectator and the combatants.

It took four years to create this experience in VR. Each of the combatants had to be approached and persuaded to take part, then digitised in 3D: expressions and body language were at the heart of the approach. Studios were set up specifically in the war zones.

The VR installation of The Enemy was shown in the United States, Switzerland, Canada, Israel and France, notably at the Arab World Institute in Paris, which hosted the world première in May 2017.

Since then, the augmented reality app has been downloaded in 114 countries.

The Massachusetts Institute of Technology in Boston greatly contributed to this project by creating an experience relating to the user’s behaviour. By following where they look, the technology changes the story and therefore the experience encountered.

In 2019, Karim Ben Khelifa was a speaker at the writing residency of the VR Arles Festival.

The Institut français and the VR Arles Festival initiated in 2018 a writing residency dedicated to immersive narratives.

Find out more information about this residency programme

The Enemy is presented in the Catalogue VR Immersive Experiences, which references a selection of original works at the crossroads of virtual reality, live performance and visual arts. The aim of this catalogue is to make these new forms of shows and exhibitions discoverable, to facilitate their exploitation by cultural and entertainment venues around the world, and thus to contribute to the development of a market for this emerging sector.

Find out more information on the Catalogue VR Immersive Experiences