In this adaptation of the comic book by Christophe Blain and Abel Lanzac, Bertrand Tavernier has created a political satire in which he wields his acerbic gaze to great effect.

The son of the director of a literary journal, Bertrand Tavernier has always had a close relationship with the written word. His first feature film, The Clockmaker (“L'Horloger de Saint-Paul”) (1974), is an adaptation of a novel by George Simenon. From Jim Thompson (Coup de torchon, 1981) to Madame de La Fayette (The Princess of Montpensier (“La Princesse de Montpensier”), 2010), other authors become part of his universe.

The other major inspiration for the French director’s work remains society and its institutions, often sharply observed (L.627, 1992). In adapting The French Minister (2013), a comic book by Christophe Blain and Abel Lanzac, he brings these two angles together in a black comedy.

At the heart of French diplomacy

Inspired by the story of diplomat Antonin Baudry (aka Abel Lanzac) when he was an advisor and speech writer for French Prime Minister Dominique de Villepin (from 2002 to 2005), The French Minister describes the career of Arthur Vlaminck, a young administrator hired as the official speech writer for the Foreign Affairs minister, Alexandre Taillard de Worms.

In this prestigious position, Arthur Vlaminck discovers a flamboyant personality, ducks the blows of a court of advisers consumed by their ambitions and, despite the inertia of power, writes a speech which is presented at the United Nations.

In the filmography of Bertrand Tavernier, where period films meet social chronicles, The French Minister is the first true comedy. Adapted from a comic strip in a satirical style with sizzling dialogue, this film gave the filmmaker the opportunity, as he says, “to explore a new world”.

The main challenge was to find a way to transmit, through cinema, the wild style of the original graphics. With the two comic book authors by his side, Tavernier thus instilled a dose of absurdity by causing papers to fly everywhere each time the minister appears and using brutally long silent pauses.

Back to New York

Thanks to its subject and certain scenes based in popular memory (the film's final speech echoes Dominique de Villepin's speech at the UN on 14 February 2003 to denounce the war in Iraq), The French Minister has an international appeal.

Premiered at the Festival de San Sebastien and distributed in a dozen countries, in March 2014 it notably had the honour of closing the Rendez-Vous with French Cinema organised by UniFrance in New York. This was a moment which succeeded in arousing the curiosity of the American audiences and critics, who enjoyed the film’s light tone. 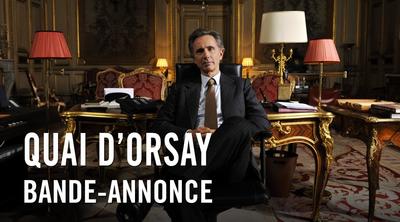