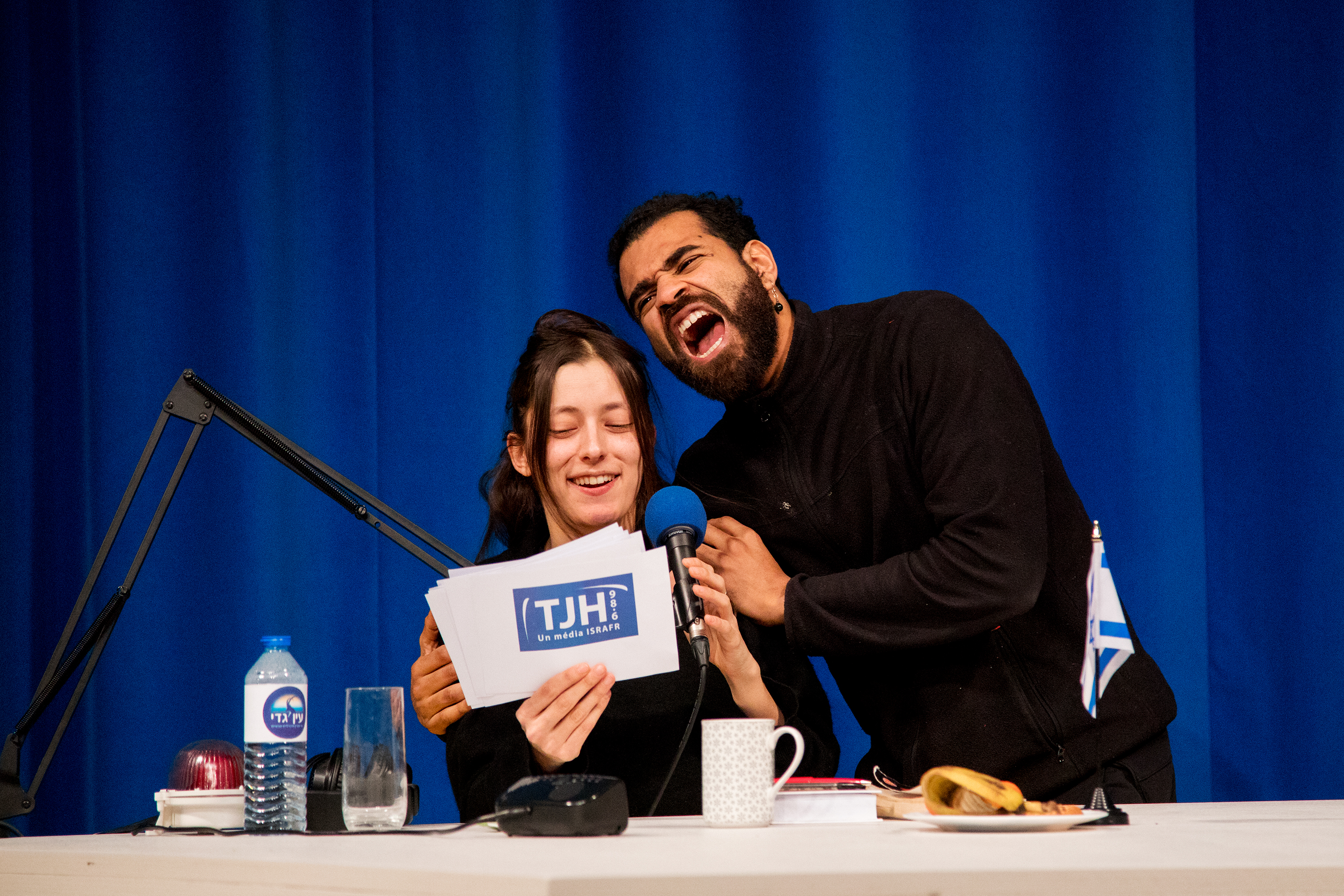 The eye of an exileTo be Jewish or not to be?Number twoFrom Israel to FranceThe Institut français and the work
Theatre
#386
Work

The second instalment in Trilogie de ma terre (Trilogy of my land), The Jewish Hour stands out as an acerbic farce about the Israel-Palestine conflict. Beneath the gloss of a scathing burlesque, Yuval Rozman explores what it means to be Jewish in France today.

The eye of an exile

A graduate of the Tel Aviv Conservatory, Yuval Rozman began to create his first pieces at 18 years of age. Supported by Palestinian actor Mohammad Bakri, he created Cabaret Voltaire (2011), a show that won numerous awards, notably best play at the C.A.T. International Theatre Festival in Israel. The next part of his career was in France, where he moved in the mid-2010s, supported by director Hubert Colas and actress Laetitia Dosch, with whom he co-wrote Un Album (2015). After several writing residencies (Marseille, Lille), he created TBM – Tunnel Boring Machine (2018), the first instalment of Trilogie de ma terre, set against the backdrop of the Israel-Palestine conflict.

To be Jewish or not to be?

This evening is the grand première of the radio show The Jewish Hour. On this show verging on amateurism: an inaudible Ukrainian sportsman, incessant fund-raising appeals, and a very special guest, philosopher Bernard Henri-Lévy. On the stage rigged in a ramshackle radio studio, three actors (Stéphanie Aflalo, Gaël Sall, and Romain Crivellari) ramp up the chaos until excess, violence, and a final train wreck – the assassination of BHL – transform the setting into a statement on war via a captivating musical finale.

The Jewish Hour is part of the Trilogie de ma terre, a project originating in Yuval Rozman’s questioning of identity when he decided not to finish his mandatory military service. The author makes a question – “What is my role, as a living being who is Jewish and Israeli, in relation to Palestinians?” – the beating heart of this triptych in movement. Because, while the common thread running through these pieces is the Israel-Palestine conflict, each text has its own specificity. TBM – Tunnel Boring Machine is a political and private journey into the history of the two countries. The Jewish Hour is about religion and relates back to Rozman, the author who rediscovered his Jewishness in France. As a conclusion, Adesh will address the economic foundations of this war.

From Israel to France

An author celebrated in festivals around the world (C.A.T. International Theatre Festival in Israel, the Actoral festival, Festival international des arts & des écritures contemporaines in Marseille, Festival d'Automne in Paris), Yuval Rozman is an emerging figure on the contemporary scene. His exile gaze between France and Israel gives The Jewish Hour, and his trilogy in general, an authentic international resonance. The play was also supported by the Beaumarchais-SACD Foundation as part of its grant for stage writing.

Having been chosen for a Residence Sur Mesure, Yuval Rozman stayed in Jérusalem and Palestinian Territories to work on Adesh, the third instalment of the Trilogie de ma terre.

Find out more about the Résidences Sur Mesure programme