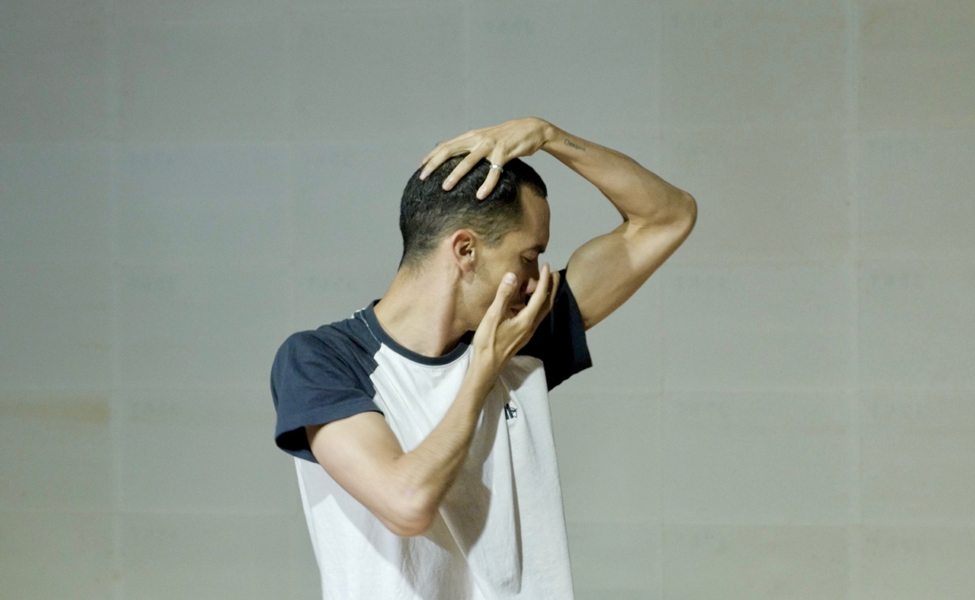 Taking inspiration from ancestral Japanese arts, Benjamin Karim Bertrand has created the solo Vestiges (2020) based on memory and the traces left by bodies and minds. The piece is born out of a host of filmed sequences driven by the inwardness of movement.

On the diversity of dancing

After training in contemporary dance at the Conservatoire à Rayonnement Régional (CRR) in Paris, Benjamin Karim Bertrand began his career in 2011, first as a dancer – in pieces such as La Princesse de Milan by Karine Saporta (resumed in 2011) and Tragédie by Olivier Dubois (2012) – then as a choreographer in 2015 with his solo Orages with his company, Radar, and in 2017 with the Rafales duo.

Alongside his career as a performer and creator, Benjamin Karim Bertrand studies philosophy, preparatory classes in literature, and at the Sorbonne. Also collaborating with visual artist Jean-Luc Verna, (La) Horde contemporary dance collective, and pop artist Christine & the Queens, Benjamin Karim Bertrand likes to ground his choreographic practice in different artistic fields. For his new piece, Vestiges, he immersed himself in Japanese theatre forms.

The set unadorned, the stage bare, Benjamin Karim Bertrand dances alone on stage for Vestiges, a solo about memory and forgetting the movements that we inherit. His dancing is intentionally plentiful with a plurality of movement, allowing emotion to be born out of inwardness and precise movement. The dancer questions the vestiges that a body or mind can leave behind, like footsteps in the sand. It is a disappearance or is it a presence that remains in our memories? By using the process of repetition, Benjamin Karim Bertrand wants to “learn how to create memory and resonate with ghosts”, to borrow the words of philosopher Donna Haraway. He is inspired by the myth of the Lethe, one of the five rivers of the Underworld, which allows the souls of the dead to be reborn after crossing it.

Benjamin Karim Bertrand first performed Vestiges in Kyoto and it was no accident that he chose the Japanese archipelago for this creation. For this piece, the choreographer wanted to work alongside Tatsushige Udaka, the Noh theatre actor, a traditional Japanese performing art that first appeared in the 14th century and favours slow movements. He also discovered bunraku (large puppets that emerged in the 17th century) and butoh, a much more recent theatre form originating in the second half of the 20th century. Benjamin Karim Bertrand put together his solo, Vestiges, by practising these different movements and studying their philosophical and personal foundations where the worlds of the living and the dead are constantly connected.

In 2018, Benjamin Karim Bertrand was selected to spend time at the Villa Kujoyama, a residency for artists in Japan supported by the Institut français. He realized Vestiges at the end of his residency.

Find out more about Villa Kujoyama.