workscross
Soul Sister from UgandaMusic as a driver of social changeAkogo and amadinda, Sandra’s instruments From Kampala to the Cité Internationale des ArtsThe Institut français and the project
Music
Work

On her first album, Ye’nze, the Ugandan singer Sandra Nankoma marries soul and traditional music to defend the cause of women in her country.

Born in 1988 in Kampala, Uganda, Sandra Nankoma has a degree in visual arts (painting and sculpture) from the Uganda Christian University. In 2012, she eventually began to turn towards a musical career. She performed on stage for the first time in 2013 at the Bayimba International Festival of the Arts in Kampala, under the name “Sandy Soul”. Following a collaboration with the Kenyan group Bantu Clan vs Sarabi on Africa Ni Leo and several EPs in 2014, she released her first album, Ye’nze, in March 2018.

A singer-songwriter, Sandra Nankoma is also an actress, the co-founder of Afroman Spice, a 100% woman-run company, and a photographer. In 2017 in Kampala, she presented the “Melanin Kaddugala” exhibition in which her portraits of women in black and white denounce stigma based on skin colour.

Sandra Nankoma is also involved in the fight against AIDS through the “Tuli Wamu Nawe” project, created by the Public Health Ambassadors Uganda and supported by the African Women’s Development Fund in 2015.

Music as a driver of social change

In an Afro-urban style, the album Ye’nze (“It’s me” in Luganda and Lugwere) by Sandra Nankoma marries jazz, soul, blues, folks and traditional music from eastern Uganda, from where she originates. With the profound and sensual voice of a soul diva, reminiscent of Farida Sonko, Miriam Makeba, Anita Baker and Erykah Badu, she sings about the fight for survival, the powerlessness of Ugandan politics and, in “Kaddugala”, the discrimination against black women which pushes them to bleach their skin.

Although Ye’nze also contains love songs, its goal is to contribute to societal change and specifically to defend the cause of Ugandan women.

For Ye'Nze, Sandra Nankoma worked with Kaz Kasozi, a producer and the artistic director of the Little Room Studio in Kampala, who plays most of the instruments on the album (guitars, bass, drums, keyboard).

Self-taught, Sandra Nankoma plays the akogo, a thumb piano from North-east Uganda and the amadinda, a xylophone from the East of the country. She sings in her two native languages, Luganda and Lugwere, and in English, thus linking American soul music to its African roots.

From Kampala to the Cité Internationale des Arts

Ye’nze was composed and finalised in France during Sandra Nankoma’s residency at the Cité Internationale des Arts in Paris, as part of the “Visa pour la creation” programme, between August and October 2017. Recorded in the Little Room Studio in Kampala, it was mastered in France by David Felgeirolles, who also produced two of its songs, “Mercedes” and “It’s Alright”.

The same year, Sandra Nankoma also received support from the “Parcours” programme by the Barbara-Fleury Goutte d’Or Centre in Paris, which allows musicians to access personalised support for recording sessions, production and their development strategy. 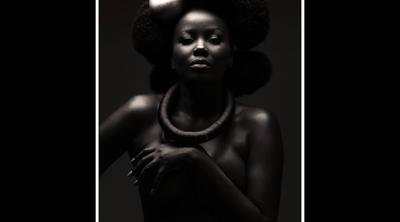 A beneficiary of the Institut français Visas for Creation programme, Sandra Nankoma composed the album Yen’ze during her residency at the Cité Internationale des Arts in 2017.