Crossing the borders that prevent people from moving towards each other: this desire, which is at the heart of the practice of choreographer Yuval Pick, is the basis of the Passerellesproject. Born in Israel, the director of the CCNR studied in Tel Aviv with the Batsheva Dance Company, before supporting major international dancers such as Carolyn Carlson and Russel Maliphant, then setting up his own company, The Guests, in 2002. By supporting this project of artistic, cultural and human exchange between Israel and France, the choreographer is extending the connection that binds him to his country of origin.

The Passerelles project began in 2015, at the impetus of Sharon Eskenazi, assistant to Yuval Pick and founder of the Danser sans frontières association, when 12 amateur dancers from Rillieux-la-Pape near Lyon hosted 12 of their Israeli and Palestinian counterparts from the Gsharim/Jusour group, based in Kafar Yassif in northern Israel, at the CCNR.

Having arrived in France in 2013, Sharon Eskenazi had previously worked in Israel on uniting Israelis and Palestinians through dance. Passerellesis an extension of this passion. The first two gatherings, in February and December of 2015, enabled French and Israeli dancers to get to know each other and bounce their practices off of each other. These exchanges took place in an open master class, supervised by Yuval Pick, and also within a film combining shots of the workshops and testimonials about this unprecedented experience.

Since May 2016, the documentary has been shown to over 400 students in the Lyon region. In Rillieux-la-Pape, where many different communities sometimes struggle to live alongside each other, this kind of project is particularly meaningful. The blend of the Gsharim/Jusour group, made up of Jews, Christians and Muslims, resonates with the diverse origins of the city’s youth and dialogue naturally sprang up. So much so that dancers decided to meet again in 2018, for a second edition of Passerelles. 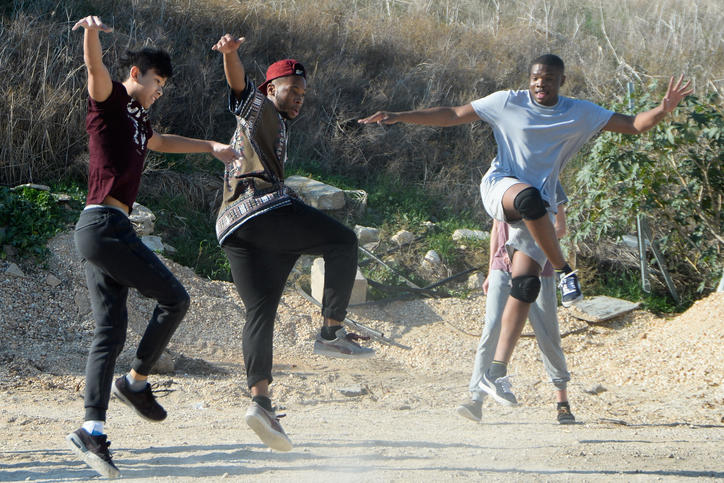 Between the urban and the infinite

Since January 2018, the 24 young dancers have thus developed, under Yuval Pick’s leadership, a group performance that unites bodies, voices and rhythms, beyond individual differences. The show, Flowers Crack Concrete, is the result of this productive project and exchange between dancers driven by shared values of peace and tolerance.

Yuval Pick’s method, in which the group is nourished by the strength drawn from each individual, serves as a catalyst for the choreographic project. Although geographical distance sometimes makes the work complex – the two groups are only able to meet for rehearsals twice in Israel, in February in Kafar Yassif and in July in Haifa – the dancers nevertheless manage to collaborate and discover a unique form of expression.

Presented in a preview in Haifa on 21st July, then at the CCNR on 14th September as part of the 2018 France-Israel season, Flowers Crack Concrete was then performed at the 18th Lyon Biennial, on 15th and 16th September. Its auditory universe combines voices and urban rhythms to evoke the environments from which the dancers have come. In a circular movement with endless contours, the dance presented by Yuval Pick, Sharon Eskenazi and associate choreographer Emilie Szikora above all gives meaning to this simple and symbolic gesture: extending a hand as a necessary step towards rediscovering the other. 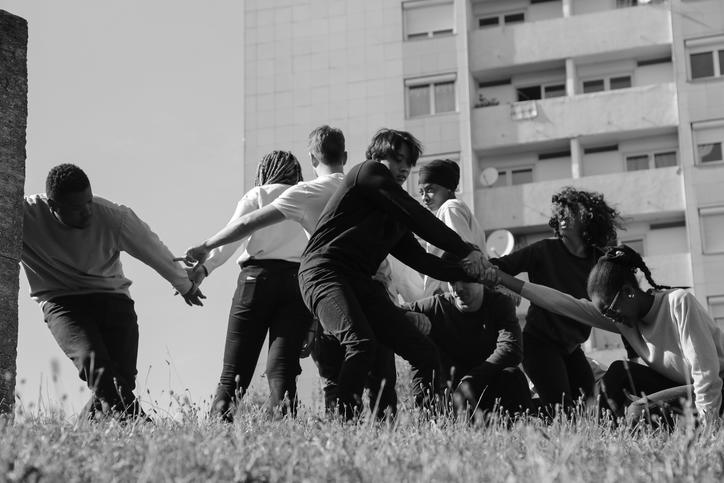 © Alain Eskenazi
The 24 French and Israeli dancers met in January 2018 in Rillieux-la-Pape during workshops as part of the Passerelles project.
The Institut français and the project
Image

Flowers Crack Concrete, the result of the Passerellesproject, was performed on 14th September 2018 at the Centre chorégraphique national de Rillieux-la-Pape as part of the France-Israel Season 2018.

The 2018 France-Israel Season (June-November 2018) is organised and implemented by the Institut Français, the Ministry of Foreign Affairs of the State of Israel, and the embassies of both countries.